Air of Europe for Averoff 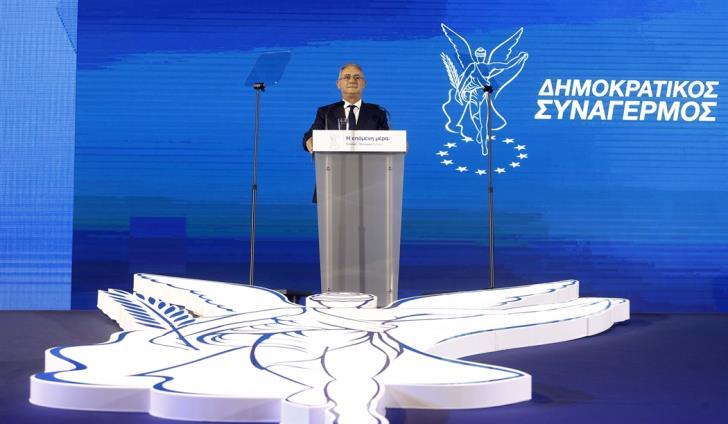 Strong support from President Anastasiadis, Greek Prime Minister Kyriakos Mitsotakis and EPP President Manfred Weber was received overnight by DISY president and presidential candidate Averof Neophytou, at the beginning of the ideological-political congress. A conference with strong elements of invocation of the alarming feeling and clerical stigmas in all its concept, which took on the character of a pre-election rally and a call for unity of DISY and prevention of division.

The beginning of the conference was particularly characteristic with the sounds of the Cretan lyre in the rhythm of the song: “When will he do xasteria”. The favorite song of Glafkos Clerides with which the historical executives of the party were identified in the first years of the political action of the party. & Nbsp;

Even the opening film had a strong imprint of Glafkos Clerides, from the founding of Democratic Alarm in 1976 until today, with special stations in 1993 with DISY becoming Government for the first time, in 2013 with the election of Nikos Anastasiadis and reaching 2023 with Averof Neophytou entering the battle to take over the baton./p>

In the front row of seats, Glafkos Clerides's daughter, Kaiti, along with other historical party officials. & Nbsp;

Everyone's eyes, of course, were on Nikos Anastasiadis, who took the last step on the podium, sending a strong call to the alarmed world to preserve the unity of the party, mobilized around the leading personality of Averof Neophytos. He even called on the alarmists to turn a deaf ear to what is being said or deliberately leaked, stating strongly that he himself will not allow the Democratic Alarm to live again in the days of 2003 with the split of the faction.

“I want to remind you “Glafkos Clerides lost the elections in 2003 as a result of ambitions that led to a split and loss of power, with what followed for the next decade until we take power again”, said among others Nikos Anastasiadis. & nbsp;

< p>To close his intervention in an even more intense way. “For me, one is the choice. The choice of Averof Neophytos. From today you are invited to work in a way that we know. I call on you to stand by our side. Do not demolish the house you built. “Only in this way will there be security, stability and continuity of progress”, stressed President Anastasiadis, who during his speech gave an account of the works of his government.

The Greek Prime Minister Kyriakos Mitsotakis was particularly enthusiastic about his position, who was applauded both at his entrance and during his stay on the podium. Which he also commented thanking for the warm welcome he received. He stressed that he is in Cyprus to express his support for his friend Averof Neophytos. & Nbsp;

“Dear Averoff, under your leadership, DISY recorded consecutive electoral victories. “In your new effort, you will be accompanied by the support of all of us, in order to prove once again that the Alarm is the line of great goals and great successes for the good of the Cypriot people”, he said.

O EPP President Manfred Weber stressed in his speech that Cyprus needs good leadership. “With Averof Neophytou as your presidential candidate for 2023, you have an excellent and dedicated political leader, a convinced European, fighting tirelessly and with passion for Cyprus,” he said, expressing hope that Cypriots would trust Averof Neophytou. ;

Averoff: Development path away from populism

The president of DISY, going up to the podium, made a position on all the issues, giving the stigma of the political positions and the course he wants to chart. He stressed the successes of the Anastasiadis government on which the next five years will be built and outlined his vision for a strong growth economy, away from populism. From the podium of the conference, he addressed Kati Clerides in particular about the achievement of Cyprus's accession to the EU achieved by Glafkos Clerides and spoke about the goal of Cyprus's accession to NATO after the solution of the Cyprus problem. “The patriotic realism of Glafkos Clerides guides us: And for our foreign policy. And for our national issue. “But also for internal governance,” he said. He also sent a message of unity to the party, stressing that the dilemma of the elections is whether progress and development will continue or whether they will let the opposition take its place back. “And in their inability to stand against us, they support candidates who offered to overthrow our party”, as he stressed.

the person in charge of the conference Michalis Sophocleous.

Tribute to Zeta: Before the start, a special tribute was made to Zeta Aimilianidou with a video from her action as a minister, while a one-minute silence was observed. The emotion on the face of Nikos Anastasiadis was obvious, with the President hardly able to hold back his tears.

In a friendly atmosphere, lunch in Stasikratous

Before the conference and after his meeting with President Anastasiadis, the Greek Prime Minister Kyriakos Mitsotakis was hosted with his entourage in a well-known restaurant in the center of Nicosia. The president of DISY, Averof Neophytou, had a lunch at the delegation of the Greek Government. The dinner was attended by the Speaker of Parliament and one of the vice-presidents of the party Annita Dimitriou, as well as the entire leadership of Pindar, the vice-president Haris Georgiadis, the parliamentary representative Nikos Tornaritis, the vice-presidents George Georgiou and Efthymos D Dimitris Dimitriou.

During the lunch, the whole range of issues related to the relations between the two countries were discussed. The menu included salad and appetizers for a first course, a choice of steak or fish for main and sweet anakromak.