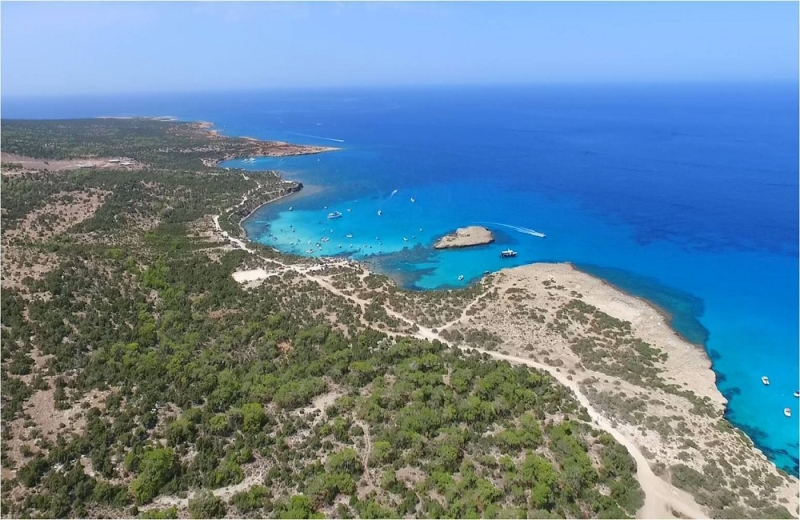 The review of Akama's local plan has been pending for years. On the one hand, there is pressure from the residents of the communities who want to exploit their property, and on the other, ecological organizations and more, who want to protect Akamas from any development. Somewhere in the middle, the other interests intervene, the business ones, who want the development of Akamas with mansions and hotels in addition to the existing ones on the outskirts of the peninsula.

The chairman of the Parliament's Interior Committee and AKEL MP, Mr. Aristos Damianou, denounced that the revised local plan of Akamas, as it is launched by the rulers, is intended to serve specific interests. According to Mr. Damianou, “the economic interests at stake around the Akamas region are enormous”, stressing, at the same time, that interests are placed above people's lives and the protection of the environment. The president of the Environmental Movement, Mr. Charalambos Theopeptou, made similar statements. As he said, the Anastasiades government likes to build everything. Complaining that a proposal was put on the table for the creation of roads and pavilions on beaches and in the state forest of Akamas in order to “bring electricity and water to the area in order to make it easier to build mansions”. Complaints for serving interests and for the destruction of Akamas with what is being launched by the rulers were also heard from other environmental and non-governmental organizations, from organized groups, etc.

The projects that will be done

But what exactly is underway on the Akama Peninsula? According to the competent Minister of the Environment, Mr. Costas Kadi, in a few years Akamas will not be as we know it today. He will be much better. Pointing out, at the same time, with his statements to “P”, the following: “Personally, I imagine Akamas in 10 years in a much better state of preservation than it is today. And this because in Akamas the disorder observed today will be limited. Within the National Forest Park, a series of arbitrary and illegal roads over 100 kilometers fragmenting the natural ecosystem will be cut, active biodiversity conservation measures will be implemented, the road network will be improved in an environmentally friendly manner so that the habitats of of the area from the dust we see today, there will be information and awareness points for visitors about the value of the area, there will be an organized system of cleanliness and surveillance of the area. I also imagine the communities on a path of recovery and sustainable development, leaving behind the withering that is observed today”.

Akama's revised local plan includes provisions for farms, accommodation and other developments. We asked Mr. Kadi directly: Will you hand over Akamas to the entrepreneurs? To answer as follows: “The interconnection of the Akama park with the communities will enable them to develop catering and accommodation activities for visitors, which, of course, will not be able to have such services inside the protected area. The large “fillets” that if left to develop would bring huge business profits are located in the heart of Akamas, within the Natura 2000 network area. In these areas our exclusive priority is to preserve nature and therefore the possibility of development with based on the proposed local plan is zero. So, I find the complaints about serving business interests to be misplaced, not to say offensive.”

Asked by “P” to comment on the accusations attributed to him for serving business interests, Mr. Kadis answered verbatim: “The chairman of the Interior Committee, as well as anyone else who refers to the serving of interests, should name these interests . What and who does it mean and who do we want to serve with the local plan? Unless they mean the people of the primary sector and the small landowners who will be able to create, not in a protected area, but in a purely rural area, a farm that can be visited, through which, alongside the agricultural activity, the visitor will be given the opportunity to come in touch with and appreciate our agricultural products, tradition and cultural heritage. They should tell us, after all, whether or not we want agritourism activities in rural areas.”

In his reply to “P”, Mr. Kadis indicates that the institution of the visiting farm will not operate arbitrarily and uncontrollably in Akamas and elsewhere, but will be enshrined in legislation which is currently being prepared. “The primary activity of these farms will not be the tourist activity, but that linked to the primary sector, which will be proven by their turnover. This legislation will obviously pass through the Parliament and therefore Mr. Damianou, and any other member of parliament who wishes, can put in as many safeguards as he thinks should be put in place for the proper operation of these infrastructures”, he added.

Proposal of a law in Parliament to block any deployments

A proposal for a law to prevent any developments in Akamas was jointly submitted before the plenary session of the Parliament for a vote by the MPs Aristos Damianou on behalf of AKEL and Charalambos Theopeptou for the Environmentalists. In particular, the proposed law provides for the prohibition of the issuance of a planning permit in the areas where a local or regional plan is prepared or modified during the period of submission of written reasoned objections to the Minister of the Interior and during the period of their examination. According to Mr. Damianou, the proposed law aims to avoid urban planning arbitrariness, environmental damage during the exact period when objections around a local plan will be examined. “The bill was tabled in the wake of our concerns about what is emerging in Akamas and the new local plan being worked on. Of course, it will concern other similar incidents in perpetuity”, commented the MP of AKEL, Aristos Damianou. For his part, Mr. Theopeptou stated that based on the current legislation, a town planning plan is published, goes into public consultation for four months where anyone can submit objections and for a long period of time is processed by the Town Planning Department until it receives the final approval approval by the Council of Ministers and to be finalized. “You understand what a bag can be opened and what corruption can exist just by announcing a local plan,” he indicated. With the president of the Environmentalists calling on the opposition parties to vote on the controversial bill, which was discussed for the first time last Thursday before the parliamentary Home Affairs Committee. At the session in question, the Department of Town Planning and the Legal Service expressed their disagreement on the passing of the disputed law proposal, the discussion of which will continue next week.

Environmental organizations complain that the Anastasiades government is putting pressure on various government agencies and departments to withdraw their objections to Akama's revised local plan. And for this reason, we brought to Mr. Kadi's attention the example of the Game and Wildlife Service, which in just a few 24 hours changed its positions regarding the local plan of Akamas. Mr. Kostas Kadis was categorical: “The government does not put any pressure on the services, on the contrary, it tries to ensure that the competent services will be left undisturbed to carry out their work within the framework that the legislation imposes.” With the Minister of the Environment denouncing the following: “Pressure is exerted by organized groups that urge the ministries and agencies to move in one direction or the other. At this point I would like to point out that it is an oxymoron scheme on the one hand to say that there are discounts for Akamas and on the other hand that the services do their job very well and should not be pressured. Is it up to someone to decide which of the two is true? As long as government agencies are doing their job well, everyone should respect them and let them complete their work. What I want to assure everyone concerned is that as the political head of the Ministry of Environment, I not only do not interfere in the work of the competent services of my ministry, but I provide them with every support so that they can carry out their work as best as they can”.

The role of presidential

Even messages to “black out” candidates in the upcoming presidential elections were sent to party offices regarding Akama's local plan. Asked to comment on the information in question, Mr. Kadis made it clear that the government is determined to move forward with this matter. In particular, he stated verbatim: “It must be understood that the formation and publication of the local plan of an area is a complex process that requires the involvement of many services and is by its nature time-consuming. If we add to this admission the fact that this local plan concerns one of the most important and sensitive areas of our country, and that its publication has been pending for decades, you realize how difficult this project becomes. Despite the above facts, the government is determined to proceed with this matter fully respecting the institutional framework and the procedures provided for in the relevant legislations”.

Why is Kostas Kadis expressing his disappointment< /strong>

In the end, what do we want?

Mr. Kadis in his statements to “P” did not hide his disappointment at the fact that there was no conclusion to a common vision that would ensure the long-term preservation and protection of the Akama peninsula. He stated characteristically: “Most of us in Cyprus have an opinion and a vision for Akamas and some form of connection with the region. Either as permanent residents of the area who live their daily lives with the problems and benefits that the area provides, or as professionals who live from activities connected to Akamas, or as simple visitors who love the landscape, the beaches, the unique nature, either as hunters and fishermen, or as landowners in Akamas looking for the value of their property, or as scientists or professionals who have studied or manage elements of the area such as its biodiversity, etc. If you ask all of them they will all tell you that they want the protection and sustainable management of the Akama Peninsula. However, when the question is narrowed down to 'how can this be done?', everyone from their position, their role and their connection to the region, will give their own different answer. What I want to say is that as a society we have not yet been able to agree on a common vision that ensures the long-term preservation and protection of the natural and cultural heritage of the region, while offering tangible benefits to the local communities that are an integral part of it. And this is exactly what we want to give to the region with our designs: protection as an apple of the eye, but also highlighting the natural and cultural heritage of the region and at the same time creating conditions for sustainable development for the communities”.

Source: politis.com.cy
Share
Facebook
Twitter
Pinterest
WhatsApp
Linkedin
Telegram
Previous article
Clelia Vassiliou: The President and the Government are on the side of mountainous Larnaca
Next article
Vinicius continues in the Super League with a Cypriot teammate
- Advertisement -