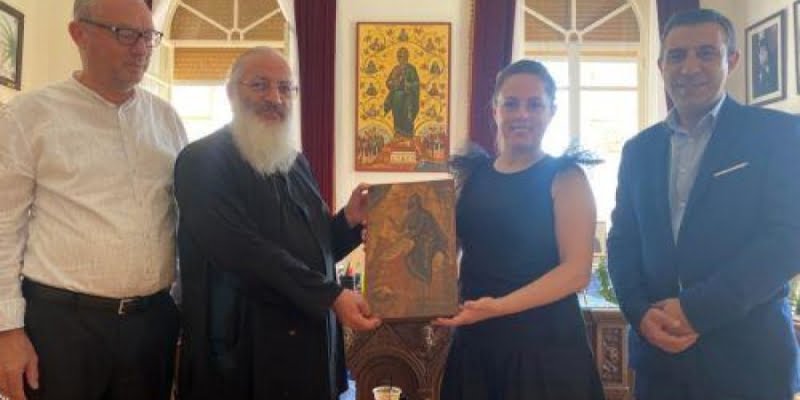 Bishop Christoforos of Karpasia received on Thursday during a ceremony at the Holy Archdiocese of Cyprus, an icon of Saint John the Baptist, which was brought from Cyprus to the United Kingdom in 1974 by a Royal Air Force pilot.

An announcement states that the icon was handed over to Bishop Christophoros by art historian Maria Pafiti, who represented the anonymous donor (former owner), as well as Marc-André Renold, professor of Art and Cultural Heritage Law at the University of Geneva and holder of the UNESCO Chair in International Cultural Heritage Law, with whom he collaborated for the repatriation of this image.

Present at the handover were the secretary of the archdiocesan office, Michalis Pavlou, the deacon Michalis Nikolaou, the Byzantinologist Christodoulos Hatzichristodoulou and the Municipality of Dimos, financial director of the Holy Archdiocese of Cyprus.

The arrangement for the return of the icon to Cyprus and its handover by the English owner took place in a ceremony that took place at the Academy of International Humanitarian Law and Human Rights in Geneva last February. The image was transferred to Cyprus recently.

The image was smuggled by a British Royal Air Force pilot who was serving in Cyprus in 1974 during the Turkish invasion.

The officer's son, who has since passed away, saw fit to return the image to its place of origin. The gentleman, who has chosen to remain anonymous, has no monetary or other claims, but set as the only conditions, firstly, the return of the image to its rightful owner, i.e. the Church of Cyprus, and secondly, that no one profit financially from her repatriation. As of today, the icon is in the custody of the Holy Archdiocese of Cyprus.

Professor Renold contacted the art historian Maria Pafiti, known for her involvement in many cases of repatriation of looted art from Cyprus, including the extraordinary 6th century mosaic of Saint Andrew from the church of Panagia Kanakaria. Maria Pafiti informed the Archbishop and coordinated the process for the return of the icon to Cyprus.

The anonymous donor stated in his statement that if this icon could speak, it would have a great story to tell about the its creation and for the joy it offered to many generations of believers.

"He would also tell of the sorrows of the world, conflict and displacement in another country for many years. This image of St. John remained hidden in a box for years and seemed to me to be lost. Reuniting her with people who truly appreciate what she represents is the best for all concerned, he said.

Professor Marc-André Renold said the process was smooth and transparent, thanks to the donor's clear desire to "do the right thing" and to the efficiency and expertise of Maria Pafiti, without whom this restoration would not have been possible.

"I also hope that this case will be the first of many, whether they are projects of high or moderate value, but in any case of great importance to the communities and the people with whom they are associated," he said.

< p> Mrs. Pafiti said that the ceremony marks the completion of the extraordinary collaboration between the anonymous donor, who took the initiative to return the icon to the Church of Cyprus, Professor Marc-André Renold and his team at the University of Geneva who chose to work with her and also saved the image as throughout the process, as well as Archbishop Chrysostom II, who advised them wisely. Its repatriation is a cause for celebration, but also for reflection on the thousands of works of art that are illegally trafficked. We, all citizens, can contribute to the prevention of this great, global, crime,», he said.

Source: www.sigmalive.com
Share
Facebook
Twitter
Pinterest
WhatsApp
Linkedin
Telegram
Previous article
Protest event in Eleftherias Square on Saturday by a Kurdish association
Next article
Equality asks the Speaker of the Parliament to discuss the pension bill at the next plenary session
- Advertisement -