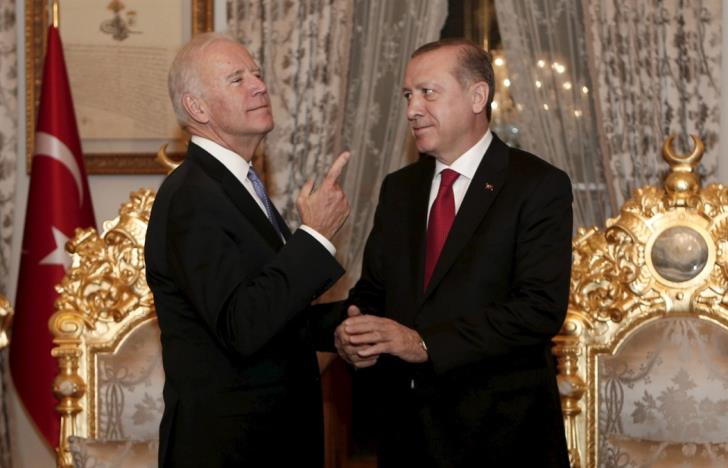 If Ms. Victoria Nuland “helped” us in anything, it is that she landed many of us who had a vague hope that President Joe Biden would rule, as far as Greece and Cyprus are concerned, based on his principles, as a senator. When he could not tolerate a fly on his sword on human rights issues. & Nbsp;

He was a political model for the peoples who fought for Freedom and Democracy. He was an advocate of the righteous who experienced injustice. He promised in the run-up to the elections that he would rule on the basis of respect for the rights of the oppressed on this planet. In an interview with the New York Times, he predisposed us about the way he would govern Turkey and its authoritarian leader, as he had publicly described Tayyip Erdogan. & Nbsp;

When he met with him last June in Brussels, the White House made sure that journalists were not present at the beginning of the meeting, as is ALWAYS the case, with all the Presidents. Even the enemy of the media, Donald Trump, respected this principle. A few hours after the meeting, we were informed through the Turks that there was no need to respect human rights. It was a shock to diplomats and analysts

The truth is that at their next meeting in Rome, National Security Adviser Jake Sullivan was quick to announce publicly and publicly that Mr Biden had raised the allegations. of the rights of Turkish citizens. & nbsp;

In the meantime, however, the American President had accepted the suggestions of his associates in the State Department and decided to follow a course of improvement of the American-Turkish relations. Of course, as always, the supposed improvement of relations is to the detriment of the interests of America's allies, such as Greece, Cyprus, and even Egypt, and Israel. & Nbsp;

In the face of this situation, several serious legislators have been found in the Congress, but the healthy forces of the Greek Diaspora, who bravely faced the four years of the inappropriate relationship between Donald Trump and Tayyip Erdogan and managed to impose force on the market. of the Russian S-400 system. Mr. Biden will face the embarrassing situation of having his party's lawmakers oppose him if he tries to lift those sanctions, which even the unreliable Trump has accepted. & Nbsp;

Ms. Nuland made tragic mistakes during her tour of Turkey, Greece and Cyprus. He was forced to retreat in the face of the strong reaction of the Greek-American community. I should note that both the Prime Minister of Greece, who will soon visit the White House, and the President of the Republic of Cyprus, expressed their dissatisfaction. So, he could not help but change gears. But, the statements are made and disappear. That is why the US position on both the Aegean and Cyprus must change, and I hope this will happen when Mr. Mitsotakis meets with the US President next month. & Nbsp;

The State Department bureaucrats did not take into account the reactions of the expatriates, and especially of the HALC activists. And it was at this point, I would say, that the “campaign” was set up to amuse the impressions. & Nbsp;

But even if he was seduced by the bureaucrats, President Biden has no excuse for how with whom he confronts Erdogan. & nbsp;

In that interview with the New York Times, when asked about the Turkish President, Biden described him as “authoritarian”, attacked him for his unacceptable behavior against the Kurds, and supported the Turkish opposition (to overthrow him). “in a democratic way). & nbsp;” What I think we need to do now is take a very different approach to it, making it clear that we support the leadership of the opposition, “he said in December 2019, a year before taking over presidency. & nbsp;

What changed; Nothing ισ The Islamist Erdogan was transformed from an authoritarian leader into a dictator. He continues to kill the Kurds, he continues to threaten Greece and Cyprus, he is the same turmoil in the Mediterranean, as he was then. Unfortunately, the American President is not what we knew… And it is sad that while Mr. Anastasiadis supported him in one of the most difficult moments of his life, which concerned his family issue, Mr. Biden forgot… & nbsp;

Of course, the new battle of the Greek Diaspora, which concerns the will of the State Department to cede the F-16 fighter jets to Turkey, will be victorious again. Here we are and we will say it again… In Congress, fortunately, there are several legislators who continue to save America την τιμή & nbsp;

HYSTEROGRAPH I: I can not but congratulate the American embassy in Nicosia, although many on the island will disagree. And they will disagree because a large portion of the population maintains a negative attitude towards what Americans are doing. My congratulations are on the reference – in the recent State Department report – to the corruption sweeping the island. As is well known – and I have written it many times – the political and economic system is corrupt and we have come to hear that if a foreigner decides to make an investment on the island, he must go through specific policy offices. & Nbsp;

The annual American report on Human Rights refers to the resignation of the former Speaker of Parliament, Dimitris Syllouris and AKEL MP, Christakis Tziovanis, who became resilient in the show of the Qatari television channel, al-Jazeera, when they did not know to journalists, not… “investors”, were irreparably exposed by selling “gold passports”. & nbsp;

The role of the journalists of this channel was a catalyst for revealing the scandal. Unfortunately, from the so-called “golden passports” investment program, the state was the loser. The winners were some politicians, several lawyers and accountants, but also real estate builders. I am glad that the American embassy made the report. Ρεπε And it's a help to those who continue to talk about the corruption of the political and economic system of the island. & Nbsp;

& nbsp; HYSTEROGRAPH II: 2023 presidential elections. And everything is being done to distort the crisis of the citizens, who according to the polls are looking for non-partisan solutions. Because the parties are tired, the corrupt politicians are tired, the inappropriate games of the political leaders are tired, which are basically minimal. They have no political height. The appearance of independent candidates, each successful in his field, proves the nakedness of the system. Let the citizens wish to choose the best. Let us wish the citizens to reject the corrupt. And to condemn them… Happy Resurrection in our Cyprus. & Nbsp;

Source: www.philenews.com
Share
Facebook
Twitter
Pinterest
WhatsApp
Linkedin
Telegram
Previous article
The US Ambassador's Easter message to Cyprus: “Light shines in the darkness, and the darkness has not defeated it”
Next article
Dramatic images in Chernihiv – Extra graves are being dug
- Advertisement -