“Anastasiadis and the presidential candidates” by Kyriakos Pieridis 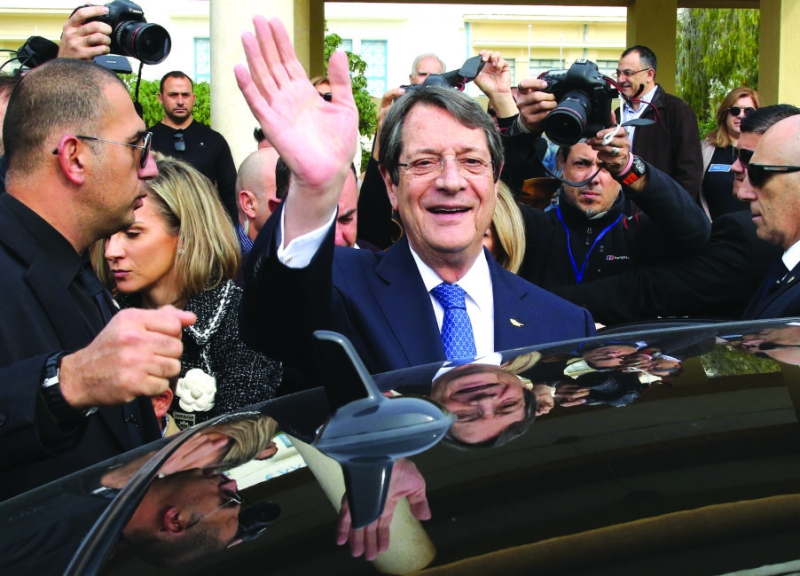 The stage for the presidential elections of February 2023 in Cyprus has been set, but its last act has not been played yet. With dense public interventions and uninterrupted activity, the Cypriot President N. Anastasiadis makes his presence felt as a combative politician, determined to remain in the forefront until the last day of his term. He comments on the presidential candidates and plans his moves in order, as he states, to give an account of his 10-year work.

Will he be content with an account and then leave? No one can make a safe assessment, but it is now certain that N. Anastasiadis is preparing for an intensive autumn with a series of trips in the form of an informal election campaign. Maybe he is considering the big upset, but he has not made a final decision. A third term, can it be considered a “bridge” for DISY, which is now divided?

But something more important has happened that makes the veteran politician weigh his options for a third term. He believes that he has no significant opponents, no one disputes him anymore, and therefore, no one will stop him, if this will be his final decision.

And yet, the main political forces have calmed down their candidates: as is well known, Averof Neophytou, president of the largest party (DISY) that has been ruling for almost 10 years, first opened his papers. He is a normal successor, but he has not yet succeeded in uniting the Cypriot Right party. Then came Nikos Christodoulidis, former Foreign Minister for 4 years of N. Anastasiadis and many others, previously, government representative. It is popular, but it splits DISY. DIKO and others are preparing to support him, claiming a share of power. Finally, AKEL decided last Sunday to choose Andreas Mavrogiannis, another collaborator of N. Anastasiadis, a negotiator in the Cyprus issue next to him for 9 years.

“Unfairly and in excess…”

Nikos Anastasiadis patiently waited for the circle of key candidates to be completed in order to know better the field in the coming months. Thus, the day after the election, Mavrogianni did not lose a single second. In an interview with the state RIK (show “From Day to Day” 6/6), he noted: “Candidates for the presidency are the president of the faction (meaning Averof Neophytou and DISY) and two of my closest associates for 9 whole years . This in itself is an answer to how unjustly and exaggeratedly the government and especially the President was accused & # 8230; »

With a single phrase “unjustly and excessively”, N. Anastasiadis appears as an “undisputed” leader and ready to answer if the “collaborators” lift his glove. So, after a long 10-year course full of extremely controversial options, he considers that he has no opponent, he has no contradiction. His interview was not commented on. Random?

In Anastasiadis' deeds, one can easily identify two extremely controversial issues: the Cyprus issue and the dichotomous course he took, as well as the “golden” passports and the extent of corruption. At the end of his first term, with a strong international commitment (UN – US, Obama administration – EU Juncker) he reached the most advanced point of resolution (Crans Montana 2017), but in the end he was found at least co-responsible for the tragic shipwreck. After his re-election, N. Anastasiadis had a serious problem to manage: where is the Cyprus issue going? He pursued a confused policy, played with “two states” and a supposedly “decentralized” Federation, until he got rid of the Turkish Cypriot leader M. Akinci. In fact, all that time he met with considerable internal opposition (AKEL, forces in favor of reunification, moderate “clerical” Right, Varosians) and the constant criticism of the international community (UN). Even the most conservative forces in the Cyprus issue, such as DIKO, kept their distance, warning of the danger of division. Someone had to be charged for such an ending! What's happening now?

“Anastasiadis knows that none of the presidential candidates is challenging him:” Negotiator A. Mavrogiannis confirmed Anastasiadis's narrative (meaning the version of events he presented and not the UN) about Crans Montana, “the Cypriot President told RIK. . He even asked for explanations, after attributing the criticism he received to “false information to AKEL from specific circles”. Nobody answered him from the opposition! Not even those who had first-hand knowledge of what was going on…

The Cypriot President has never been a likeable politician. But he twice managed to get elected President because the political conditions favored him so that he did not have significant opponents. Isn't that still the case today? It is not only the submission of his opponents to his own “narrative” about the Cyprus issue that makes him feel so satisfied. It is also the fact that N. Anastasiadis feels that he has checked the second serious cause of controversy in his face: the widespread corruption of the mass sale of “golden” passports – over 7 thousand in 8 years! In every favored country, N. Anastasiadis should be accused every day to answer:

Such questions no longer haunt him in a country that is experiencing a sharp rise in corruption rates and at the same time a sharp decline in media independence. And yet, N. Anastasiadis, with guided information to most of the media, considers that he has recovered, offsetting the “party” of corruption with an apology! Relaxed and comfortable, he told RIK “mea culpa in the sense of omissions” and referred to anonymous people responsible for “negligence of strict control” and “abuse by providers” & # 8230;

The decision to 3rd term

Therefore, N. Anastasiadis is comfortable handling the three candidates for the presidency: “They never disagreed on issues of corruption”, he said indicatively, with this report he turned in particular to N. Christodoulidis who was a member of the Council of Ministers who approved the “Golden” passports. As is well known, the former Foreign Minister runs with the support of Anastasiadis' close circle and is not at all self-sufficient, as he claims. By the end of June, Christodoulidis will formally receive the support of DIKO, formalizing the rift with DISY. A number of actors from the Right, with tentacles in the field of media who are interested in maintaining their privileges and hierarchy, have reason to worry about the consequences of this peculiar confrontation Averoff & # 8211; Christodoulidis. The same concerns the inability of the president of DISY to recover electorally and to unite his party.

N. Anastasiadis is preparing for the autumn! His report, as he states in the state RIK, includes, among others, reforms, green growth, renewable sources, the welfare state, the administration of justice, the fight against corruption and so on. Everything fits in with his innermost thoughts. It will certainly need to be measured in public opinion, as measured by Averoff's anxious attempt to rally, Christodoulidis' “deflation” and the apparent absence of opposition.

Source: politis.com.cy
Share
Facebook
Twitter
Pinterest
WhatsApp
Linkedin
Telegram
Previous article
Turkey: They were getting married, they were killed in a car accident
Next article
Tsavousoglou in the occupied territories – He will see Tatars and representatives of the Turkish Cypriot community
- Advertisement -