Antoniou to Ursula: The sanctions burden the peoples 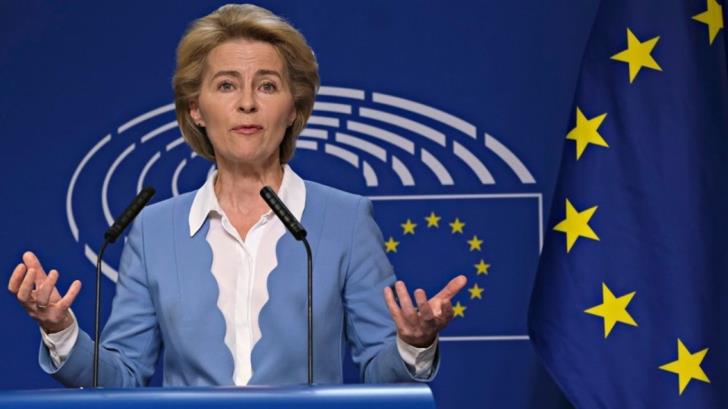 Open letter of the Director General of OEB Michalis Antoniou to the AU to the President of the European Commission Mrs. Ursula Von der Leyen:

“With modesty and unlimited respect, I address you with an open public letter in my capacity as a European citizen with a recorded, eternally fervent pro-European attitude, known in my small country. The invocation at the outset of my pro-European ideas and sentiments is a useful clarification for the text that follows, which diverges from the dominant narrative since war broke out on 24 February. So my thoughts are as follows:

A country that received the status of a candidate for membership in the European Union yesterday,  Ukraine, has been subjected to a brutal military attack by a neighboring country and global superpower.

The barbaric Russian attack is met with heroic defense by the armed forces and people of Ukraine. The cost in infrastructure and property destruction, but mainly in human losses of combatants and civilians, is unimaginable. This poor country will need many decades to get back on its feet. And its accession process and its accession to the EU, whenever it happens, will not free it quickly from poverty, and the longer the destruction of war is prolonged, the longer the period of healing the wounds in peacetime.

In the heroic defense of the Ukrainians, the governments of our countries came to the rescue with the pandemic support of their peoples. Help from the very first week and the EU, with the imposition of sanctions on Russia in a series of packages that each successive one adds to the previous ones without replacing or adjusting them.

However, the content of the European sanctions combined with the post-pandemic disruption of the supply chain, have caused incalculable damage and unprecedented problems to the economies and peoples of Europe.

At the same time, European citizens do not have a clear picture of the objectives of the sanctions so that it is possible to assess their effectiveness.  Is the goal to force Russia to sit on the sidelines of peace talks, or is the goal to economically destroy it so that it unilaterally ceases the invasion and withdraws to its internationally recognized border with Ukraine?

If it is the former, alongside and at the same time as sanctions, the EU would be expected to have a peace plan and promote its acceptance with the lure of sanctions relief. If it is the second, the EU leadership should transparently say how far we are from Russia's point of exhaustion. In other words, four months after the imposition of the first sanctions, it should be explained to the people of the member countries how effective the measures are, how much they cost Russia and how much to the people of the EU themselves. And they should be removed or readjusted those measures that threaten Europe with an economic disaster and a humanitarian crisis on the one hand, without having detectable effects on Russia on the other. In other words, a cost and benefit analysis must be done not of the support to Ukraine   (the cost of freedom and respect for borders has no units of measurement), but of the tools and methods by which this support is implemented.

The strength of the EU and its ability to support Ukraine derives solely from the strength of its economy. If we undermine the only source of our strength with ineffective and self-injurious measures, we will not only become useless to Ukraine, we will also be the EU leadership that, for the first time in its history, is handing over to its successors a Union less powerful and less prosperous than whatever she was when she picked her up.

We must agree that we are not at war.

If we were at war, all measures and sanctions would obviously not only be legitimate and necessary, but no critical approach to them would be permissible under martial law, so this note could not be published either.

But if I am wrong and we are in a new form of real war with Russia regarding an attack on a candidate country as an attack on our territory, someone from your College, the European Parliament or the Council should explain to us why not we are also at war with Turkey. Which with exactly the same unspeakable tricks, using exactly the same violence, committing the same war crimes, at the expense of a people overwhelmingly smaller in population and power, invaded a country that is a member of your family and illegally owns for half century a third of its territory. And to also explain to my 90-year-old father, why he impoverishes himself in defense of a country that is being invaded, when we have done nothing to increase even by one in a thousand the chances of him going before he dies to his home in Agios Ambrosios in Kyrenia, here and 48 years after Putin's dearest friends took it from him.

So since we will agree that we are not at war, it is time to take stock:  How much did the sanctions on Russia and the Russian countermeasures on Europe cost Putin and how much to the European economies. And with courage and realism to cancel everything that harms our peoples without contributing to the prevention of Russian barbarism and to replace them with other more appropriate measures.

Otherwise the impoverishment of the European peoples will be the strongest, perhaps and the fatal crack in the greatest post-war project of our fathers. A project of peace, development and prosperity in which the role of the dominant partner is played by the country that, within 30 years, has devastated the world twice. Because there simply cannot be peace and prosperity on our beautiful continent without Germany but, allow me to add, neither without Russia.

We have a historic task to rebuild the European security system, the which is impossible to exist without a peaceful and democratic Russia. So take peace initiatives, Madam President, step forward to design and promote an agreement to end the bloodshed and start negotiations to find a mutually acceptable arrangement between Ukraine and Russia. Before we all go bankrupt.