Asylum seeker: Back to their country those Africans who do not respect the KD (VIDEO) 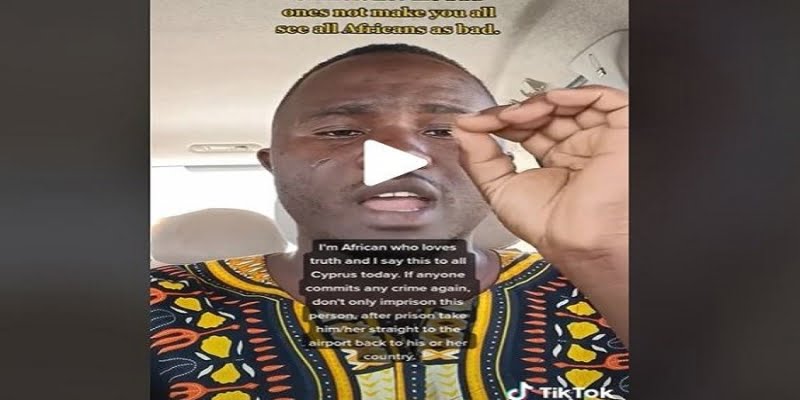 In the respect of the Republic of Cyprus mainly by African asylum seekers  causing trouble called via Tik Tok  an African who spoke very good Greek.

As he states in a three-minute video, he is originally from Cameroon and has been in Cyprus since September 2018.

"The reason I am making this video today is because I am not happy with things some Africans are doing in Cyprus. First I want to thank the Republic of Cyprus for receiving us from many countries. I know that it is not easy for a small country like Cyprus to accept 50 to about 70 thousand refugees from many countries. For God's sake.

Normally it is very difficult for the Government, I know and understand. You Cypriots want only one thing from us refugees in Cyprus, and that is respect in your country. I think the best way to say thank you to the Republic of Cyprus is to respect your laws, rules and regulations, but what we see in Cyprus is different. If an African doesn't steal anymore he will fight, if he doesn't fight he will burn down a house, whoever doesn't burn down a house will rent a house by himself and then bring 5 to 10 more people into the house.  This is a big problem because then they will destroy everything inside the house, living room, kitchen, ceiling, balconies, bathroom and rooms.  He doesn't pay electricity, water and rent and then he will leave.  All these things for me are not good.

Today I tell all Cypriots I am from Africa and I like the truth. Any African who does something bad in Cyprus, don't just take him to prison in Nicosia. After prison take him to the airport in Larnaca and send him back to his country».

Source: www.sigmalive.com
Share
Facebook
Twitter
Pinterest
WhatsApp
Linkedin
Telegram
Previous article
Over 200 million the… tariff of the pandemic-Vaccines the most expenses
Next article
Hopeful messages for the 11-year-old: “Wake up, he understands his family”
- Advertisement -