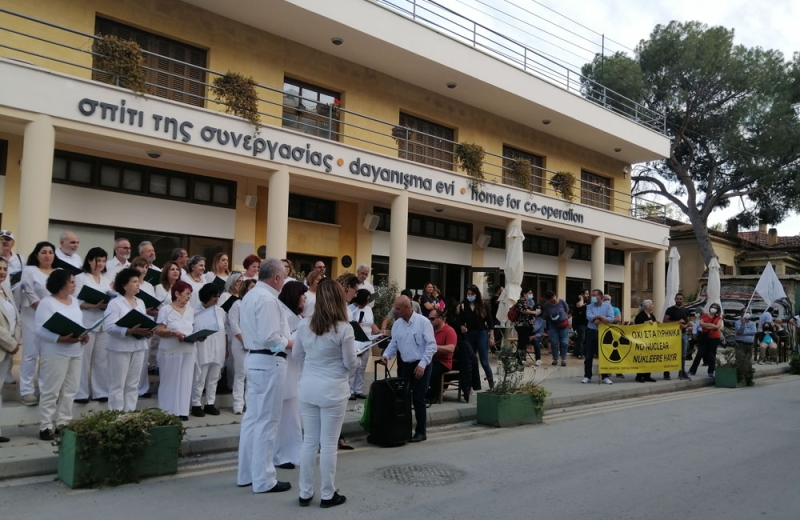 A human chain in memory of the victims of the Chernobyl accident, which took place in April 36 years ago, was created on Wednesday afternoon by participants in a Bicommunal Action against nuclear green line, outside the Ledra Palace Hotel in Nicosia, to declare They oppose the opening of the nuclear power plant in Akkuyu, Turkey.

nuclear power plant, is located just 90 kilometers off the coast of Kyrenia and that the plant threatens the safety of the wider area.

The Joint Declaration was read in Greek and Turkish, as participants in the event formed a human chain in memory of the Chernobyl victims, holding lanterns.

Members of organizations and parties held banners saying “No to Nuclear” and “Nuclear Free Mediterranean”.

The Bicommunal Choir for Peace – Lena Melanidou, sang a song about the victims of Hiroshima, which they composed and added lyrics about Cyprus, such as “missing, refugees, sorry”, but also Greek Cypriot members of the choir to sing “Turkish Cypriot brothers sorry” in Turkish, and Turkish Cypriots saying the same to Greek Cypriots in Greek.

At the end of the event, participants observed a minute of silence for the Chernobyl victims but also for all those who have suffered because of nuclear disasters.

The Joint Declaration states, among other things, that the nuclear power plants “do not only threaten the environment but mainly the health and safety of the inhabitants of the surrounding areas” since a possible leak poses a huge risk to both the plant workers and the residents./p>

Referring to the consequences of the catastrophic earthquake in Fukushima in 2011 and the leak at the nuclear power plant there and the accident at Chernobyl, which occurred, as reported, “like today 36 years ago”, the announcement notes that nuclear energy is not even renewable nor clean while the problems it can cause outweigh the benefits. The cost of nuclear waste management, he added, is very high and this refutes the theories that nuclear energy is a cheap source of energy.

“There are so many other types of energy that can to be used by humanity today when the use of nuclear energy can be described as unnecessary “, it is reported.

It is emphasized that the Chernobyl accident is still plaguing people and the environment throughout the Black Sea basin.

The threat of nuclear power is greater than ever.

The Joint Declaration is signed among others, AKEL, the Movement of Ecologists & # 8211; Citizens 'Cooperation, the Turkish Cypriot parties New Cyprus, the Community Democracy Party and the Road to Independence Party, the PEO, the Turkish Cypriot teachers' unions, KTOS and KTOEOS, political, artistic, and ecological movements and local groups.

Source: politis.com.cy
Share
Facebook
Twitter
Pinterest
WhatsApp
Linkedin
Telegram
Previous article
The process of selling the main residence was deemed illegal – An objection was pending for non-inclusion in “Estia”
Next article
OELMEK: Possibility of taking measures for the letters of the Ministry of Education
- Advertisement -