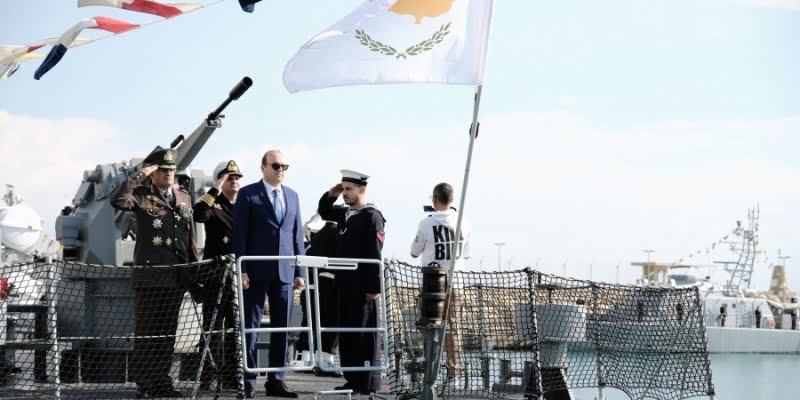 The continuous strengthening of the Navy through a balanced development process of the branches of the National Guard is our vision, Defense Minister Charalambos Petridis said today, adding that the navy participates in a large number of multinational exercises and is proving worthy of our expectations.

In his greeting at the celebration on the occasion of the feast of Agios Nikolaos, patron of the Navy, held at the “Evangelos Florakis” Naval Base. in Marie, the Minister stated that "the Navy, but also the National Guard in general, has human resources of a high level, which when required proves its ability to cope with the challenges that appear, with high morale, loyalty to the mission and above all love to the homeland».

He added that "our personnel, within the framework of the defense partnerships we have entered into as the Ministry of Defense with friendly countries to maintain and strengthen security and cooperation in the eastern Mediterranean, participate in a large number of multinational exercises and prove worthy of our expectations. Within 2022, naval cooperation exercises have been carried out with the Navy of France, the United States of America and the Navy of Italy.

He also noted that "in the context of strengthening interoperability between the Special Operations Teams of the US and Cyprus, through the exchange of tactics, techniques and procedures used, with the aim of improving the readiness of naval forces in the region, joint training between Teams was carried out, among other things Special Operations (OEE) of the Undersea Disaster Unit (MYK) of the Navy Command and the US Naval Special Warfare Task Unit Europe”.

The Minister of Defense also stated that "the presence of means and personnel of friendly countries in the area , as is the case these days with the French aircraft carrier Charles de Gaulle, interoperability and frequent co-training with advanced militaries only have a positive impact, since they lend prestige to the Republic of Cyprus and provide expertise to National Guard officers.

At the same time, he continued, "they send the message that our defense partnerships remain strong, with the aim of strengthening security and ensuring free navigation in the wider  area of ​​the Eastern Mediterranean, which we seek to turn into an area of ​​Naval interest for the European Union. We also discussed this in the recent quadripartite meeting I had with the Ministers of Defense of Greece, France and Italy, on the sidelines of the work of the Foreign Affairs Council of the European Union.

Referring to the issue of humanitarian missions and search and rescue operations, Charalambos Petridis said that "the Navy in cooperation with the Search and Rescue Coordination Center participated in the "Argonautis 2022" exercises. and “Nemesis 2022”, certifying and confirming the role played by the Republic of Cyprus in the region as a pillar of security, stability and cooperation. In the various calls for assistance the navy is ready to act where required within the area of ​​responsibility of the Republic of Cyprus.

He also said that "as part of the modernization and strengthening of our Navy and coastal defenses, our anti-ship capabilities have been enhanced, the Coastal Surveillance System has been expanded with additional cameras, and new search and rescue vessels and equipment for the Submarine Disaster Unit have been purchased. We are also in the final stage of planning to upgrade the Naval Base, so that it will be able to serve warships of foreign countries as well. from a balanced development process of the branches of the National Guard».

At the same time, he congratulated the Navy Commander and all the staff for the beneficial work they are doing and invited them to continue "with the same zeal, selflessness, determination and confidence, under the auspices of Agios Nikolaos".

The ceremony to celebrate the patron of the Navy, which began with a eulogy by Metropolitan Trimythoundos Varnavas, was attended by, among others, the Chief of the National Guard Dimokritos Zervakis, political, state and military officials, while tribute was paid to the personnel who gave their lives for the defense of the homeland.

The Minister of Defense accompanied by the Chief of the Greek Defense Forces and the Commander of the Navy Captain Konstantinos Gennadiou boarded the open sea warship "Ioannidis" where a wreath was thrown into the sea.

The ceremony ended with a guided tour of the invited weapons systems exhibition.

Source: www.sigmalive.com
Share
Facebook
Twitter
Pinterest
WhatsApp
Linkedin
Telegram
Previous article
Fotiou: The fate of the more than 750 missing is still unclear
Next article
Indignation of trade unionists from the Ministry. Energy for the problems of the EAC
- Advertisement -