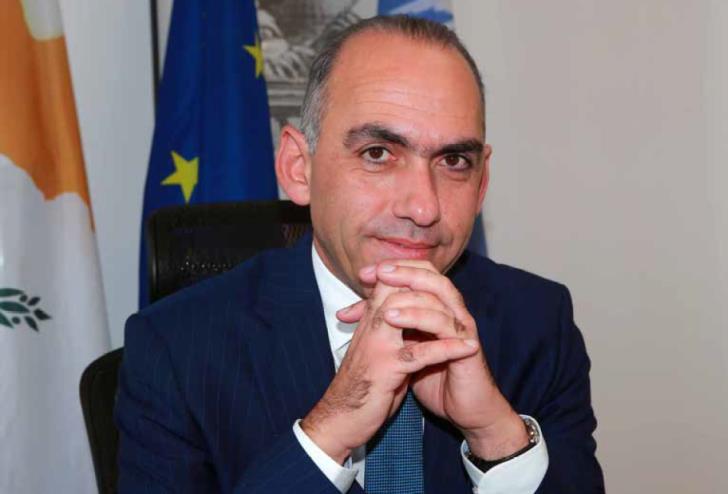 He opens his papers and takes a stand against the developments but also how the political scene is formed. The vice president of DISY, Haris Georgiadis, talks about the pre-election of the ruling party, the candidacy of Averof Neophytou, pointing out that there is an increase.

He considers the candidacy of Nikos Christodoulidis a given and notes that the former minister did not just support the Anastasiadis Government, like Averof Neophytou, but was a member of it and wonders how some who say they want change will bring it with a member of the Anastasiadis Government and the Democratic Alarm. He talks about the possible candidacy of Andreas Mavrogiannis, as well as the failure of the two major opposition parties to cooperate. Responds to comments and criticism against the ruling party on various current affairs. He speaks of malicious gossip emanating from specific people, indicating that in DISY they did not have, nor do they have, nor do they need vigilance, as in AKEL.

– A month and a half after the formalization of the candidacy of Averof Neophytou for the Presidency of the Republic by the Supreme Council of DISY. What do you get from the world? Are you concerned about the fact that the party candidate's percentages are low? & Nbsp;

Steady progress has been made in recent weeks. The course for the candidacy of Averof Neophytou is on the rise. He was elected through open and democratic procedures, he has a specific and structured proposal and he has the support of the great faction of the Democratic Alarm, the faction that ensures the stability, security and progress of our country in these difficult times. Of course, we do not underestimate the difficulties of this electoral effort, we certainly have a road ahead of us, but there is optimism. As for the polls, I do not think I need to remind you how many times we have refuted them with the results we achieved at the ballot box. Unless some people think that a race will be judged before it even starts. & Nbsp;

– The high percentages recorded by the candidacy of Nikos Christodoulidis, how do you comment on them?

< p>– I do not question the popularity of Nikos Christodoulidis. Nor do I dispute that he is indeed a candidate and that he has been running for office for many months, regardless of whether he has not officially announced and is not publicly exposed. However, the fact that in the polls his candidacy is the only one that appears opposite to that of the Democratic Alarm, I consider that gives him an additional poll lead. I think that we will have a clearer picture in the coming months when the pre-election scene is fully formed and when the pre-election effort has run. & Nbsp;

– So you think that the Christodoulidis candidacy is against the Democratic Alarm? Isn't he the same member and executive of your party?

– Of course he is a member and executive of ours, but he chose not to participate in the procedures for selecting a candidate of the Democratic Alarm, on the contrary he seems to be talking to the opposition, so he clearly chose to stand against his party. His right to do as he sees fit, but I am personally saddened by this development, especially when Nikos had all the opportunities to address and claim through the faction that promoted us all. The faction that we should all support in order to maintain its decisive role, for the good of our place. & Nbsp;

– How do you evaluate the scene especially after the wreck of the DIKO-AKEL cooperation?

– What impresses me is the ease with which some people move left and right. After all, they have stated that their main purpose is to find any sacrifice in the government or in the co-government. Obviously, the political direction, the positions, the ideas and the program take second place. & Nbsp;

– DIKO seems to be closing the door on you, at least regarding the first round. It is open to discussion about Nikos Christodoulidis. How do you comment on that?

– He is also AKEL's moves? How do you judge the possibility of supporting the former negotiator Andreas Mavrogiannis?

– Andreas Mavrogiannis is an experienced diplomat, who was also a key collaborator of President Anastasiadis. I do not have a particular comment.

– Would a candidacy of Irini Charalambidou worry you?

– Irini Charalambidou is a very dynamic and capable MP of the opposition, she would be a predictable opponent but, from what I see and hear, there is no chance that she will be supported by her party. & Nbsp;

– DISY, however, seems to have been on the sidelines of discussions for any collaborations. Doesn't that bother you?

-But it seems that no one will be able to have remarkable first round collaborations. I understand and respect that some parties have not yet made their decisions, but as things stand at the moment, in addition to Averof Neophytos as the candidate supported by the Democratic Alarm, there will probably be another one who will be supported by AKEL and at least one or two candidates who will be supported by the parties of the so-called middle ground. contacts with the former Foreign Minister?

– Something like vigilance? We neither had, nor have, nor do we need it. Regarding the insecurities, the act of Averof Neophytos to open the process of selecting a candidate to all members of the Democratic Alarm, ie to 51,000 of our fellow citizens, I consider to be confidence that shows and not insecurities. And to be clear, I think we know exactly who is spreading such rumors in the context of not at all pure political behavior.

Turkey & nbsp; behavior & nbsp; does not differ from that of Russia

– I would not talk about annoyance. But we would certainly like some reference from the President of Ukraine to the ongoing occupation of Cyprus. It is perfectly understandable that Zelensky is leading a country that is currently being brutally attacked and his focus is on Ukraine's struggle for survival, but for our part we must try to show that Turkey's behavior is not fundamentally different from that of of Putin's Russia. They show the same aggressive and revisionist behavior and are characterized by the same authoritarianism, both internally and externally.

Opportunities for exploitation of the Eastern Mediterranean

Half-hearted people have no place in the face of the unacceptable invasion of an independent state in the heart of Europe. Neither equal distances, nor the discreet effort to justify the unjustified. Putin's attack on Ukraine is a clash of democracy with authoritarianism. So, of course, we have to take a strong and unequivocal position and I have done that from the first moment.

But also on the issue of sending weapons to Ukraine by those states that have the ability to do so, our position is clear. It is this aid in weapons and ammunition sent, among others, by our partners in the EU, but also by Greece, that allows the people of Ukraine to resist. Some respond that sending weapons prolongs the war. This is an unacceptable equation of the struggle of the defending people of Ukraine with the actions of the invader. We want an immediate ceasefire, peace, but not with the surrender and dissolution of Ukraine but with the withdrawal of the Russian army from the territory of Ukraine.

– What is your assessment of the consequences? in the economy since the Ukrainian crisis? Do we have the mechanisms as a state to meet this new challenge? A pandemic ακόμα

is still ongoing- There will be consequences, with more serious disruption to international trade which in turn creates strong inflationary pressures. Which, as we know, was already intense due to the pandemic. In other words, one challenge follows another and as an open economy we will certainly be affected. On the other hand, what makes me a little more optimistic is the fact that the economy of Cyprus today is much stronger than it was 10 years ago. Imagine facing such external pressures in 2012 or 2013. When the economy was in deep recession, unemployment soared, the banking system collapsed and the country was driven to memoranda.

Today, I repeat, we have an economy with growth potential, essentially full-time, with strong banks, sound public finances and easy access to international markets. In other words, we have the background that will allow us to deal with the negative impact with relative adequacy and with the expectation that there will soon be an end to the invasion and peace. But, I say it again, difficulties are a given and that is another reason why we need strong leadership and the right political reactions. & Nbsp;

– The crisis in Ukraine is changing the balance . How do you see the global political scene taking shape?

– Things have gotten difficult and I'm worried. Both the world economy and the international political scene have entered a period of tension, uncertainty and insecurity. Things that for decades we took for granted, ceased to be valid. The Russian invasion and all the justification on the part of the Russian government is from other times. The relative stability that has characterized the last decades has given way to a conflict between the world's democracies and authoritarianism. It is therefore imperative for the European Union to take a sound strategic view of the new situation and to realize that the policy of business as usual with authoritarian and revisionist states cannot continue. The European Union must properly assess the importance of defense and security, as well as its resolute stance against such regimes. & Nbsp;

– But Turkey seems to be finding a way to upgrade its geostrategic role in the area. What do you think will be the impact for us?

The displacement of Turkey is a given and in the short term it is clear that Turkey appears to be useful to all. It has not imposed the slightest sanctions on Russia, but at the same time it is sending drones to Ukraine. It mediates between the two with the blessings of both the US and the EU. But in the long run I'm not sure if this stance of neutral neutrality will be in Turkey's favor. Because, once again, the strategic dimension between the approaches and the interests of Turkey and the West is emerging. I do not think we have seen a clear trend yet. & Nbsp;

– How did you see Mrs Newland's visit and her reports on energy cooperation?

-The energy dependence of important EU member states on Russian gas was a very serious strategic failure on their part. Now that this serious mistake has been realized, opportunities may arise for the Eastern Mediterranean. We must approach these opportunities methodically, in close cooperation with Greece, without ever allowing this important perspective to become a tool for domestic political consumption. In other words, to understand that one is international relations and another is public relations. & Nbsp;

Source: www.philenews.com
Share
Facebook
Twitter
Pinterest
WhatsApp
Linkedin
Telegram
Previous article
Patra: Roula Pispirigou is called for deposition – Why will they insist on the death of Iris and not Malena
Next article
Stopping a vehicle in Pyla and locating 80 crackers in the possession of a 19-year-old
- Advertisement -