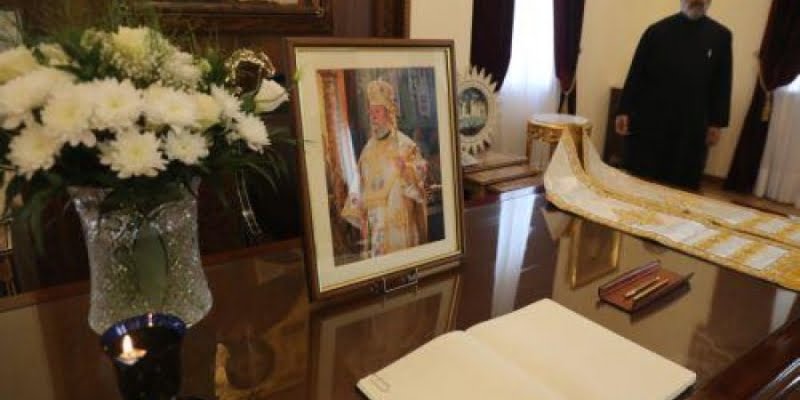 The President and the Prime Minister of Greece expressed their condolences for the passing of Archbishop Chrysostomos II in letters, while the country's Ambassador to Cyprus, Ioannis Papameletiou, signed the book of condolences on Wednesday, stating that the strength, steadfastness and devotion of the deceased in national duty "will be a source of inspiration in perpetuity".

A press release of the Embassy of Greece in Cyprus states that they expressed their condolences for the death of the Archbishop of Nea Justiniana and all of Cyprus Chrysostomos II in their letters to the Custodian of the Archbishop's Throne, Metropolitan of Paphos Georgios, "the A.E. President of the Hellenic Republic Mrs. Katerina Sakellaropoulou, the Prime Minister Mr. Kyriakos Mitsotakis, the Minister of Foreign Affairs Mr. Nikolaos – Georgios S. Dendias, the Deputy Minister of Foreign Affairs Mr. Miltiadis Varvitsiotis, the Deputy Minister of Foreign Affairs Mr. Andreas Katsaniotis, the General Secretary of Hellenism Abroad & of Public Diplomacy, Mr. Ioannis Chrysoulakis and the General Secretary of Religious Affairs of the Ministry of Education and Religion, Mr. Giorgos Kalantzis.

The Minister of Education and Religious Affairs, Niki Kerameos, also expressed her condolences for the death of the Archbishop with her relevant post on the Ministry's website, it is reported. Mrs. Kerameos stated that “the venerable Archbishop of Cyprus Chrysostomos II worked with self-sacrifice for the good of the Church of Cyprus, the homeland and Hellenism.” May he rest in peace,'' it added.

It is also reported that the Ambassador of Greece to Cyprus, Ioannis Papameletiou signed the condolence book today at the Holy Archdiocese of Cyprus stating the following: "From the bottom of my heart I express my deepest condolences for the excommunication of the blessed Archbishop of Nea Justiniana and all Cyprus, Mr. Chrysostomos II. His contribution of historical dimensions to the Church of Cyprus and the Christ-named flock highlighted him as a great figure of Orthodoxy and Cypriot Hellenism. His fortitude, steadfastness and devotion to national duty will be a source of inspiration for eternity. I wish the Most High to rest his soul».