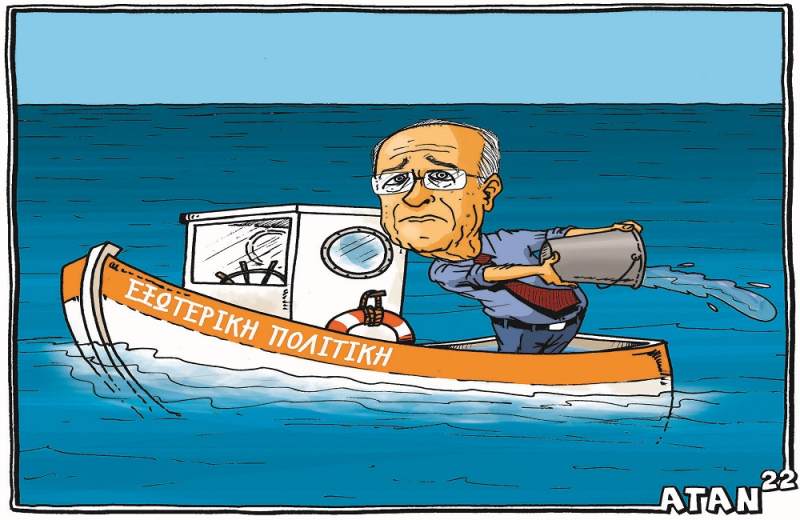 The change of guard at the Ministry of Foreign Affairs offers a first-class opportunity to return elementary seriousness to our country's foreign policy.

Ioannis Kasoulidis must restore Cypriot diplomacy to the rails of rationalism and realism, overturning the image of the last four years based on which the Republic of Cyprus is treated as a monopolistic state, obsessed, under the geostrategic control of Turkey, even satellite of the Kremlin.

The foreign policy of Cyprus in the last 4 years has been limited to three main pillars. All three are based not on Cyprus being a European state but on a troubled state embroiled in a dead-end confrontation with Turkey. This is a policy that has failed to expose Turkey internationally and at the same time has not had much benefit for our country. What are our obsessions?

Everyone is an enemy

First, our foreign policy is based on the traditional defense perception of the Cypriot Ministry of Foreign Affairs, that our statehood is in danger, that we are all being persecuted and that we are under fire from everywhere, so we must be constantly vigilant to face the enemy. Everyone, Americans, British, Europeans, hate us and support the eternal enemy that is Turkey. The only friendly countries to Cyprus are Greece, but also Russia. With Greece and under Tsipras, but also Mitsotakis, there are serious disagreements, but for political reasons they are degraded. With Russia, Cyprus is absolute, since this country moves on the basis of principles! And what are these principles? To equip Turkey with S-400 missiles, to build nuclear power plants, to help it invade Syria, to sell it natural gas and to send it millions of tourists every year. What is Russia useful for according to our narrow-minded perception? It is there mainly to block any initiative in the Security Council for a solution to the Cyprus problem for Mr. Papadopoulos, Mr. Sizopoulos, Mr. Lillikas, Mr. Theocharous, Mr. Syllouris and others to celebrate in Nicosia. In recent years, President Anastasiadis has also entered the club, starting to make ideological storms, as revealed by our negotiator Andreas Mavrogiannis, abandoning the solution of the Federation and favoring the solution of two states, in order to end up in the policy that Russia wants. That is, in maintaining the status quo.

This line, of course, was not adopted only by Nikos Christodoulidis. This is a strategy that Cyprus has been following since 1964 when the Turkish Cypriots left the government and Turkey tried to delegitimize the statehood of Cyprus. The paradox is that this line was never updated, even when we reached the fifth of the solution. This is a strategy for strategy. No one thinks that if solved e.g. the Cyprus issue we should see the possibility of a peaceful coexistence with the T / C, even the establishment of friendly relations with Turkey. When you hear a diplomat at the Foreign Ministry argue, you understand that the Cyprus issue must be resolved as the Greek Cypriots want, the Turkish Cypriots must capitulate and Turkey must leave Cyprus, if it is not possible to disappear from the map.

A second pillar of foreign policy was built after 2004, “after we played the Europeans and joined the EU,” as Archbishop Chrysostom said a few years ago. This policy is based on a sterile instrumentalization of the European Union, which we see not as a society of partners with whom we coexist and coexist, but as a weapon that will be used to blaze Turkey. The naive, to the obsessive, approach of the former Foreign Minister in this direction caused a great deal of ridicule from the partners, who continued and continue to treat us as a picturesque country and himself as a desk officer. A country that is not interested in solving its own problems, such as e.g. the Cyprus issue, but to create problems in Turkey, either in the form of exclusion from the EU processes, or by taking sanctions that will cause damage to its economy. The EU has made it clear that it does not want Turkey to come under Russian control and called on the Republic of Cyprus to offer diplomatic assistance, but mainly the acquis communautaire, as levers of pressure for a solution to the Cyprus problem. He took part in all the conferences on the Cyprus issue at the highest level (Juger-Mogherini-Timmermans), imposed the presence of European technocrats in the negotiations on the Cyprus issue, adopted the position that a European state can not have guarantees from a third country. The former Foreign Minister chose, adopting Anastasiadis' policy, to claim only sanctions and measures and, above all, he chose to be ridiculed.

Thirdly, Cyprus was involved in Tripartite Conferences in the region not to synthesize things and situations, but to create, in its naive approach, fronts against Turkey. The Tripartites were initially proposed through Biden by the Americans to become a Quartet with the inclusion of Turkey to create an energy arc in the East. Mediterranean, with Cyprus in the spotlight. They have now become a tool that serves Russia's interests. With Messrs. Anastasiadis and Christodoulidis falling into political contradictions, since the content of the Tripartite is different with Israel and different with Egypt. The only background that exists is the exploitation of the limited quantities of natural gas in the area so far. Israel initially reached a Tripartite with Cyprus to investigate the possibility of a joint pipeline to Turkey. Netanyahu then for domestic policy reasons, due to the crisis in relations with Turkey, nailed the East Med, a pipeline that is still part of the political manual of every good populist politician, since due to cost and lack of sufficient gas reserves can not to be constructed. Egypt does not want the pipeline. It wants to buy the natural gas of Cyprus and Israel, lead it with small pipelines to its terminals and become the largest gas field in the Eastern Mediterranean. Somehow, until today, the leader of Egypt, Sisi, works for Mr. Anastasiadis and Mr. Christodoulidis, but he does not buy it, because he wants it at a cost. By law, Cyprus was lost on the agendas of these two countries, even dragging Greece, which is paying the price for the further aggravation of its relations with Turkey. What is left in Cyprus to say as a result of the Tripartite? He allowed Mr. Christodoulidis in recent years to claim “that we shielded our EEZ”, sending the message – at a time when Turkey was drilling under Limassol and settling Varosi – that we have reached a strong alliance to prevent Turkish expansion. With the Egyptian and Israeli diplomats, when we ask them when their frigates will come to our EEZ to shield it, they laugh out loud. Who are the winners and who are the losers from this naive policy Christodoulidis, who now wants to become President? Egypt is the first to hope to be turned into a pill, and especially Russia, which has blocked any scenario of selling gas to Turkey from Levantine, selling its own gas and driving it away from the West.

In short, what Mr. Ioannis Kasoulidis is called to do is to restructure any foreign policy we have and to give realistic battles with Turkey with the help of our partners in order to reach a solution to the Cyprus problem. In conclusion, knowing that through the solution Cyprus moves away from the control of Russia and the geostrategic embrace of Turkey, functionally integrates the Turkish Cypriots in the EU and consequently upgrades politically, becomes a European regional economic center and ensures something that we lack here. and decades: Peace and prosperity in our region for all Cypriots.