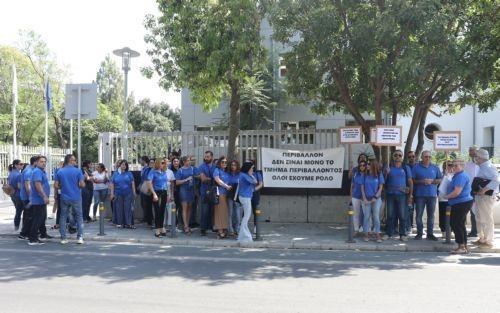 Requesting staffing to be able to effectively implement the laws for the Environment, the employees of the Department of Environment went on a two-hour work stoppage on Friday and gathered outside the House of Representatives.

Neoklis Antoniou, Environment Officer A 'and representative of the PASYDY Department of Environment, told KYPE that studies conducted by organizations such as the World Bank and the European Commission indicate that in order for the department to function effectively, it should have at least 180 organic positions. Instead, “the 2022 budget provides for 89 organic posts, of which 40 are currently vacant.” With 49 organic positions, seconded from other services and temporary staff, the Department of Environment is currently staffed by 70 people, noted Mr. Antoniou.

Regarding the & nbsp; inspections that must be done in industries, farms, waste transporters, Mr. Antoniou said that “there are 8 inspectors, who are in charge of controlling more than 2,000 industries, more than 1,000 waste transporters, more than 800 large livestock units “. In addition, “annually the Department of Environment receives about 400 complaints, which these 8 people must respond to, and there are several thousand waste producers, which according to the legislation should be controlled,” he noted.

Regarding the fire that broke out in a tire management company in Marie, Mr. Neokleous noted that the fire was caused by a failure of a mechanical shredder. “In this area there is a fire extinguishing system, which as a result does not seem to have fully responded, as it failed in the early stages to reduce the fire. “Does the Department of the Environment have the know-how or the responsibility to control firefighting systems as well?” He wondered.

Speaking to reporters, he added that a spokesman for the Audit Office said they had been warned of fire hazards. As he said, in the report of the Auditor General of 2016 for the Department of Environment, there is a reference to fire hazards. The specific reports, however, he said, “concern another facility, in a different place, a few kilometers away. That is why we do not agree with the specific positions “, he concluded.

The Speaker of Parliament, Annita Dimitriou, went out of the building to meet the protesters and received the note prepared by the employees. Talking to them, he said that he fully understands the reasons for the protest, however he pointed out that in order to increase the staff, it must be included in the budget and this concerns executive responsibility. The employees argued that the Parliament that passes the relevant laws, should know the situation of the Department of Environment that is called to implement the laws.

The President of the Ecologists 'Movement, Charalambos Theopemptou, expressed his support for the workers' event. “I must say that the demonstration made today by the staff of the Department of the Environment is completely justified,” he said, recalling that more than 50% of the EU directives that have been adopted concern the environment.

“We have well-trained staff, but we have a terrible problem with inspections. “We need to significantly increase the number of staff in the Department of Environment, to have more regular inspections and it needs to increase, because the constant revisions of the directives and the legislative work that needs to be done is great”, he said, adding that the workload of the department is expected to increase further with the implementation of waste legislation in the new municipalities. “I have to say well done to the children who came out at last to say all these problems, so that the Government understands that it is not possible to be stingy in such a field,” he concluded.

The MP of the Ecologists' Movement, Stavros Papadouris, said that “we express our full support and backing to the just request for understaffing, which is observed in the Department of Environment. It is something that we raise repeatedly and personally, every year we have the discussion about the budget of the competent Ministry I raise this issue.

As he said, in the province of Larnaca and free Famagusta the Department of Environment employs 4 people and he wondered how they can implement their responsibilities.

AKEL MP, Nikos Kettiros, expressing his support, said that “as a State we have requirements from the people who inspect the specific units that need inspection, as required the relevant legislation and as mentioned in the Auditor General's report. However, it is generally accepted from the data provided by the Environmental Service staff that the staff is less than half what it should have been. Therefore, there is no case for them to meet the requirements that they must meet “. He added that he should include the staffing of the department in the next budget, “but they should also address not only the Parliament but also the Ministry of Finance”.