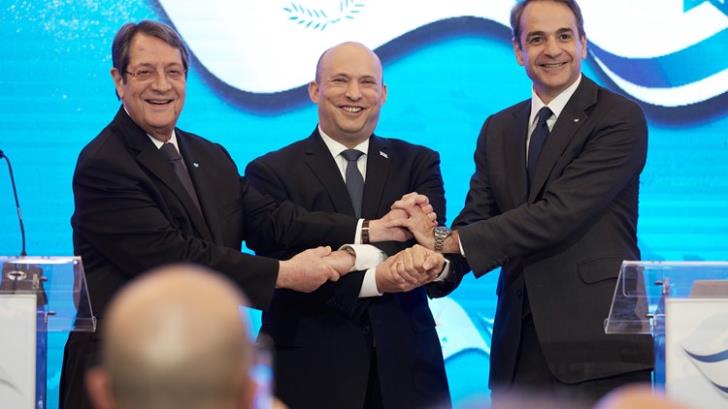 About a month ago in Jerusalem, the leaders of Israel, Cyprus and Greece were synchronizing their clocks, the time for the future of the Eastern Mediterranean pipeline was beginning to count down. What was agreed between Bennett, Anastasiadis and Mitsotakis was not only the realization of a techno-economic study for the pipeline but in essence was the preparation of a commonly accepted supporting document for the non-realization of the project.

The difficulties of carrying out the project were well known from the beginning. However, the Netanyahu governments in Israel, Anastasiadis in Cyprus and Tsipras in Greece were supportive of the project. The United States, which has played a significant role in the region, has not been negative despite the concerns it has had since. The fact that the project was coming under the EU umbrella for funding was a “cushion” for the three countries as it would not bear any serious costs.

The data differed when Mitsotakis took over in Athens and Bennett in Jerusalem. The construction of the pipeline was for Athens another source of tension rather than a public utility project. Warm support from Israel began to wane as other alternatives came to the fore.

Thus, in the last tripartite meeting in Jerusalem, Benet, Anastasiadis and Mitsotakis agreed that “by 2022, the studies of technical feasibility and economic viability should be completed”. Aim by the end of 2022 to make the final decisions. The three leaders will meet, meanwhile, in the middle of the year, in Cyprus, so it is not ruled out that he will clarify the issue there.

They pulled the carpet

The Americans, relying on the financial cost of the project, first came up with an informal document and then officially with Amos Hochstein's statements to pull the carpet, making in every direction that the EastMed pipeline should remain a dream that will never come true. The approach of the Americans does not only affect the three countries but will certainly affect the EU as well, and it is not ruled out that similar messages will be sent from Brussels soon.

The policy of the Mitsotakis government regarding Greek-American relations was a strong paper for Washington. He built on the initial concerns of Athens, which certainly does not want to come to terms with the United States in a period of absolute cooperation between the two countries, especially for a project that will probably not take place.

At the time the American non-paper on the pipeline was sent to Nicosia, the priorities of the rulers who were running for the party and presidential elections next year were different. Nikos Anastasiadis, responding to the interview he gave to “Phileleftheros”, made it clear that Nicosia does not put all the eggs in EastMed's basket. Something he repeated yesterday (a week later) with his statements to Kathimerini.

If this plan is not feasible, then we are ready with our partners to consider other sub-options. In any case, the study of other options I do not consider to affect the interests of any of us, of course the solution that will be chosen to respect international law is enough, something that for all involved is out of the question, said the PD, adding that the European Union itself has adopted this project as a project of “common interest” and has invested in studies concerning it. At the same time, President Anastasiadis recalls that the EU has only recently recognized gas as a transitional fuel to the green energy transition.

President Anastasiadis stressed that cooperation with Greece and Israel extends to dozens of other areas – economy, investment, tourism, green development, defense, security, etc. – and that this pipeline is only one part of this cooperation . “The tripartite meetings were not held to build EastMed. That is why we have similar meetings with all the countries in the region and the Arabian Gulf. “

They do not see it negatively

In Nicosia, government circles commenting on the developments yesterday recorded the position of the Cypriot government as follows:

1. There is full US support for proceedings within the framework of International Law, while reference is made to the work of EXHON and the relevant statements of Judith Garber (US Ambassador) on Friday on the platform.

2. Absolute respect for the rights of the KD and all other states in the region

3. Support for dialogue processes and an inclusive approach as the US calls on Turkey to join the mechanisms instead of fighting them.

4. The reason Americans report EastMed negatively is sustainability and a green transition. Possibly because it causes tensions.

5. However, they support all the other options that are already being discussed for the utilization of VAT. For example, a pipeline from Cyprus to Egypt for which the processes are already underway. As supported by the projects EuroAfrica (electronic interconnection Greece Egypt) and EuroAsia (electrical interconnection Cyprus Cyprus Israel Greece)

6. Support and encourage the Middle East Gas Forum, which is currently chaired by Cyprus and which in its first statute states that it is open to all countries in the region that respect international law and in particular law of the sea.

Speaking to Vima, Amos Hochstein called for a realistic approach to the EastMed pipeline. “The issue of tensions in the Eastern Mediterranean was not created by energy and will not be solved by energy. It is a much bigger issue. “We acknowledge the existence of tensions, but our policy is not guided by them,” said Amos Hochstein in an exclusive interview with Vima.

The State Department Senior Advisor for Global Energy Security, a key figure in shaping the Biden administration's energy strategy, spoke to us just 24 hours after the release of key elements of the now-defunct, non-paper with which Washington appears to strongly support the promotion of electricity interconnections in the Eastern Mediterranean (Euro-Asia and Euro-Africa Interconnectors), but at the same time considers that the EastMed gas pipeline (EMGP) is not economically viable and is not a project with a long-term perspective – so it would be better to abandon it.

However, Amos Hochstein, one of the most experienced US energy officials who has spent much time in the Eastern Mediterranean during the Obama presidency, adds that the United States “does not tell the countries in the region what to do.” The governments of the Eastern Mediterranean countries will make their own decisions based on their assessments of whether the EastMed pipeline project is a project to which they want to remain committed. All we are saying is that the United States strongly supports energy cooperation in the region, this project is not worth the effort, but we want to lead to projects that are just as big and ambitious, with a much broader impact and resilience over time. In these we will work with you to make them a reality “.