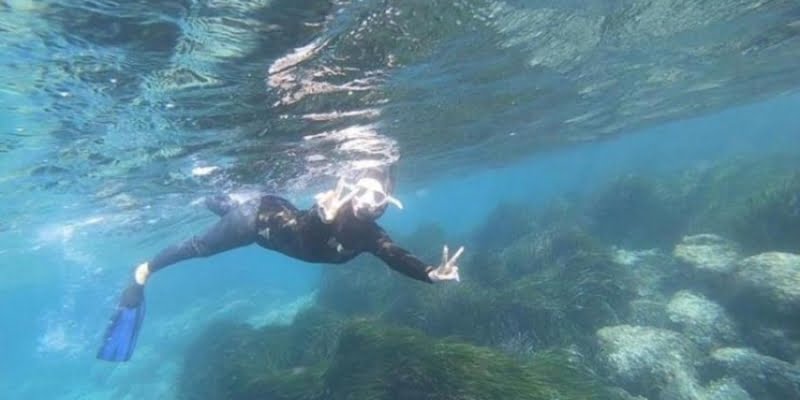 With the aim of promoting diving tourism and the development of environmental awareness and sensitivity for the protection of the sea, the Limassol Region Tourism Development and Promotion Company (ETAL), continues its actions, through the creation of four routes in the marine protected area of ​​Limassol and documentary screening, in a special 180-degree dome.

In a press conference, ETAL hosted journalists in the special dome (planetarium type), which was set up at  Limassol Sailing Center, where a documentary was shown about the rich marine ecosystem that has been created in Dasoudi Limassol, after the sinking of the trawler "Constantis", the ship "Lady Thetis" and various constructions.

As the President of ETAL, Tonis Antoniou mentioned, last week, a total of 540 students from eleven primary schools of the city and province of Limassol, participated in the screening of the documentary in the dome, which was prepared by the Department of Fisheries and Marine Research.

The dome, he indicated, was acquired through a European fund and is offered for similar events, while this specific action was combined with the World Sailing Championship Techno 293 and Techno 293+, which is hosted in Limassol and ends tomorrow.

He said, furthermore, that ETAL hopes that through the creation of the routes in the Limassol marine protected area and the appropriate promotion, Limassol will attract diving tourism from Europe and elsewhere.

In particular, the director of ETAL, Maria Stylianou, spoke about the sea routes, who expressed the hope that “with the routes, with the phone application (Diving Limassol) that we have created for divers and gives information about our artificial reefs, with all the digital tools and the dome that is used to project the reef, we will also develop the love for the sea among the locals, but we will also attract foreigners, to combine their vacations with diving and get to know the beauties of our seabed».

Specifically, the first is a swimming route, with a snorkel, in the shallow coastal zone, at a depth of up to 5 meters, along the seven breakwaters and the remaining three are diving routes.

The first diving route is located around trawlers "Constantis" at a depth of 23 to 25 meters, the second around the passenger ship "Lady Thetis" at a maximum depth of 19 meters and the third includes 11 structures in various sizes and shapes at a bottom depth of 14 to 21 meters.

Besides, the Mayor of Germasogeia, Kyriakos Xidias, initially thanked the Cyprus Sailing Federation for organizing the Techno 293 and Techno 293+ World Championships in Limassol and wished that more children would be interested in the sport in our country.

Referring to ETAL, he said that "our relationship is permanent and covers all levels", noting that, after the creation of the sea routes in the Dasoudi area and on the occasion of the expected notice for the coastal walkway project, "we have already made an allusion to the Deputy Ministry of Shipping, in order to create a base for divers, which will connect the reef with the land»

Finally, he assured of the will of the Municipality to continue the cooperation with ETAL for the development of the tourist product .

For his part, the federal coach of the Cyprus Sailing Federation, Dimitris Dimitriou, stated that on the occasion of the presence of the dome at the facilities of the Limassol Sailing Center, the children had the opportunity to get to know sailing &laquo ?an environmental sport that moves with natural means and which the children showed great interest in and we hope to see some of them train with us&r aquo?.

He also mentioned that, the  235 young sportsmen and women participating, from various countries, in the World Championship, enjoying the sea and the ideal climatic conditions of Cyprus.