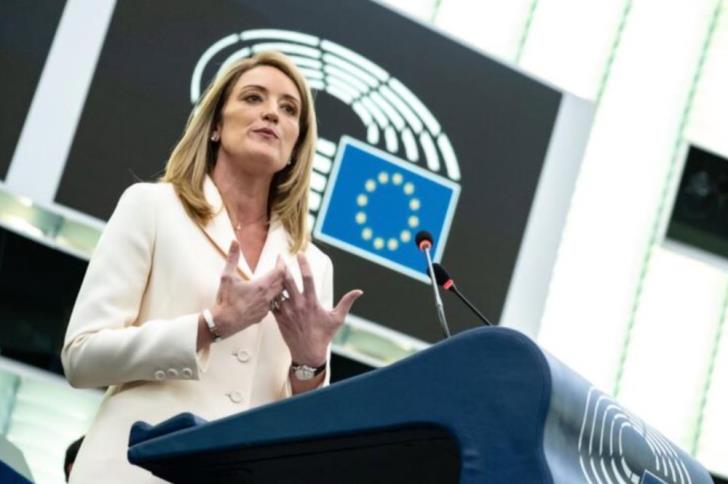 As long as Cyprus remains divided, we can not feel complete, said the new President Roberta Metsola from the podium of the European Parliament, noting that Europe has a legacy of war, but also of healing.

He referred to the need to resolve the Cyprus issue with Europe playing a key role, drawing on its experience, to contribute to efforts to end the division of Cyprus under the auspices of the UN plan. We can never truly be whole as long as Cyprus remains divided.

Asked at a press conference about Turkey's aggressive stance against Cyprus and Greece, he reiterated that Cyprus is the last divided country in the EU. .

Accepting what he said was the legacy of pro-Europe activist David Sassoli, the new president said he would continue to uphold the values of justice, dignity, solidarity, equality, the rule of law and fundamental rights. A policy of hope, he said.

The challenges of the coming years

In the coming years, European citizens will see leadership and direction in an effort to identify the boundaries of European values. It should be mentioned, we should oppose narratives and misinformation that take place and fuel easy cynicism and cheap solutions of nationalism, authoritarianism and protectionism.

Roberta Metzola called on everyone to defend the principles of our founding mothers and fathers who led us from the ashes of war and the Holocaust to peace, hope and prosperity.

“It's important for our judges who are under attack, for the health care providers who are under pressure. For every woman who continues to fight for her rights, for the vulnerable, the oppressed and the abused. It is important for those who are forced to flee natural disasters. For the families of those killed in terrorist attacks. For those seeking protection. To farmers, NGOs and entrepreneurs. For LGBT people and those who continue to be discriminated against because of religion, skin color or gender identity. “For all those who believe in Europe's promise.”

He did not fail to mention the new generation, saying that Europe must listen to our youth this year dedicated to them.

The EP president pointed out the catastrophe caused by climate change, stressing that it is not a problem for another generation. The fight against climate change is clearly stated, it is our common destiny and tomorrow it will be too late.

The Europe Green Agreement and the commitment to be the first carbon-free continent is the right answer, he pointed out. This, he added, is not only a necessity and an urgent need, but it is also an opportunity for Europe to take the lead, to ensure growth, sustainability and prosperity, while reducing emissions.

“The Recovery and Resilience Fund will help our investment restart after the pandemic. Both the green transition and the digital transformation create opportunities. We must be at the forefront of these changes and direct them. And we will do it. “Our European way of opening up economies and open societies is a model that I am proud of.”

Ms. Metsola assured that those who try to undermine democracy, the rule of law, freedom of speech and fundamental rights will never be tolerated. Those who see women as a target and deny the rights of LGBTQI citizens.

“Dictators will never divide us. And, let me say this, to the families of Daphne Caruana Galizia and Jan Kuciak, journalists who were killed for doing their job: your fight for truth and justice is our fight. “To the loved ones of Olivier Dubois, who was abducted for almost 300 days in Mali, I say that his struggle for freedom must become our struggle.”

The first female President since 1999

Guided by the fact that she is the first woman President of the EP since 1999, she reaffirmed the struggles for gender equality, guaranteeing women's rights. “Twenty-two years ago, Nicole Fontaine was elected 20 years after Simone Veil. I stand on the shoulders of giants. “The shoulders of Simone Veil – an inmate of Auschwitz who overcame the shackles of the past, breaking the shackles of the painful part of our European history and paving the way for opportunities that millions of women struggled with but did not have the opportunity.”

Source: www.philenews.com
Share
Facebook
Twitter
Pinterest
WhatsApp
Linkedin
Telegram
Previous articlePictures of another Cyprus: Photos of the snow-covered villages – New cold is coming from Sunday
Next articleStefi Drakou [sub. Of Justice]: An investigation has been launched for a circuit in Cyprus in connection with the rape of a 24-year-old in Thessaloniki
- Advertisement -