F. Fotiou: Turkey's contempt for ECtHR decisions is a challenge 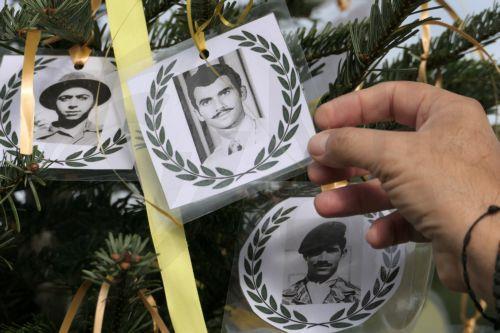 The Commissioner of the Presidency of the Republic of Cyprus, Fotis Fotiou, described the tragedy of the missing and their families as the “most painful and painful wound of the Turkish invasion and continued occupation” .

Speaking at an event on “the missing persons of the Cyprus Tragedy”, which took place in Athens, Mr. Fotiou noted that parents, spouses, siblings and children of those who are still missing complete the cycle of their lives and leave with unanswered questions about the fate of their loved ones the persons.

At the same time, Mr. Fotiou reminded that Cyprus has submitted four appeals against Turkey to the Council of Europe. “In its decision in 2001, the Court condemned Turkey for violating a series of articles of the European Convention on Human Rights, in relation to the rights of our missing persons and their relatives. But also in later decisions of the ECtHR, such as the one in 2014, it again condemned Turkey without it meeting its obligations. Turkey's mockery, denial and contempt for ECtHR decisions are a challenge, not only for Europe but also for international legitimacy.

Of course, Turkey has huge responsibilities, both moral, legal and political, and it should finally cooperate with honesty and humanity to end the drama that the relatives have been experiencing every day for so many decades,” he stressed.

Mr. Fotiou also noted that it cannot be left to the will of Turkey alone whether the condemnation decisions will be implemented, but the international community, the international justice system should be able to impose them. “Regarding this, there is the great question of the time for the international community is also raised: why two standards? Russia invaded Ukraine wreaking havoc and destruction, and the whole world mobilized. Measures upon measures, etc. In the focus, the human losses in dead and missing, for which the international community as a whole is justifiably reacting strongly. But why wasn't there and isn't there even now to the same degree this reaction in the case of Turkey's invasion of Cyprus and the ongoing violations of human rights in our country?” asked Mr. Fotiou.

The Commissioner of the Presidency underlined that if one looks at the history of the problem, as it has been presented repeatedly in the Security Council, the General Assembly and the UN Human Rights Committee, as well as the Parliamentary Assembly of the Council of Europe, the European Commission on Human Rights and the European Court of Human Rights, will find a lot of evidence that clearly demonstrates the magnitude of Turkey's responsibilities.

Mr. Fotiou recalled that it was only after 24 years after its establishment, in April 1981, that it became feasible for the Commission of Inquiry on Missing Persons, in which a representative of the United Nations also participates, to start presenting a project even if it is limited to handover of bones and in several cases individual bones, noting, at the same time, Turkey's non-participation in any of the related actions, as well as its refusal to present its files on the missing or prisoners of war, as required by its Conventions Geneva.

“We do not ignore the work carried out so far by the Investigative Committee on Missing Persons, which is morally and financially supported by the government of the Republic of Cyprus, with the aim of investigating every case of a missing person, including the number of Turkish Cypriots whose names have been included in the relevant directory. At the same time, however, we are not and cannot be satisfied with the pace and the results to date. With sincerity and good will, our side participates in the relevant efforts by facilitating the investigative work and making available to the Commission all the data it has at its disposal. However, this cannot be done by the occupying power for the Greek Cypriot and Greek missing persons cases pending before the Commission, and these are not few, they make up approximately 50% of the cases that have been submitted to the DEA”, emphasized Mr. Fotiou.

Closing, Mr. Fotiou stressed that, without a doubt, it is inadmissible, unacceptable and inhumane, 48 years after the Turkish invasion, to still be looking for missing persons. “But I want to assure that, despite the difficulties and problems and the refusal of the occupying power to cooperate, we continue and intensify our efforts to verify our last missing person case. For this reason, we always work closely with the Greek government, as well as, of course, with the organized groups of relatives. For us, this is an obligation and a debt to our heroes and their families who fought and sacrificed defending the dignity, sanctuaries and loyalties of Greeks everywhere. We will not compromise nor will we give in to the appetites and tactics of the occupying power. We will fulfill our debt to our heroes and to our history as our conscience and duty dictate,” he concluded.

Source: www.reporter.com.cy
Share
Facebook
Twitter
Pinterest
WhatsApp
Linkedin
Telegram
Previous article
The Metropolitan of Kyrenia is not retiring from archdiocesan… He denies the rumors
Next article
These are the magic numbers that give 3,500,000 euros to the Joker
- Advertisement -