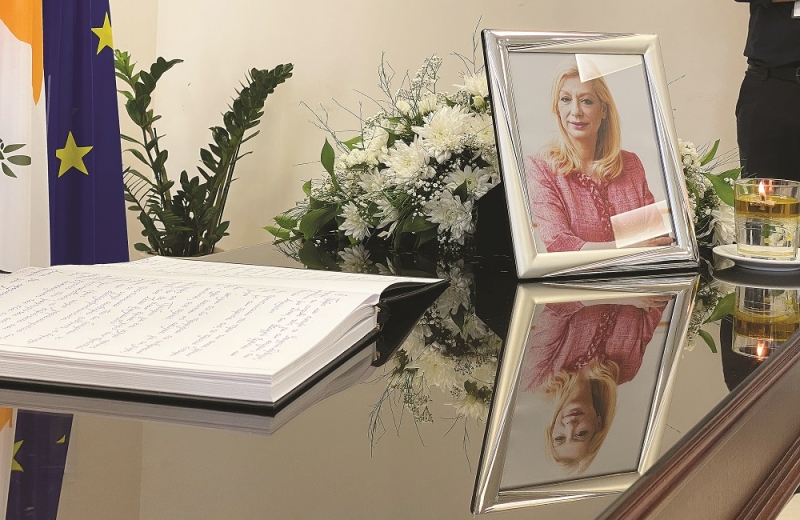 In the case of Zeta Aimilianidou, one can remember the idiom of the funeral procession and agree: “Indeed, the most mysterious, the mystery of death.” A few days before Zeta Aimilianidou was beaten by the subarachnoid hemorrhage that led her to a coma in Athens, there were other discussions about & # 8217; her. Conversations that did not lead to retirement next February, as she, with joy, lived with acquaintances and friends. These were discussions related to the 2023 presidential elections.

It all started on the initiative of DIPA President Marios Karoyan, in the context of the investigation of his proposal for the creation of a government of wider acceptance.

The contacts of the DIPA president concerned discussions with DISY, DIKO and EDEK with the aim of finding a common candidate. After the failure of DIKO in the negotiations with AKEL, the legal complications in EDEK and the first low percentages of Averof Neophytos in the polls, Mr. Karoyan believed that there was a suitable ground for a negotiation.

On the basis of this agreement, the 4 parties had to go through two stages. In the first stage, all together they would draw up a program of governing the country for the next five years. In the second, proposals would be put forward for a common candidate, with the exception of political leaders, who could formulate views and satisfy all parties as a common denominator.

* 67-year-old Zeta Aimilianidou was clearly a candidate for a term. This would give space and time to the collaborating parties in the next five years to better organize and prepare. 50-year-old Nikolas Papadopoulos for 2028.

* Zeta's candidacy foreshadowed a presidential election with the added value of a quality feature. She would be the first female politician to run for the presidency.

* Zeta above all was a very capable technocrat. She knew the state machine, she was a man of works, she was completely accepted by the OEB and the unions, so it could hardly be attributed to her candidacy by class or party characteristics.

* Zeta Aimilianidou's positions, finally, has always been moderate in the Cyprus issue.

In recent years, on the occasion of the coronavirus pandemic, the popularity of Zeta Aimilianidou had skyrocketed. In some polls it exceeded 80%. In collaboration with the Minister of Finance, Konstantinos Petridis, they had prepared, for the data of Cyprus, a colossal program of subsidies, sponsorships and aid, to individuals, groups of employees and companies, which was successfully implemented.

The respect on her face, of course, was timeless. As a technocrat in the public service, which she served from 1979, she belonged to what we call the elite of civil servants: Hardworking, determined, ready to solve problems. He excelled in the 1990s as head of the Cypriot Customs and VAT, in a difficult period of harmonization of Cyprus with the Community Acquis. It was a period when laws had to change, but mainly the mentalities of the Cypriot state and its citizens. It was the period when we had to get better and Zeta Aimilianidou put her little stone in this effort, collaborating with George Vassilios who had undertaken the accession process of Cyprus.

As Director General of the Ministry of Commerce, she was one of the pillars of the successful implementation of the Cyprus Presidency of the European Union. Little Cyprus, led by Andreas Mavrogiannis and 100 other brilliant civil servants, made an enviable presidency.

Where it literally stood out was the two years 2020-2021, when the pandemic swept everything in Cyprus. Lockdowns led to business closures, most companies could not pay their employees, and the tourism industry died. Its ministry, in record time, in co-operation with the Ministry of Finance, has prepared support programs for hundreds of thousands of Cypriots and thousands of companies. It really motivated companies to stay open, it gave support to groups that were hit hard, such as theaters and actors, newspapers and journalists.

He worked with determination and, above all, with ingenuity, managing to overcome the delays and entanglements of the State, sending a huge message: That the state can when it wants. There was a classic case of a public figure who put the country and its people above all else, without dividing people into parties and ideologically.

Zeta Aimilianidou's profile, in short, seemed from the first moment quite attractive for all parties. President Anastasiadis, when informed, was excited. Even Averof Neophytou, who never formally acknowledged during the contacts that his candidacy was conditional, in the face of a possible Zeta candidacy and the prospect of a round of presidential elections showed that even if the others agreed, this would not be an obstacle. .

Anyway, Averof Neophytou has been thinking for a long time that Zeta could be useful for DISY, since even for the mayor of Nicosia in two years he was thinking of proposing her to step down.

As a DIPA executive told “Politis” with knowledge of the whole background, the disease and then its end, deprived Cyprus of the opportunity to make a synthetic and unifying effort so that in the next five years it can enter at a normal pace. and creativity. “Zeta, with her diligence, creativity and ability to make up for differences, could lead a major operation to rebuild the country in difficult times that Cyprus desperately needs.”