First test by the staffs – They open their cards 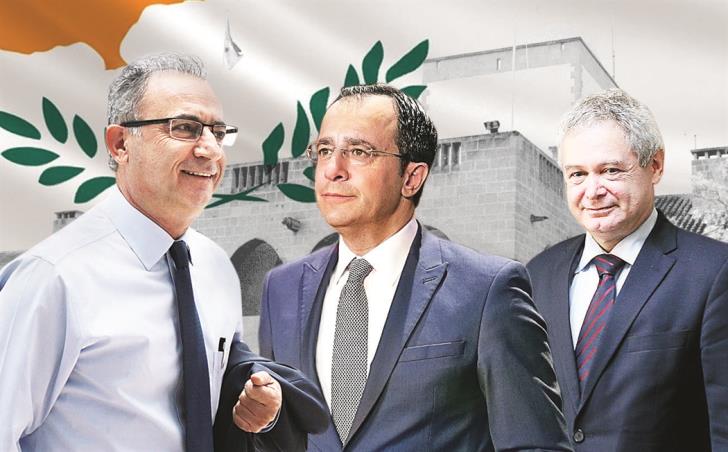 The puzzle of the presidential election is beginning to take shape. Averof Neophytou as DISY candidate, Andreas Mavrogiannis & nbsp; as a candidate of AKEL and Nikos Christodoulidis as an independent, waiting to have the support of DIKO or other parties in the middle. The former Minister of Foreign Affairs declares himself an independent candidate, however yesterday in his statements on RIK radio, he stated that he remains a member of DISY. For Pindarou, however, Nikos Christodoulidis is a DIKO candidate who wants to overthrow the DISY Government. For AKEL, Nikos Christodoulidis is just the other side of the same coin of the Anastasiadis DISY Government.

And somehow, the camps identify themselves and draw their dividing lines, ready to go into battle. The Democratic Alarm now considers that the battle is starting now and from the moment Nikos Christodoulidis has entered the field, it is time to reveal that he is not another alarm candidate, but is the person who turned his back on the alarm family. p>

He is the candidate who becomes the vehicle for DIKO to come to power and for the Democratic Alarm to leave. This word in Pindarou is considered to work in a way that highlights the fact that Nikos Christodoulidis followed a different path from the Democratic Alarm and at the same time touches sensitive alarm strings the idea of ​​becoming the DIKO Government in place of DISY. & Nbsp;

Why does not Mr. Christodoulidis boldly state that he has found them behind the scenes with DIKO and will be the candidate of DIKO ; & nbsp;

“How credible can someone be who until yesterday participated and expressed the government of President Anastasiadis – DISY and today has switched to the opposition?”, Asked DISY MP Fotini Tsiridou.

At the same time in Pindarou they did not leave Nikos Christodoulidis yesterday's differentiation in relation to the message of his proclamation and his position regarding the Anastasiadis Government.

DIKO: False reports about an agreement with Christodoulidis

Christodoulidis entered the ring without a fight

“How consistent is the fact that (yesterday) Mr. Christodoulidis did not find a word to say about the work of the Anastasiadis government but today (yesterday) he remembered to say he was proud of the work of the Anastasiadis government?” How honest is the fact that he sacked President Anastasiadis – who trusted and honored him – with all the previous Presidents of the Republic? & Nbsp; “That in the biography she presented she does not even mention to whom she served the government as a minister and representative”, Ms. Tsiridou pointed out. “How can he present himself as '' independent '' and '' above parties '', to be at the same time a member of the government and the Democratic Alarm faction, but to suddenly find them with DIKO”, he wondered. p>

“With whose policy does Nikos Christodoulidis finally agree, with that of President Anastasiadis and the Democratic Alarm or with that of Nikolas Papadopoulos and DIKO?” concluded Ms. Tsiridou.

On the same wavelength were the positions of other DISY members yesterday in their various television and radio interventions, constantly highlighting the position that Nikos Christodoulidis is now a candidate of DIKO.

DIKO: We did not receive any decision

“DIKO has not taken any decision on the person it will support in the 2023 Presidential Elections. There is no agreement or pre-agreement between DIKO and any candidate. And finally, the decisions of DIKO will be taken in its competent collective bodies, after which the internal party and inter-party dialogue will be completed “, said Mr. Pantelidis.

On the first line of the party's announcement on the first day of Christodoulidis's announcement, AKEL Secretary General Stefanos Stefanou moved yesterday, describing the former Foreign Minister as a man of the Alarm, citing the statements of Nikos Christodoulidis, which he confirms. . “Therefore”, he said, “it is not arbitrary what we said that both Mr. Christodoulidis and Mr. Neophytou are the two sides of the same Government and the same party, DISY”, said in his statements his secretary ΑΚΕΛ.

A line which will be proposed by highlighting as an alternative a candidacy of Andreas Mavrogiannis as was the proposal of the Central Committee to the party base groups of the party.

Stefanos Stefanou stated that “there is a literature, which is developing and they try to make it a fact that Mr. Mavrogiannis also comes from the area of ​​Alarm and the Government of Alarm, “with the secretary general of AKEL noting” no relation “.

According to Stefanos Stefanou, “Mr. Christodoulidis as a Minister of the Government and a key member of this Government defended and is a participant in these policies, from which AKEL wants to get rid. There is no reason for me to argue for the candidacy of Mr. Neophytos “.

” The proposal for Mavrogiannis is cross-party and independent “

AKEL Secretary General Stefanos Stefanou defended the proposal of the Central Committee to the grassroots groups to support a candidacy of Andreas Mavrogiannis, stating that this is a cross-party and independent proposal. Also note that & nbsp; Andreas Mavrogiannis has never been a cog in the Anastasiadis Government, but a career diplomat acting in his capacity. “It does not belong to the Alarm and was not a key cog in the Anastasiadis Government,” said Stefanos Stefanou, who noted that AKEL in the person of Andreas Mavrogiannis makes a cross-party, independent, experienced and knowledgeable proposal, through which it proposes to others. to accompany him to turn the page. & nbsp; & nbsp;

He also noted that his party's proposal “gathers all the necessary characteristics, which ensure that we can have a progressive President with a progressive program, which covers the basic positions of AKEL.

He added that with this proposal “we have an independent cross-party candidate for President, who can face the distrust that exists in a part of society, in relation to party agendas, as well as we have a proposal that has a history, knowledge and experiences “.

Referring to Mr. Mavrogiannis, he said that” as a career diplomat he served Cyprus from various starting points and posts and served all the Presidents of the Republic of Cyprus, from Glafkos Clerides onwards, with the aim of honoring Cyprus, to honor his duties and to honor the trust shown to him by all the Presidents, for the various tasks that had been assigned to him “.

Asked if other meetings with parties will follow, Mr. Stefanou said that AKEL addressed a public invitation “to those parties, which declare and have the position that this situation we live in should end, because of the Alarm for ten years , and turn the page “. He stressed that his party has its doors open and addresses these political forces, as it addresses social forces and society in general, expressing readiness for dialogue.

In addition, he said that Mr. Mavrogiannis had closer contact with party officials to see the basic views and other issues on which he did not have friction, to note that they have found that in the basic objects, where AKEL has red lines, Andreas Mavrogiannis covers them.

The first interventions of the independent candidate for the Presidency of the Republic, Nikos Christodoulidis, gave answers to the criticism against him, which was exercised mainly by the leadership of the Democratic Alarm, immediately after the announcement on Thursday. & Nbsp;

Speaking in RIK, N. Christodoulidis characterized his candidacy as “clearly independent”. The former foreign minister stated that presidential and not parliamentary elections will be held in 2023, and that his candidacy does not depend on the support of the parties.

He clarified that he does not question the role of the parties, emphasizing at the same time that the problems do not have a party color. We also spoke about the need to renew and not overthrow the work of the current government. & nbsp;

He reminded, at the same time, that in 2013 and 2018, Nikos Anastasiadis was not promoted to the office of President of the Republic, only with the votes of DISY. & nbsp;

Responding to criticism of the content of his announcement, Nikos Christodoulidis stressed that he did not submit his government program, but his vision, after a dialogue with society.

Besides, speaking on Politis's radio, Nikos Christodoulidis and answering a question whether he wants to be elected President of the Republic to bring about change or to be a follower of the policies of President Anastasiadis, stated that they are not one or the other. “It is the prospect of renewal that lies ahead. There are areas that need change, and others that have been done correctly, bring results and must be continued. ” relevant inspections by the competent services, he said that there were very serious problems and that is why the program was stopped. Regarding the Commission's letter to him and what his reaction was, he reiterated that this was the reason why the Government decided to end the naturalization program.

Finally, he stressed that he told the truth to the people and did not will renounce his party affiliations and has not asked for or will not be asked to be removed from DISY. & nbsp;