Georgios Pafos: It will take centuries for the Church to escape from his shadow 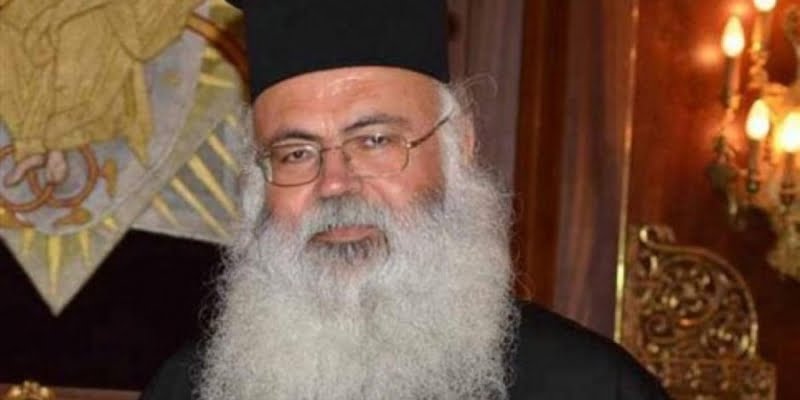 The works accomplished by the late Archbishop of Cyprus Chrysostomos II and the contributions he brought to the administration of the Autocephalous Church, in the 16 years of his Archdiocese, are far superior to any words and any eulogies, emphasized the Metropolitan of Paphos George in his funeral speech for the Archbishop during the exodus service at the Cathedral of the Apostle Barnabas.

The Metropolitan of Paphos said, describing the offer of the exile,  that "Archbishop Chrysostomos II was one of those people who measure History with stellar years and their lives with the bar of responsibility. The examination of his works testifies to his multifaceted and laborious activity.

Especially as Primate, he said, he left an indelible mark on his character. “It will take centuries for the Church of Cyprus to escape, if it can escape, from his shadow,” he stressed. with zeal, marching many times to the border of doubt and disapproval and accomplished a task that none of his predecessors could accomplish.

His first and greatest task, he said, is the restoration of the Holy Synod, as a Synod of the Autocephalous Church.

"The second chronologically, but equally important task of the Archdiocese of the late deceased is the establishment of the Parish Clergy Paying Body&raquo ?, he added.

The Theological School is his third major project.

"The construction of the Student Residence in Limassol, with more than 300 rooms &ndash? of apartments, fully equipped for needy students, exploited by apartment and house owners, was his next big project. Many millions were allocated, but the project will proclaim the eternal concern of the Church for its flock, he continued.

The Metropolitan of Paphos described the magnificent Cathedral of St. Barnabas as the seal of his entire project, founder and patron of the Church of Cyprus.

"Indeed, many centuries will pass before the Church of Cyprus escapes from his shadow. Along with Archbishop Makarios III, who will forever remain as the tireless claimant of the national rights of the Cypriot people, History will also record Chrysostom II as the greatest church reformer and tireless worker for securing social rights and claims of his people. No one else, no matter how much education he had, and no matter how many academic titles he possessed, left behind such a work!», noted the Metropolitan of Paphos.

Referring to the characteristics of the expatriate, he said that God had endowed him with quick perception, clear and broad thinking, amazing self-control and persistent pursuit of his goals. "He also had the feeling that he was carrying on his shoulders all the legacy of his predecessors and the duty to show himself worthy of it", he added. "Why’ this and, although it is difficult to have an acrobatics without vertigo, the blessed one always remained the same. Casual and down to earth. Nor was he carried away by the winds or flattery. He did not enslave his spirit anywhere, nor did he become a subject or servant of any interest. He didn't give in either to’ those  they didn't care about him even s’ those who indirectly threatened him. Much more s’ those, and there were many, especially those, who showed him, at every step, the flexibility of their spines”, he said.

A special characteristic, worthy of attention, of the deceased was his awareness of his pan-Orthodox responsibility for the "stability of God's holy Churches" and avoiding quarrels and conflicts, he added, mentioning indicatively his role in the great Synod of Orthodoxy in Crete, as well as the support of the First of Orthodoxy in his multi-responsible work in every way and against any price. "The friendship and mutual respect that His Holiness and the Blessed had developed was unique. Despite the many objective difficulties, the Ecumenical Patriarch's visit to Cyprus to pay tribute to our Primate and his friend is proof.

But also the Primates of the ambassadorial Patriarchates and the other Autocephalous Churches with the statements they confessed to them the interest as well as the help they received from the Archbishop of Cyprus Chrysostomos B’, said the Metropolitan of Paphos.

Referring to the great test of his health, Pafos Georgios said that "there he showed immeasurable morals, spirituality and courage, which even his worst enemies admired".

"The heroism with which he faced, for more than four years, the coming end with painful messages, is unrepeatable. His mental strength was indomitable, almost superhuman, he emphasized.

Thanks to this unimaginable vitality, he stayed in life much longer than’ as far as the doctors reckoned, he mentioned and expressed the opinion that it should be studied by his biographers.

"Evaluating his work soberly today, we would not say that Chrysostom II is a hero. But he accomplished something that is more important than heroic deeds. He left a work to which the ages will bow. And he taught us that man justifies his temporary passage from this world by working for the common good. For him the fever of creation never fell to low temperatures. And the most important thing was that he was not a besieger of glory, nor was he ever used up in vain displays”, he further emphasized.

Concluding his report to the expatriate, the Metropolitan of Paphos made a special mention of his attitude towards the national issue. In

As the Metropolitan of Paphos, he said, he always stood up against any unacceptable settlement of the Cypriots that would lead to the Turkification of Cyprus. S’ during this period, as president of the Holy Synod, he also led the reaction against the Annan plan. But even in the 16-year period of his archdiocese, he remained the authentic ecclesiastical voice for the defense of our national rights.

His death, he continued, unfortunately finds our national cause at its most difficult turning point. "With Turkey not hiding its ambitions for all of Cyprus and our side not having fixed goals and a monolithic pursuit of them". I hope, concluded the Metropolitan of Paphos, "the fighting spirit of the Blessed One to awaken us from the national lethargy to regroup forces and pursue the liberation of our country".

PtD: Cyprus was lucky to find an indefatigable Hierarch