Half of Greece without parades 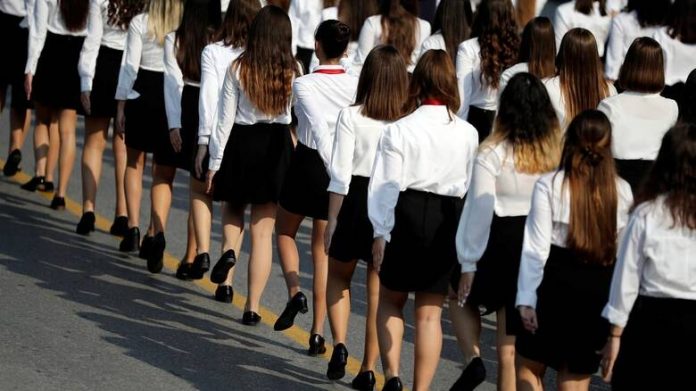 More or less the program of parades and other events in Greece for today's national anniversary of October 28. The coronavirus and other circumstances led the authorities to cancel the events in several cities and the program will be largely stalled,

According to the Greek media, the eruption of coronavirus cases, especially in northern Greece, with daily infections on Tuesday (26/10) exceeding 4,000 across the country , brings changes in the celebration of the anniversary of October 28. Thus the pandemic led to the cancellation of student parades in various parts of the country, with the latest decision concerning the cancellation of parades throughout Thessaly .

At the same time, the spread is particularly high in Magnesia, which in the last 24 hours recorded 221 cases of coronavirus. The data from the region of central Greece is worrying, as it now records 116 positive cases per 100,000 population.

Those attending the parades should wear a mask, according to government spokesman Giannis Oikonomou. “I urge everyone who comes to watch the parades to follow the current health protocols, to wear a mask, as this is required even outdoors when conditions of coloration prevail. For those who parade, the use of a mask will not be mandatory, since they will be lined up. However, before and after the parade, they should also wear their masks “, said Mr. Oikonomou.

Cancellation in Thessaloniki due to national mourning

For a different reason yesterday's student parade in Thessaloniki was canceled . Wednesday (yesterday) was declared a day of national mourning, as the funeral of the president of KINAL, Fofis Gennimata, who passed away on Monday (25/10) took place.

Only flag bearers and guards in the prefecture of Serres

Only flag bearers and representatives of schools and cultural associations will participate, along with the military units, in the parades for the anniversary of NO in the prefecture of Serres, as decided today.

Assessing the epidemiological situation in the prefecture, the stakeholders decided to modify the conduct of the parades in terms of the participation of students and representatives of associations and organizations.

This decision does not affect the participation of the military units that will parade normally.

The decisions for cancellation of the parades per Region

By decision of the governor of Eastern Macedonia and Thrace Christos Metios, the parades throughout the Region are canceled, specifically in Drama, Kavala, Rodopi and Evros, due to the increase in cases of coronavirus.

The decision states that the part of the parade of October 28 that concerns the participation of the student youth and the cultural and voluntary organizations and associations is canceled without mentioning the military parades.

It is also pointed out that in addition to these, the local programs apply as they have been announced.

Specifically, the announcement states: “Following the above, we know that due to the increase of Covid-19 cases in the Region of Eastern Macedonia and Thrace and to avoid further synchronization and worsening of the epidemiological situation, the part of the parade of 28th is canceled throughout the region. October regarding the participation of the student student youth and the cultural and voluntary organizations and associations, otherwise the local programs are valid as they have been announced “.