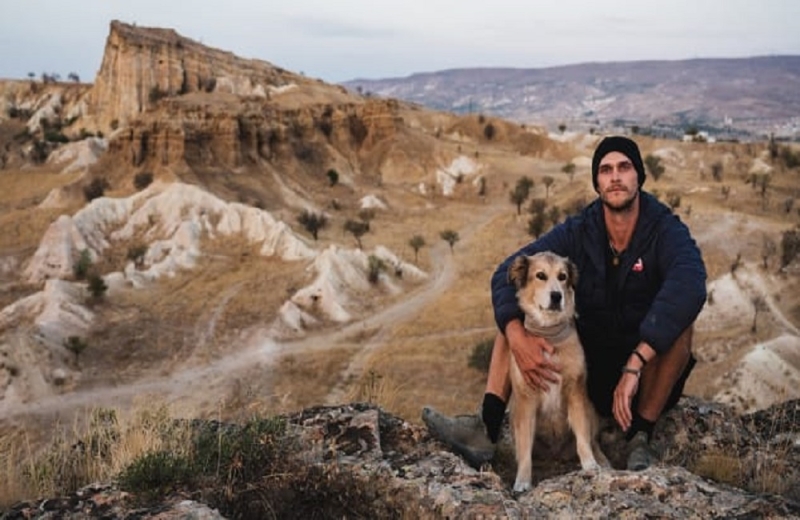 Very few people have attempted to circumnavigate the world on foot, and even fewer have succeeded in completing the journey.

On May 21, 2022, Tom Tercich of New Jersey became the 10th person to do so. this remarkable feat, while his four-legged companion Savannah was the first dog to accomplish such a feat.

Tom and Savannah celebrated their big achievement with a huge homecoming party, attended by many of his friends and family along with many fans.

The moment of triumph took Tom and Savannah to the end of a seven-year, 48,000-kilometer (29,826-mile) journey for which he had spent a lot of time working and preparing.

“It was very surreal,” Terchich tells CNN Travel from his parents' home in the town of Hunton in New Jersey.

“I've been imagining how the end would be for a long time. And when it happened, there were people on the streets walking with me.

“The primary feeling was just relief. This venture dominated my life for 15 years and to finally be able to put it behind me was amazing.”

The inspiration for the trip stemmed from a tragic loss in 2006 when his longtime girlfriend Anne Marie died in a jet ski accident at age 17.

“Her death shaped me,” he explains. “He was a much better person than me. I began to dwell on the thought that I was going to die die one day and it could happen at any time. And then I started to reevaluate everything.”

Tersich, who has been compared to Forrest Gump, Tom Hanks' character in the 1994 film, decided he needed travel and adventure in his life and began looking all the different ways he could.

After reading about Steven Newman, who was listed in the Guinness World Records as the first person to circumnavigate the world, and walking adventurer Carl Busby, who has been circumnavigating the globe on foot since 1998, Tercich began to respond himself to this challenge.

“Walking seemed like the best way to take in the world and force yourself to go to new places,” he says. “I didn't just want to go to Paris and Machu Picchu, I really wanted to understand the world and see how people live every day.”

Once committed to his mission, Terchich began planning the route while trying to raise the money for his travels.

He managed to save enough to last him about two years on the road, working summers while he was on the road. to college and moving back in with his parents after graduation.

However, just before he left, the owner of a local company, Philadelphia Sign, learned of his plans and decided to sponsor his trip.< /p>

“This businessman happened to know Anne Marie and her family,” he says. “And he just wanted to support me in any way he could.”

Nearly nine years after he first came up with the idea, Tercich took the first step of his walk around the world.

He started on April 2, 2015, just before his 26th birthday, pushing a baby stroller containing hiking gear, a sleeping bag, a laptop, a DSLR camera and a plastic box, which he used to store his food.

Tercich says he devised his route with two main factors in mind: he wanted to “cross every continent and travel with as few bureaucratic problems as possible.”

“I thought it would be about five and a half years” , says. “And that turned out to be pretty accurate for actual walking.”

The entire journey ended up taking seven years, mainly due to two major delays. The first occurred when Tercich fell ill with a bacterial infection, which took him several months to recover from, and the second was due to the Covid-19 pandemic.

Inevitably, he experienced various ups and downs along the way, when, for example, he found himself invited to local weddings in both Turkey and Uzbekistan while being held captive at knifepoint while in Panama.

Before setting out on the long walk, Terchich had traveled very little. He had visited England, Ireland, and Wales during high school exchange trips, and had vacationed in Canada and the Dominican Republic.

He also didn't have a huge amount of hiking experience, although in he had previously completed a 10-day hike with a friend, as well as some on the weekend.

The first leg of the journey found him walking from New Jersey to Panama. About four months later, Cherchich got his companion, the puppy Savannah, from an animal shelter in Austin, Texas.

While he had no intention of getting a dog at first, he struggled to relax, especially when sleeping in a campsite. , and he kept waking up during the night thinking he heard something coming.

He felt that having a furry friend by his side who could “guard” him at night would make all the difference, and this it turned out to be true.

“She was fantastic,” he says of Savannah. “It's just nice to have someone to share some moments with.”

Once in Panama, the pair flew over the Darien Gap, a dangerous stretch of jungle between Panama and Colombia. After that first year on the road, Cherchich created an account on the donation platform Patreon so that his followers have the option to help fund his travels.

Most of the second year was spent walking from Bogotá, Colombia to Montevideo, Uruguay, where they took a ship to Antarctica.

During that time, Cherchich briefly returned home to the documents he needed to travel to Europe with Savannah.

After arriving in Europe, the couple walked across Ireland and Scotland, but were forced to take an extended break when Cherchich fell ill.

“I threw in the towel there [in Scotland] and went to London,” he says, explaining that he was in and out of hospital for weeks while in the UK and eventually returned home to the US to recuperate.

Tschertsich, who documented his journey on Instagram and his blog The World Walk, continued the adventure in Copenhagen in May 2018, but it would be some time before he was back to his usual self, both mentally and physically.

“When you're walking out and spending all that time alone, you really have to keep yourself company,” she explains.

“Especially when you're constantly exposed to the elements of nature. And so it really wasn't fun for me at all.”

Although Cherchich admits he began to doubt whether he could continue, he says he never seriously considered quitting.

“There were definitely times when I wasn't really in a good mood,” he says. “And I was thinking, 'What am I doing out here?' I could be with my family and my friends, and instead I'm walking in this cold rain in Germany.

“But I don't think I would have ever stopped. I had been thinking about this ride for eight years before I even started it. So it would be crazy to give it up after a few years.”

It wasn't until he walked the Camino de Santiago, a pilgrimage that includes multiple routes in Spain, France and Portugal, that he began to feel ready to dive back in. fully on his journey.

He and Savannah then crossed into North Africa, where they walked through Morocco, Algeria, where he had a police escort, and Tunisia.

From there they passed through Italy, Slovenia, Croatia, Montenegro, Albania and Greece. After Greece, they headed to Turkey, where Cherchich became the first private citizen to be allowed to cross the Bosphorus Bridge on foot.

They then traveled to Georgia, in the Caucasus mountains, and Azerbaijan, a country on the border of Eastern Europe and Western Asia, just as the pandemic hit. This ultimately meant that they were forced to stay in Azerbaijan for at least six months.

The Way Back Home

Then we just waited until we got to any place. of Central Asia,” says Cherchich, who initially aimed to travel through Uzbekistan, Kyrgyzstan, Kazakhstan, and Mongolia, before flying to Australia and then back to the US.

Unfortunately, the strict travel restrictions in place at the time meant he had to abandon his plans to visit Australia and Mongolia as both destinations were closed to international visitors for around two years, as was Kazakhstan.

After walking through Kyrgyzstan, a small Central Asian country bordering China, Savannah and I flew to Seattle in August 2021 with the final destination returning home to New Jersey.

Of all the places he crossed during the trip, Terczych says Wyoming, the least populated state in the US, was the most difficult. along with Savannah for an entire weekend without seeing so much as a store or even a person, before finally coming across a tiny gas station.

During their world tour, the pair walked across six continents and 38 countries, spending most nights camping.

Guinness World Records sets the requirements for a round-the-world walk at 18,000 miles (about 30,000 kilometers) and crossing four continents, a goal that Cherchich surpassed.

“The thing about Savannah was that she always had a lot more energy than me,” he says. “That [walking from country to country] is all she's ever known.

“There were times when we'd go through the desert and I'd collapse at the end of the day and she'd come with a stick and want to play.” .

Once they were firmly back on US soil, Cherchich was more eager than ever to complete the long journey and get back to normal life.

“Seven years is a long time,” he says. . “As soon as the end was in sight, I just couldn't wait to get back. I was ready to hang out with my friends and family again and not pack my tent every morning.”