Intervention of Chr. Tsouroulis about what is happening in the Central Prisons (VIDEO) 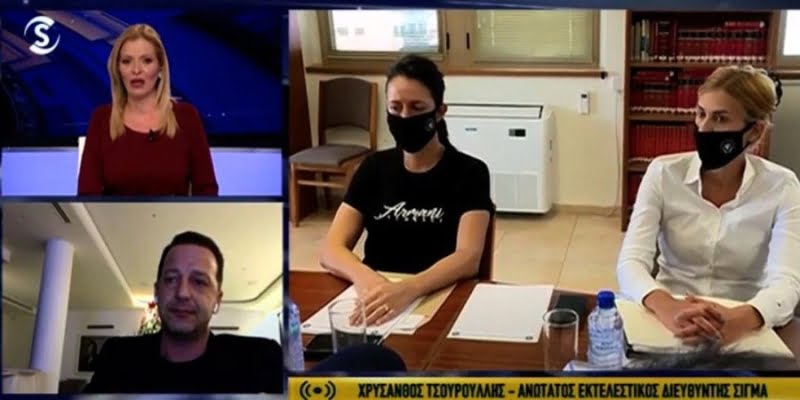 The Chief Executive Officer of SIGMA Chrysanthos Tsouroullis intervened in the Events Sectors, after the stormy developments brought by the  announcement issued at noon on Friday by the Attorney General and the Assistant Attorney General of the Republic in relation to the commission of criminal offenses inside the Central Prisons.

He noted that he cannot perceive more is the central narrative of the Director of the Central Prisons. "Her central narrative, that is, is that the Attorney General and the Assistant Attorney General wanting to exterminate her, organized a murder inside the Prisons to create an alibi and say what they said because of this event and therefore what they said today no one should take it into account&raquo?, he wondered.

The allegations, he emphasized, are very simple. "The Central Prisons of this place have become the headquarters of a criminal organization", he added.

“Where else does the Director of the Central Prisons live?” If these are the prisons for which we have been receiving awards for the last 8 years, as he claims, then we have a problem,», he said, adding that he refuses to answer the silly pseudo-dilemma of Katsounotos or Aristotelous.

Chrysanthos Tsouroulis emphasized that these are not speculations, they are real facts. "A central question is raised. Where is the Minister of Justice? If the political leader does not want to take part in this story, will the President of the Republic do something or wait for God to act? Will we become obstinate again and run behind developments until another bad thing happens, when another quintet is organized, when more drug deals are made, when other crimes are committed with the use of phones?

He added that "it is the same practice and audacity that dictated that the police officers with the Assistant Chief of Police be outside the Central Prisons and try to get inside the prisons to find out what is going on and make them wait outside for 4 hours." ?. He pointed out that this in itself should be a concern because while the setting is so heavenly, the police and road ulama waited for so many hours outside the prisons. "Who had to hide and make up what? Where again was it heard that the Chief of Police wanted a special permit to fight a crime that everything seems to be organized from the prisons.

He also said that "there are no camps and we will not choose nor are we between Katsounotos and Aristotle. That is not the issue. The central point is what happens in Central Prisons.

He noted that what will come of the finding for Mr. Katsounotos is the subject of another investigation. "Let the results come out and if it shows what it shows, the legal path should be followed. What does one have to do with the other? Shouldn't we always be together in this place? This has the result that no one is to blame.

Finally, he mentioned that "many people called us extreme in the pandemic. Many still call us extremists today. Our placements are clear. When it comes to protecting human life, our stance is non-negotiable. We are together with life, light and no shadow.

For her part, News Director Petra Argyrou said that today's positions of the General and Assistant Attorney General should have shaken the entire state system and institutions.

She added that an entire society is at risk, it is put in endanger the public safety of people inside and' outside of Prisons. "SIGMA is also fully justified in its revelations that Prisons are turning into dens of lawlessness with convicts organizing murders using mobile phones, even using and dealing drugs".

Furthermore, he said that from the first moment there was an attempt to disorient public opinion from the essence of the issue. "The bottom line is what is happening inside the Central Prisons. In a privileged state where there is a judicial body that makes some decisions, criminal investigations are conducted, various findings are found that cannot help but pop one's nose. The Government cannot not take measures when the Attorney General warns of a risk to public safety.

He clarified that SIGMA tried to contact the Minister of Justice many times today. "He chooses silence and to be non-existent. The President of the Republic should take positions on all that is happening because it is a matter of public interest and public order.

He emphasized that the response of the Directorate of Prisons cannot be interpreted differently from an attempt to blackmail the General Prosecutor and the Assistant Prosecutor. "We need to open another discussion that has to do with human rights inside prisons. We have witnessed the ultimate right of life being lost. We are with the truth and the human interest».

Read also: How the Directorate of Prisons responds to the announcement of the Legal Service

Source: www.sigmalive.com
Share
Facebook
Twitter
Pinterest
WhatsApp
Linkedin
Telegram
Previous article
They fought, he got out of the vehicle and sent him to the hospital
Next article
A 10-year-old boy was run over by a vehicle in Latsia. He was taken to the hospital
- Advertisement -