Koulafeti-Michalaros: The lost homelands are the root of a memory that concerns us 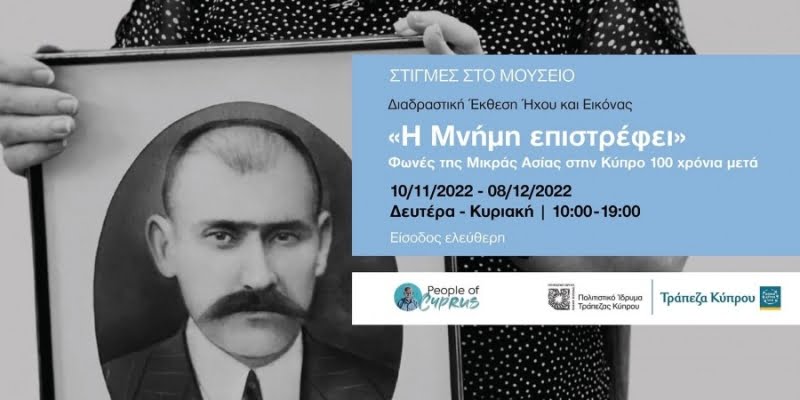 Lost homelands are the root of a memory that concerns us, the contributors of the exhibition “Memory Returns” declare at KYPE. Voices of Asia Minor in Cyprus 100 years later» and of the People of Cyprus group, the historian Iliana Koulafeti and the journalist Christos Michalaros.

Asked how the idea of ​​the exhibition came about, Iliana and Christos explain that the People of Cyprus has for some years now opened up its parallel activity with various projects, which do depart from the triptych of “history – photography – publication”. ;, however "they are part of our common DNA, of us and of the world that follows us".

"Whatever we do, we do it because it concerns us, because it touches our most sensitive chords and because we worship to listen and record stories and then share them with the world that is also thirsty to read, hear or see a piece of the identity of this place”, they report to KYPE.

This particular exhibition, they point out, has as its occasion the 100th anniversary of the Asia Minor Catastrophe «and looks back, towards the memory that defined and shaped us. Lost homelands, such as the regions of Asia Minor, are the root of a memory that concerns us and the people who carry it alive within them. “It's important not to forget,” they say.

Iliana and Christos state that one day, going to Agros to complete the filming of the mini-documentary they were preparing for the last Christmas that Grigoris Auxentiou spent at the house of Pope Christodoulos, "conversation after conversation the framework of the project was formed. To a large extent, it is an idea of ​​the street».

Speaking about the project of gathering the material that forms the core of the exhibition, the contributors state that they did not face any serious difficulties, adding that "the guidance and contribution of the Cyprus Asia Minor Association was catalytic". Iliana and Christos explain to KYPE that they collected some of the most interesting stories that fell on the table and contacted the participants, "who with enviable willingness and joy agreed to talk and be photographed for the exhibition". In fact, they point out that "the fact that all of us were completely honest regarding our intentions, our questions and answers, but also our approach as people who love the memory of Asia Minor, made things quite harmonious".

Answering a question about the find that shocked them the most, the authors of the exhibition mention the voices that tremble when they remember, the looks that sulk when they relive through memory the people who raised them, some repressed children and some "why?" that remained unanswered, few moments of bitterness and many moments of joy. All this, they add, will be given through the narrations that will be heard through audio excerpts in the exhibition itself through special devices.

Answering a question from KYPE, Iliana Koulafeti states that she does not have any tangible relationship with Asia Minor, but she does have relationships with the culture that shaped her as a person. "This culture is not one, just as our identity is not one. “Our roots are roots that start from the place of origin of our own people and branch out further,” he says characteristically. She adds that her own roots go back to Carmi and the Peloponnese, but reach to the places where Hellenism existed and still exists.

These roots, he explains, "are translated into art, music, literature, our small, daily habits, language and how’ extension to the Cypriot dialect, the dishes, the flavors and the wishes that we will exchange at a large table.'' Iliana emphasizes that her bond with Asia Minor is a bond that has been formed "unknowingly" but has shaped it consciously and unconsciously, just as it has shaped our collective identity.

For his part, Christos Michalaros states that his grandmother, Antonia Karydis, his mother's mother, was born in the refugee settlement “Finikas”. of the island of Salamina by Chiotis Michalis and Eftychia Kolaros, who was a refugee from Alatsata in Cesme. Afterwards, and because the family could not support all its children, it was given for adoption to the couple Stefanis and Nicoletas Karydis (or Karydakis), one a refugee from Constantinople, the other from Kalamata.

Grandma Antonia, Christos remembers, "preferred to drink her coffee in a glass cup, her sister Maria cooked amazing recipes from the civilian kitchen, while from time to time stories were heard about pounds that were buried in the yard of a house and waiting strongly that their natural owners go and dig them up, thus offering redemption to a distant sorrow of return».