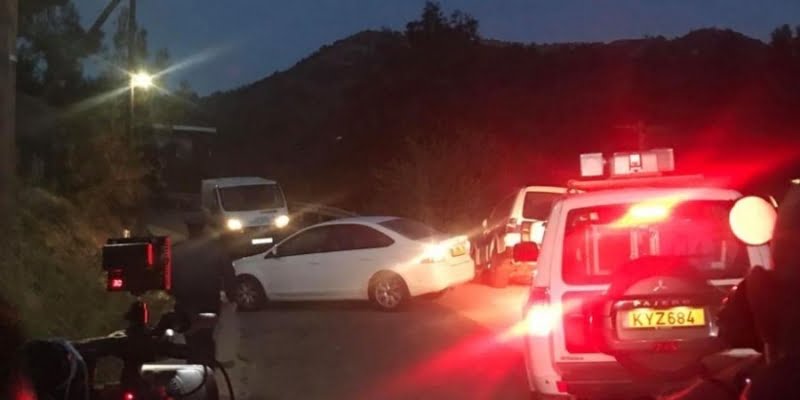 The 40-year-old man, who was sentenced to life in prison for the murder of 58-year-old Giannoula Hatzigiannis in Marathassas House in November 2018, appealed.

According to the facts of the case, the 40-year-old "while riding in the victim's vehicle in the village of Oikos Marathasas, sitting in the back seat, he killed the unfortunate Giannoula Chatzigianni with the use of a knife, which he made sure to buy that day's breakfast from a stand in the area.

As we pointed out in our decision, the 40-year-old literally mutilated the victim, inflicting multiple blows with the knife on various parts of her body with a key blow to the heart, which was also fatal.

The 40-year-old appealed the decision. , relying mainly on the argument that premeditation was not proven before the Court of First Instance. In particular, he claims that the Court of First Instance, in the context of the legal evaluation of the data presented to it, essentially shifted the burden of proof onto the shoulders of the Defense to prove that premeditation was not documented.

He also claims that the trial court improperly evaluated the testimony before him and made findings for which there was no relevant testimony.

The issue of the inadequacy of defense counsel< /p>

The 40-year-old complains that he did not receive a fair trial on the one hand due to incompetent and/or insufficient legal counsel,  he admitted that his counsel did not present before the Court of First Instance testimony that strengthened his position of non-existence of premeditation and, on the other hand, due to the unsatisfactory and/or adequate translation of the proceedings, resulting in the deprivation of his right to effectively present his own version and defense.

For its part, the Supreme Court notes that "it is clear that it is not enough that the legal representation is insufficient or incompetent, but it must be such as to make the process unfair and the judgment of the Court unsafe. Such cases can only be rare.

The 40-year-old's complaint, in this case, in relation to his representation by the defense attorney before the Court, basically lies in the fact that the written statement taken from him by the Police, where he argued for the lack of premeditation, was not presented to the Court. He cited the fact that he considered that his client's testimony was before the Criminal Court as part of the evidentiary material of the case that had been filed during the referral stage, as an incorrect handling by his advocate, not knowing that such evidentiary material is filed for a specific purpose and does not constitute part of the main trial.  And that the 40-year-old relied on this false impression of his lawyer.

This, according to the 40-year-old's submission, precluded the Court from examining his own version of the disputed facts. As his lawyer put it, due to the error of his lawyer, the 40-year-old was deprived of his right to present his most substantial version, with the result that his trial became unfair. Given that the testimony of the Prosecuting Authority regarding the element of premeditation was circumstantial, it was of the utmost importance, as emphasized, that the first instance Court evaluate the claims of the 40-year-old regarding the circumstances under which he caused the death of the victim.

However, when the Criminal Court invited the 40-year-old to read his plea of ​​not guilty based on his lawyer's previous statement. The 40-year-old, however, spontaneously answered "I don't want to read it" and made a lengthy statement orally.

That is to say, it was the same 40-year-old who during the stage of his innocent statement freely stated and, despite the previous statement of his lawyer, that he did not wish to read anything, but to say them without reading them. Kat' following all of the above, the absence of such a written statement of the 40-year-old did not create any gap in his Defense, with the result that there is no basis for the argument of insufficient representation which, in fact, had the consequence that the trial process became unfair.

"According to the admissible testimony of M.23, initially, she saw the accused holding the victim with one hand and hitting her in the neck with the other. At this point in time there was a break in her sighting, after she got scared, she hastened to lock the door and windows and went up to her room. When she looked again, from the window of her room, she saw the accused, who had changed his position – since he was now standing – and was hitting the victim in the chest with the knife.

The accused then got out of the vehicle and in a gruesome and heinous act of victimization, he also punched her twice, as if the multiple blows with the knife were not enough to kill her. The duration of the attack shows two things: First, the determination to kill the victim (which relates to the previous element we cited) and second, the unrepentance of the defendant's decision.

As Mr. Aristides very correctly put it, the defendant, for the short time it took until M.23 locked the door and windows and went up to her room, had the opportunity to reflect on the consequences of his actions and to abstain from their implementation. Doing so would potentially impede pre-study documentation. Ant' however, he continued to hit the victim, including the fatal blow to the heart. his point of view, they easily lead to the conclusion beyond any doubt that the 40-year-old premeditated the killing of the victim, ignoring other testimony that created doubt or that was not consistent with premeditated murder.

In the decision it is stated that "that the exact spring for the murder of the victim remained unknown even if through the innocent statement of the 40-year-old it became clear that between him and the victim there were some kind of financial transactions without, however, their nature being made clear, is not a matter affecting the proof of the offence.

The accused in his plea of ​​not guilty (the only evidence raised in his defence) did not speak of provocation or loss of self-control. Instead, he claimed he had a very good relationship with the victim. He did not even remember the process of killing the victim, according to his words. All he claimed is that when the victim refused to give him €300, he beat her. Beyond that, there is no evidence of argument or discussion, let alone provocation and loss of self-control.

We have considered with great care all that has been brought before us. The 40-year-old man, carrying a knife, was waiting on the street for the victim to pass in her vehicle from a point on the route he knew she made every day. He signaled the victim to stop and got into the car. When at some point along the way the victim's passenger got out of the car, the 40-year-old did not move to the front seat, but remained seated in the back seat. Then the 40-year-old killed the victim.

According to an eyewitness, who heard a woman's voice calling for help, the 40-year-old was holding the victim's head with his right hand and the knife with his left, which he then hit on the victim's neck. Some time passed before the eyewitness entered her home, locked the door and windows and went up to her room.

When she looked again she saw that the 40-year-old had changed his posture and was now standing. inside the vehicle and stab the victim in the chest with the knife. He then got out of the vehicle, opened the driver's door, punched the victim, who in the meantime had leaned into the passenger seat, and, running, left the scene.

Considering the above we have no no doubt that the Criminal Court correctly judged from all the actions of the 40-year-old that he premeditated and, based on this premeditation, executed the murder of the unfortunate victim.

Read also: Life sentence to the 40-year-old for the brutal murder of Giannoula in House of Marathasas