MINISTERS: The situation in Protaras is unprecedented – 35 people were rescued 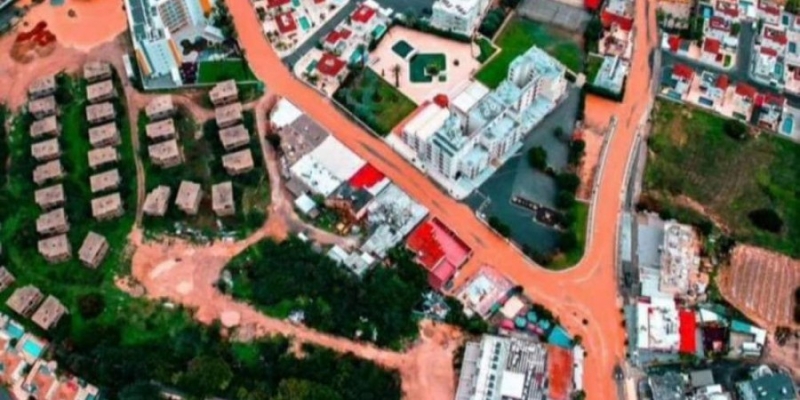 The free province of Famagusta was visited by the Minister of the Interior Nikos Nouris, who toured the areas affected by the torrential rains of Paralimni, Protaras and Ayia Napa.

Then the Minister of the Interior presided over  meeting at the Municipal Hall of Paralimni, where the Mayor of Paralimni Theodoros Pyrillis participated,  municipal councillors, representatives from the Famagusta District Administration, the Fire Service, the Civil Defense and the Police.

In his statements after the end of the meeting, the Minister of the Interior stated that he had a meeting with all services in the free area of ​​Famagusta to deal with these "extremely extreme weather phenomena". He noted that the accumulation of water clearly shows that this is an extreme situation, stressing that the services have all been mobilized since the morning starting from  services of the municipality of Paralimni which have the general mandate and which are supported by the civil defense services, the police fire service and the provincial administration.

As the Minister mentioned, a total of 35 people who were trapped in the waters have been rescued so far and more than 60 cars that were in danger due to the height of the water have been towed. He added that together with the more than 200 calls received by the Fire Service, the magnitude of the problem is immediately apparent, which is mainly focused on the Paralimni area.

"It is an extremely local phenomenon, which we hope that with the recession that the meteorological service has informed us that it expects to have in the afternoon hours, it will be possible on the one hand for the water to move towards the sea and of course for the services to be more active so that we can precisely help the people,' he said.

He noted that at this time the personal safety of citizens is a priority and that already 16 crews from all services are out and active and will remain in the area.

"The EMAK has also been called which is in the area for rescue issues and together with all the services and especially the civil defense which will work together with the competent services always under the coordination of the local authority, I hope that we will deal with the phenomena', he said.

Mr. Nouris expressed his thanks to the people of the Fire Service of the Municipality of Paralimni, the Police, the Provincial Administration of Famagusta, the Civil Defense and all the volunteers who are helping to deal with this extreme weather phenomenon.

In response to a journalist's question about whether it was found that there was damage to houses and hotel units, Nikos Nouris said that he is sure there is and said that the assessment will be done by the municipalities of Paralimni and Ayia Napa. He added that the rescues were extremely successful, while he characterized the condition of the sea in Protaras as unprecedented, which turned red with the movement of tons of soil, and said that the water is at an extremely high altitude. He urged people wherever and whenever there is no reason to confine themselves to their homes and not to traffic.

The Mayor of Paralimni Theodoros Pyrillis spoke of a rather difficult day and thanked the Minister who immediately ran to stand by them, contributing in this way and conveying the state's support to them.

He mentioned that there are crews for to both help the people but also to keep the road network clean and he said that the efforts will continue in the afternoon, having mobilized all the staff of the Municipality of Paralimni.

"It needs coordination. There are some points in particular that are close to Γ’ “Paralimni Primary School is where we are focusing our attention, so that we can help prevent houses from flooding,” he said.

He noted that the phenomena were really so extreme that if a lot of measures had not been taken in the past with works that had been done, the problem would have been much bigger. He added that the Municipality of Paralimni is already in the process of completing the master plan for rainwater, a project that will cost 7 million euros, is co-financed by the Cohesion Fund and will start in 2023.

The Minister Interior Minister, in turn, said that the fact that the center of Paralimni does not seem to have been affected by these huge problems and volumes of water, is due to the fact that in previous years, a proper planning for the runoff of the rains has been carried out which has paid off clearly.

So what will be done, he said, "is the completion of this effort so that we don't have these phenomena to the extent we have today". He noted, however, that these types of phenomena, which are obviously among the huge environmental problems affecting the entire world in recent years, are extreme and  they will always exist.

VIDEO: The moment citizens were rescued by the Police due to the rains