New stage of Limassol: Contract for management does not ensure the public interest 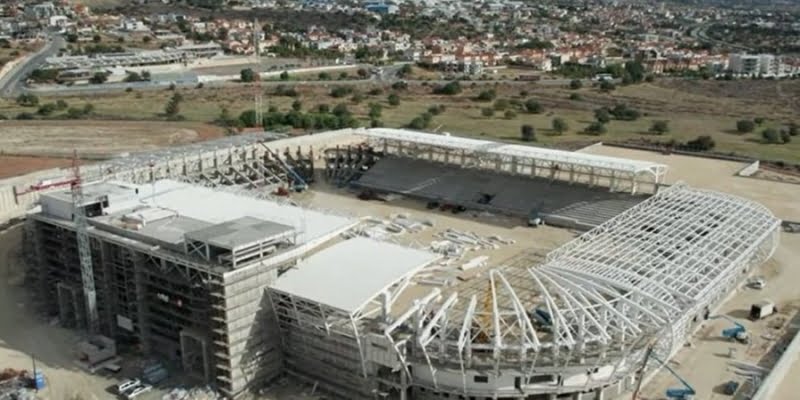 The contract between the KOA and the three Associations of Limassol, for the management of the new football stadium in Kolossi, does not ensure the public interest, states the Audit Service (EA) in its relevant report posted on website on Thursday. Questions are still being raised as to the compatibility with the signed contract of giving the stadium the name of a private supermarket chain.

In its Special Report on the subject of "Control of Public Tenders and Public Contracts of the Cyprus Sports Organization", EY, among other things, refers extensively to the issue of the construction of the new Limassol football stadium in Kolossi, as well as its management.

It is also stated that, despite the relevant letters sent by the Service both to the Agency and to the State Aid Control Supervisor (EEKE), which emphasized that as a matter of principle, if state property is to be given to private individuals, this should done through open and transparent procedures for the purposes of equal treatment and non-discrimination and not, as in this case, by directly assigning the management of the stadium to the three Associations of Limassol, finally on November 15, 2022, the contract was signed between the CMO and the of three Unions, against an annual rent of €400,000, "which, in the opinion of our Service, does not ensure the public interest". It is also added that the amount determined as the annual rent “falls short of what, based on the European Commission's interpretative announcement, constitutes the market rent”.

The Service also says that it had mentioned that, if it is judged that the assignment in question constitutes state aid, it will necessarily be necessary, on the one hand, to secure/precede the positive opinion of the EEKE and, on the other hand, not to put the measure into effect, unless it has previously notified to and approved by the Directorate General for Competition of the European Commission.

In addition, they said, the report says, that in the study done by KPMG Consultants for the CMO, on the issue of stadium management/operation/maintenance, the annual amount of €851,000 had been calculated, based on lower data than the really, like e.g. the estimated value of the Project (€28.4m. instead of the original cost of €40m.) and the rate of return on use (only 3%). "EEKE informed us that considering that the stadium is almost completed, the three Unions are pushing for the use of the stadium, it is an investment of several millions and under no circumstances should it not be used in a similar way in a timely manner and the completion of the notification process in GDAEE it cannot be done immediately, but it is a matter of a few months or so, some temporary intermediate solution could be found for the use and/or management of the stadium, until the relevant approval is received from GDAEE», it states.

EY also notes that, after the signing of the contract, the stadium was given the name of a private supermarket chain and the Ministry of Finance raised questions as to its compatibility, adding that the response of the CMO is "pending".

The report also refers to the stadium's capacity issue, saying that, in practice, the number of 12,600 seats that were originally envisaged "was unattainable", as the seats had not been shown in design in the study, based on international standards and guidelines in relation to spectator comfort. It is noted that the final number of seats amounted to 10,700 and that the EY audit “showed that the actions taken on this matter will have a continuous impact on the revenue/tax collections from the state, due to the reduction of seats by 1,900 and the therefore reduced attendance of spectators”. The Service states that it considers this "action/negligence", as "highly unacceptable".

For this matter, EY recommends that the CMO proceed with a review of the studies and documents, to correctly calculate the cost estimate and construction time of the project, to examine the most correct, under the circumstances, method of implementing the project and to make sure of the his ability to manage and complete the project.

The report also refers to the tenders for the "Creation of a Central Register of Fan Card Holders" and for the "Supply of Computers for the needs of the Philathlou Card".

It is noted that it was found that "healthy competition did not develop" for the purchase of software and technological equipment for the creation of a Central Register of Fan Card Holders, with a duration of 12+12 months, after only one offer was submitted in which the tender was finally awarded, while the provisions of the procedure of the article of the Law had not been followed, according to ΄ invocation of which the tender was made.

It is also stated that, due to the delay in announcing a new tender for a complete solution after the cancellation in 2017 of the first tender for the object in question, the Organization concluded the above contract with summary procedures, which it renews until the completion and implementation of the contract of the new tender. The new tender was announced and finally awarded in October 2022 for the amount of €299,000, however the completion of the required infrastructure and the implementation of the new contract is expected, as informed by the Agency, to start in July 2023, it added. The Service reports that in November 2022, the Agency's DG informed them that their observations were taken into account and that the Agency's permanent position is as it applies the framework of public tender procedures.

Read also: Lack of rationalization in the field of public education