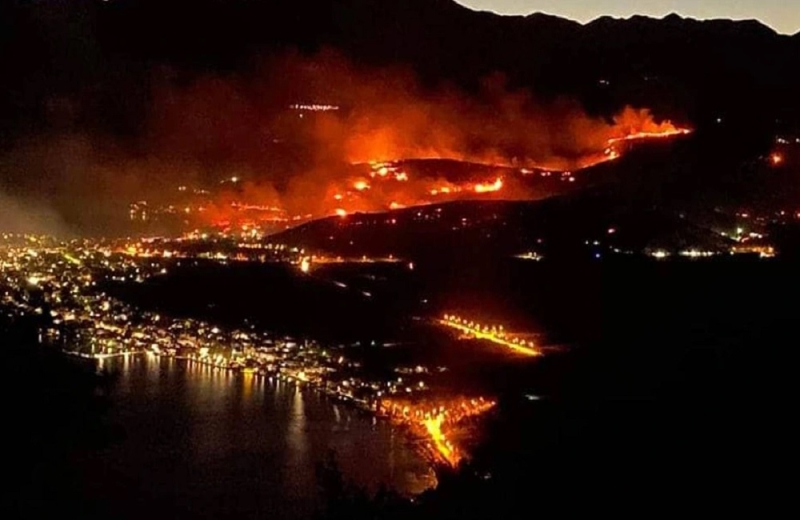 All night battle with the ground forces of the Fire Department are fighting the flames, with the situation being difficult in Fokida, Argolis and Ilia. Late on Monday night, the evacuation of North Itea by its residents was completed. With buses provided by the Municipality and the Region, the residents of the area were taken to hotels in Delphi where they will stay tonight for security reasons.

In Itea, where the fire has great momentum and intensity due to the weather conditions, two teams of the Fire Brigade (east and west) are working, while there are vehicles in Eleonas as well. Neither Itea nor any other settlement is threatened. The wind has dropped and the fire brigade will work through the night to contain it – as much as possible – and at first light the aerials will begin, according to the schedule given earlier.

Shortly before midnight on Monday, the meeting of the coordinating body that took place in ‘Amfissa to assess the situation and set the priorities for night operations was completed.

Firefighters and everyone involved in extinguishing the fire will try to keep the flames away throughout the night so that there are no flare-ups, and from what emerges from the coordinator's decision, the areas on which they will put their main weight are in the northwestern part of Itea where the flames are directed, but without endangering homes. Still, the main burden will fall on the areas of Agia Efthymia, Tritaia, Sernikaki, Chrissos and Eleonas. These are the areas that have critical fronts without endangering homes.

In addition to the preventive evacuation of the northern part of Itea, that is, that which is above the national road of Itea – Nafpaktos traffic is prohibited from the 57th kilometer to the 64th kilometer on the road ‘Amfissa – Livadia as the situation is particularly dangerous from the fronts of the fire and the smoke. It also became known that a request has been forwarded to declare DE Itea, ‘Amfissa and Delphi of the municipality of Delphi in a state of emergency. Throughout the night an effort will be made to hold the fronts of the fire until the first light of day when the aerial means are expected to return again, especially reinforced, to be able to limit the fronts.

It is typical that other forces from Central Greece and neighboring laws are already being transferred to the area, while large forces of volunteers have gathered since the afternoon and are helping to contain the fire. The farmers of the area are also fighting with whatever means they have at their disposal, simultaneously opening boreholes to stop the destructive course of the fire.

Due to the withdrawal of aerial vehicles, the task of extinguishing the fires is difficult, while the fear of rekindling remains, with the winds being strong.

At the same time, greatly increased – according to the special map issued by the Fire Department – the fire danger for Tuesday is displayed.

The picture from the big fires

The strong winds that blew from midday in Amfissa and the wider area, exceeding 6 Beaufort, made the work of the fire brigade very difficult.

The fire still remains at a distance from the settlement while there are still fears of its extension mainly to professional facilities but also sheepfolds.

With the departure of the aerial means, the 3 fronts of the fire continue their destructive path with the olive grove of Amfissa suffering terrible damage. The ground forces that have been reinforced recently are trying to regroup to deal with the flames at critical points such as the front towards Itea and the front towards Sernikaki and Chrissos which has been in a recession for the last hour.

Firefighting forces from all over Central Greece are already being transferred to the area and by decision of the Fire Headquarters, all the forces of Central Greece have been put on alert. Already at this moment, more than 150 firefighters with 48 vehicles and 4 groups of pedestrian departments are operating, while the “Olympus” mobile operational center is also in the area. 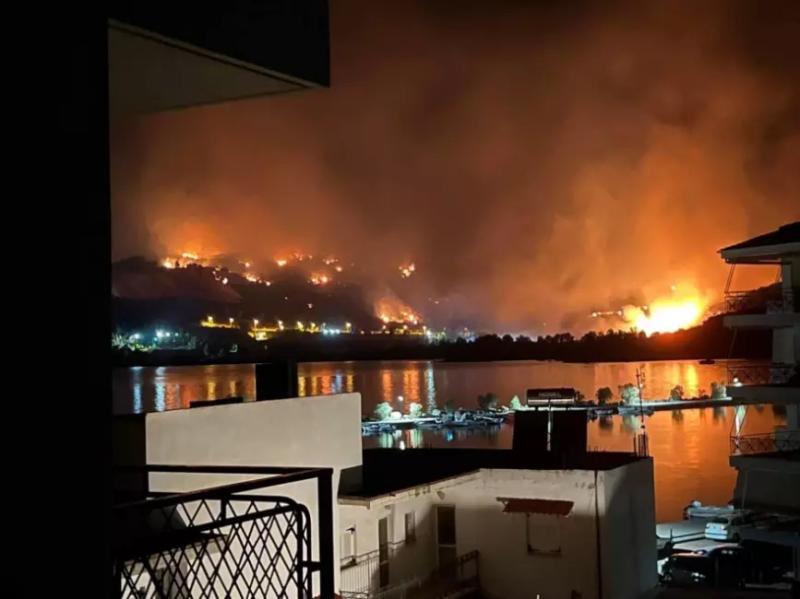 It is characteristic that 11 aircraft and 7 helicopters operated until darkness fell. Two of them were provided by the Greek Army while there was also a Fire Brigade helicopter for aerial coordination. At the same time, dozens of machines have been made available by the local government and water tankers, as well as volunteer firefighters have been found in the area, while by order of the chief of the Fire Brigade, a team of the National Fire Brigade is in the area where the fire is developing to investigate the causes for its start.

The green light for the evacuation of the northern side of Itea was given, in the afternoon, by the General Secretariat of Civil Protection and already ELAS patrol cars, but also firefighters are trying to evacuate the residents together with the municipal authority, as the front of fire is threateningly approaching.

Even the village of Sernikaki was evacuated. 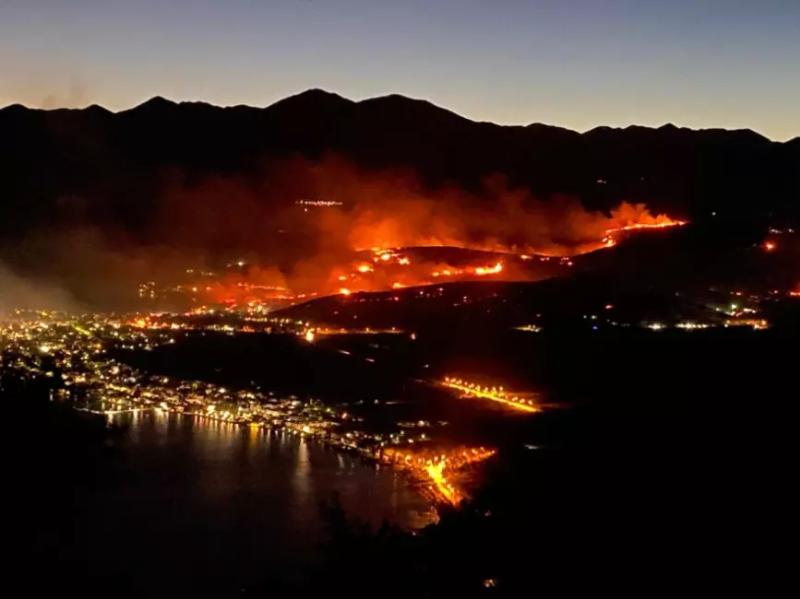 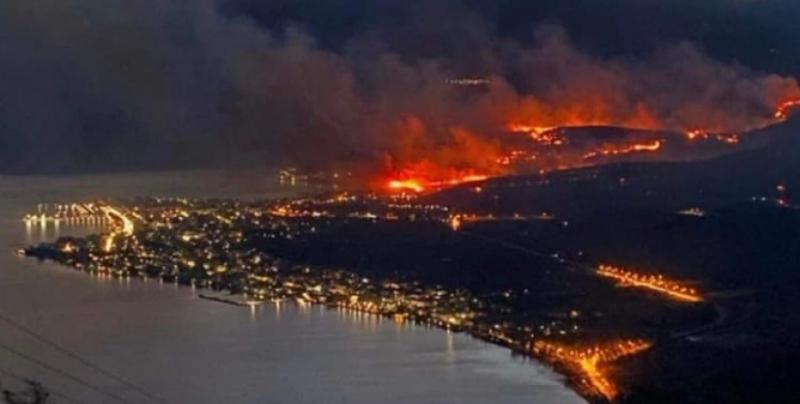 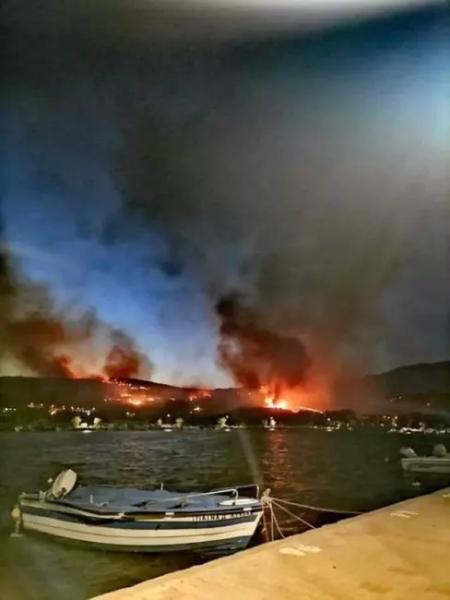 140 firefighters with 4 groups of hikers, 43 vehicles as well as the mobile operations center “Olympus” are working on the fire in Fokida. By order of the Chief of the PS, an echelon of the D.A.E.E. is in the area of ​​the fire to investigate its causes.

A strong front of fire is moving north towards the side where the women's monastery of the prophet Elias is, which was evacuated as a precaution by the eight nuns. The strong forces are trying to hold back the front so that it does not advance towards the monastery and from there into the forest area.

The other front is moving through Eleonas and is the most destructive, while the terrestrial means are trying to contain it.

Agony for the Argolis

Anxiety the fire that has broken out in Kranidi Argolida is also inspiring, with the flames reaching the luxurious Amanzoe hotel, causing extensive damage.

The residents were immediately ordered to be evacuated from the hotel and taken to the beach.

The fire earlier had reached uncontrollable proportions, but now its picture is better. There are small scattered outbreaks.

The fire had started north of the complex at a very close distance and had passed through the northern pine side to the outhouses. The fire engines were there, the trees between the houses were burnt and it spread south.

The fire brigade is now working south and the picture now from the fire brigade working on the scene is quite good. The same area had burned in 2016 and had re-ignited. 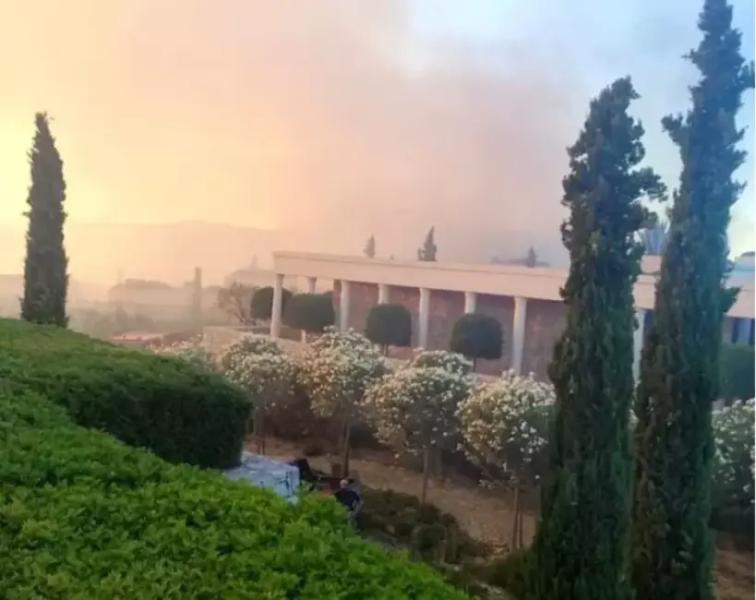 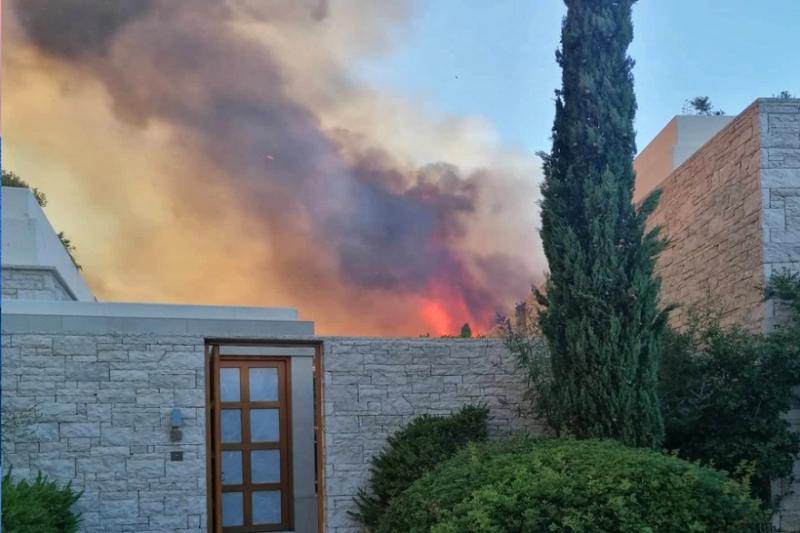 In Valmi Ilia, at around 6 pm, a message was sent from 112 to the residents of the village of Lata to evacuate to Ephyra.

The fire brigade continues to operate, as the winds blowing in the area favor the creation of of new small fronts in places that have not burned around Valmi.

Fire now in a forest area on Mount Athos

The picture is also better of the fire that broke out in the afternoon in a wooded area on Mount Athos, in the area of ​​Akrotiri Arapi.

46 firefighters with 3 groups of pedestrian units and 16 vehicles are working at the scene, while earlier we joined the extinguishing helicopter .

The area is inaccessible, close to where the fire broke out on June 24. According to the Fire Service, no monasteries are threatened.

Fire in a forest area in Kambi Zakynthos

The large fire that broke out on Monday afternoon in a forest area in the Kambi area of ​​Zakynthos is under control.

From the first minutes of the fire, the Police Department of Zakynthos immediately removed all bathers from the nearby areas of Limniona and Porto Roxas while traffic in the wider area was prohibited. The residents who live in the first houses of the village of Kambi were also evacuated.

Strong firefighting forces will remain at the scene throughout the night under the risk of rekindling.

Fire in low vegetation. in Aspropyrgos

A fire is raging in Aspropyrgos in the peripheral Egaleo. According to the Fire Department, the fire does not inspire concern as it burns in low vegetation.

14 firefighters with seven vehicles have rushed to the scene.

52 forest fires have broken out across the country today by 6:00 pm. Most of them were brought under control in a short time, despite the multiple fronts that the Fire Brigade had to deal with throughout Greece.

The fires in Achaia, Zakynthos, Mount Athos, Schimatari, Ilia and in Araxos they have been demarcated and controlled. In Kranidi the picture is good and it is estimated that it will be checked during the night.

On the Phocis fire which started from Eleonas from properties that had not been cleared near Sernikaki, there is an active front west to Itea and forces have been deployed to all sides. The wind has dropped and it is estimated that by morning the situation will improve.

By the last daylight, 5 CL215s, 4 CL415s, one PZL, 7 Air Tractors, 5 Ericksons, one BK117 and 2 CHINOOKs were operating from the air, and had completed 33 sorties. From vehicles, 35 water-borne firefighting vehicles, 15 auxiliaries, and the Operation and Control vehicle “Olympos” participated. 136 firefighting personnel also fought and are fighting the flames: 100 firefighters, a 7-person hiking group and two EMODE 29 forest commandos. From the OTAs, 15 water carriers and 4 project machines participated.

The ground forces of the Fire Department will continue to operate throughout the night and with the first light of day an enhanced aerial wave will be launched, to control and deal with what arises with all available forces.

Earlier a precautionary warning had been given. evacuation with 112, without endangering houses, from the north side of Itea to the side of Kirra (east of Itea), in order to avoid problems from the smoke carried by the strong winds.

*Increased risk for fires and tomorrow*

It is recalled that Civil Protection had rung the alarm bell throughout the country and with emergency updates from the Fire Department, as the degree of danger was at “4” today, as well as tomorrow Tuesday, due to of the combination of strong winds and high temperatures.

More specifically, according to the Risk Forecast Map for tomorrow Tuesday 5/7, there is a very high risk: In Attica & Kythira, Boeotia, central & southern Evia, Lesvos, Chios, Samos & Ikaria and in Argolis, Corinth, Achaia, Ilia & Laconia and high risk in many other areas of the country.