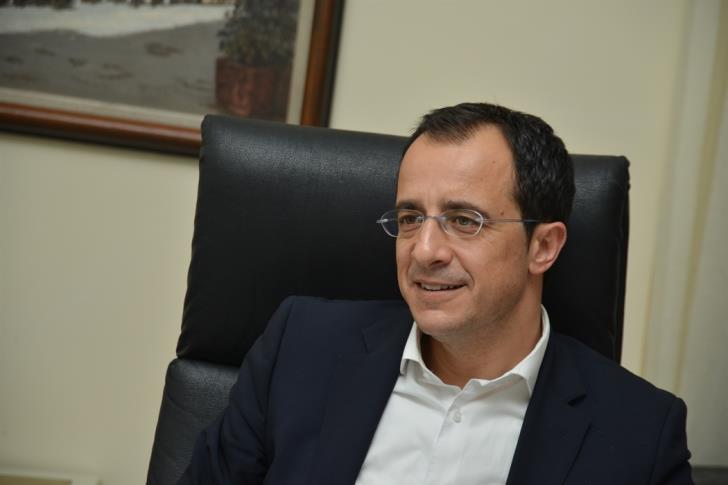 On Wednesday night, returning to the capital from a series of meetings he had in various areas, Nikos Christodoulidis informed his associates that the next day they would proceed with the formalization of his presidential candidacy with a & nbsp; announcement. Although they had been preparing for days now, the study he showed was somewhat surprising. It was not a political situation that would have favored him. On the contrary, the political data in the previous days helped to keep it for a few more days as the attention was elsewhere. & Nbsp;

A decisive development in this move of Nikos Christodoulidis was the messages of the citizens and especially of the ordinary people who in every meeting with him the question they asked in the dialogue between them asked when he would announce. People just do not understand much about political timing or tactical moves. & Nbsp;

Throughout this period, Nikos Christodoulidis had walked among ordinary citizens and organized groups, talking to them on an equal footing. Listen, record and talk to them. Of course now he has to convince, and that will be the difficult part, because he chose a different path and not the trampled one. He himself stated in his first public statements (RIK) that there is “no paradox in the independent candidacy”. & Nbsp;

Both he and his staff had known for a long time that an attempt would be made, mainly by Pindaros, to challenge the “independent candidacy of Nikos Christodoulidis”. The main effort of the leadership of the Democratic Alarm is to pass the message that N. Christodoulidis is a candidate in the intermediate space but also that “he represents the rejection front”. & Nbsp;

This move, which is primarily aimed at the party patriotism of the Alarms, has many vulnerabilities. And more importantly, the DISY voters, whether they support the president of their party or & nbsp; Nikos Christodoulidis, know very well the cooperation of Averof Neophytou and Nikola Papadopoulos in a host of issues within the Parliament. & Nbsp;

< b> & gt; & gt; The Cypriot: In the staff of Nikos Christodoulidis it is not considered a coincidence that both the first comments and the questions seemed to move in the direction of the Cyprus problem, at a time when no one – either a candidate or a party – is discussing the national issue. This is estimated to have to do with the effort of specific political areas that will want to put the label of “rejector” on the candidate. & Nbsp;

That is why, announcing his candidacy, he made sure to record his basic position on the national issue: EU acquis, a homeland without the Turkish barbed wire of division, without foreign troops and foreign guarantors, which will play the role it deserves and deserves at regional and European level. The current state of affairs, the unacceptable and illegal status quo, can not be the solution to the Cyprus problem, neither the division, nor the confederation, nor the sovereign equality of two entities, nor the two states. & nbsp; We have a duty to make every effort to effectively restore the unity of our homeland, its territory, its people and its institutions in a bi-zonal, bi-communal and democratic federal state, where the human rights and security of all Cypriots will be are fully respected by Greek Cypriots, Turkish Cypriots, Maronites, Armenians and Latins. “

The 144 words about the Cyprus issue are, as we were told by associates of Nikos Christodoulidis, more than what was said by other candidates during their own announcement. Noting at the same time with meaning that through the very first position the candidate clarifies the form of the solution he supports. Responding to those who had predicted that he would avoid reports in order not to upset future supporters. & Nbsp;

& gt; & gt; The parties: During his announcement, N. Christodoulidis clarified that “these elections are not a battle of factions and parties, they are not parliamentary elections after all”. This will be another difficult test that he will have to face as he will try in the next period to present himself as a person who turns against the parties. On the other hand, he and his associates know that he will have to face the organized effort, mainly by the leadership of the Democratic Alarm, for “party plans” by N. Christodoulidis. & Nbsp;

Thus, in the previous period, they had skillfully taken care from Pindarou to channel to friendly media and journalists the narrative that N. Christodoulidis has in the back of his mind the creation of a political group. That is, it is working on the dissolution of those parties that may support it the day after tomorrow. Intentional leakage to cause fear and anxiety in certain political areas. & Nbsp;

In his statement last Thursday, N. Christodoulidis clarified that: “I am not interested, nor am I going to found a party”. In Pindarou – as recorded in a message that left a few minutes after the announcement to executives and members of the party – they claim that “in the announcement it is clear that N. Christodoulidis is trying to bring DIKO closer with his statement not to form a party”. & Nbsp ;

& gt; & gt; Pindar Tips: In the same message to its executives, the Alarm Leadership claimed that “at no point in the 30-minute speech did we hear any proposal for tomorrow's Cyprus, only wishes and slogans.” And seizing the opportunity that there was a certain number of people in the film, the Alarm Leadership states that “the announcement in no way had the response they said it would have, a fact that shows that the candidacy of N. Christodoulidis is not framed by enough people”. & Nbsp;

Nikos Christodoulidis, now a candidate for the 2023 presidential elections, having recorded the main axes of his positions, continues his dialogue on another level. It will move, as his associates tell us, in two directions:

& gt; On the one hand it will continue contacts with people and organized ensembles and,

& gt; On the other hand, his dialogue with the political forces will be formalized. & Nbsp;

What he considers as a powerful weapon, his independent candidacy, N. Christodoulidis will try to preserve it in the future as well. Party mechanisms are a valuable tool for any candidate, but at the same time they can be a burden if not properly managed. & Nbsp; wants to voluntarily help the effort without seeking any reward. Unselfishly and unselfishly, they want to help what they see as a common effort and common goal. And this is shown by the fact that it has managed to gather people of different political shades and coming from different party spaces.

Source: www.philenews.com
Share
Facebook
Twitter
Pinterest
WhatsApp
Linkedin
Telegram
Previous articleThe power of will has its own face and it is that of Victoria from Ecuador
Next articleAverof Neophytou analyzed his vision for rural development in Platres
- Advertisement -

Sharon Stone's Revelation: “I Lost Nine Children by Miscarriage – Not...