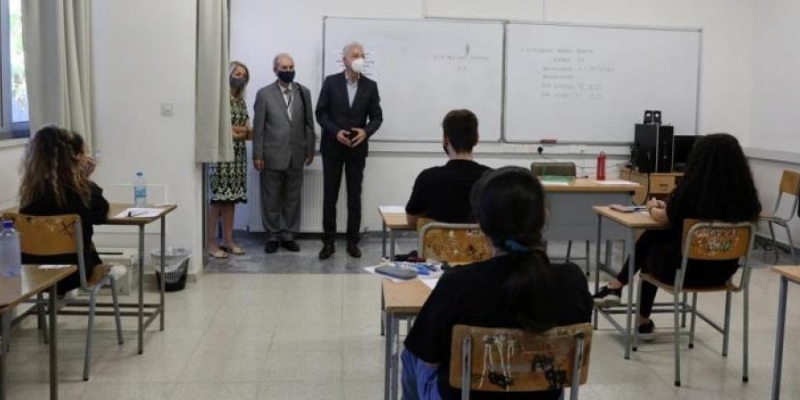 Organized parents are preparing to send a letter on the issue of the preparation process for the four-month subjects, after the new complaint about a possible leak, which the Ministry of Education is investigating for the writing of the New Greeks of B’ High School, Loizos Constantinou, President of the All-Cypriot Confederation of Associations of Parents of Public Secondary Schools, told KYPE.

The parent made the new complaint to the Ministry three days ago, as there was information from a private school from the day before the exam about the topic of the report and other topics of the exam, which were eventually included in the written paper, he noted.

«Now if they made an estimate and were 100% accurate, we can't know. It wasn't like the other case where he was yelling that it was a leak. But on the other hand, it is suspicious, so the Ministry must investigate it”, said Mr. Constantinou, adding that if it was not a leak, then it is a very big coincidence.

Touching upon the issue of the process of preparing the issues, Mr. Constantinou stated that the specific case “was not a leak from a school that same morning.” If there was a leak, it would have been from a theme organizer, because the themes are prepared a month in advance. Instead of applying the system of the Pancypriots, they apply their own system: the depositors exchange emails with each other and four weeks to a month before, the writing is there».

Why’ this, he said, a letter will be sent by the Confederation to the Ministry of Education, with which it will be requested for uniform all-Cyprus exams to apply “the tested and successful method of the Examination Service of the Ministry which conducts all-Cypriot exams for access and admission to the universities of Cyprus and Greece. It is a tried and tested system, both in terms of the depositors and how the papers are sent and how the proofreading is done. If the system exists and is tested, why is something else implemented?», he asked.

Besides, he reported to KYPE that on Friday the Confederation sent another letter to the Ministry, on the subject of the degree of difficulty of the examination essay of Mathematics of Grade C’ Lyceum. "From our research, (the subject for) Mathematics of C’ High school documented was more than unacceptable. We did our research in all the schools, spoke to the top students to see what they did. Some of the best ones didn't even get to solve it. It started checking with expert teachers who took the test to see how much time they want to solve it. It was a paper which was impossible to solve in terms of time, but also the degree of difficulty was enormous, he said.

Mr. Constantinou noted that the philosophy of the four months and the instructions given by the Ministry was that the degree of difficulty should not be so high, as the aim is not to identify the 1-2% who can write. “It wasn't out of context, but it was out of context,” he clarified, adding that “we can't play with students' diplomas.” And since the Ministry's instructions were not those, it is good to stop absorbing the accusations in general. and to assign the responsibilities where they should, he noted.

The process of appointing an Audit Committee begins , on the issue of the leaking of the subjects of the examination essay of the New Greeks, in the context of the four-month examinations, according to information from the Ministry of Education.

"They will look at the school's regulations and any violations. According to the law, specific penalties are also provided. “Possibly, then, criminal prosecution can be instituted”, the same source in the Ministry of Education told KYPE.

Source: www.sigmalive.com
Share
Facebook
Twitter
Pinterest
WhatsApp
Linkedin
Telegram
Previous article
Croats and Serbs planned to attack a police station in Nicosia (VID)
Next article
In the streets, the residents of Alaminos-Fonazan are calling for the transfer of a poultry farm to the area
- Advertisement -