PD: Priority is the national strategy for shipping 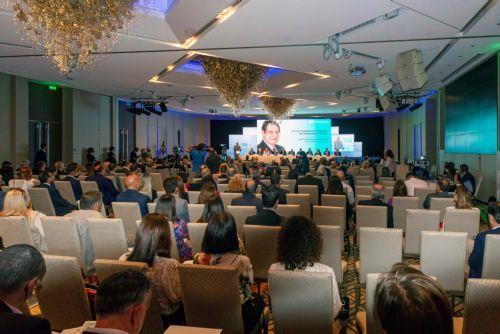 In a greeting read by the Deputy Minister of Shipping, Vassilis Dimitriadis, President Anastasiadis expressed his optimism for the course of the economy, which coming out of a prolonged period of uncertainty due to the pandemic, proved to be resilient, as he said, with its growth rates. estimated at around 4% for 2022, according to the latest European Commission forecasts.

“In such a difficult year – with an ever-changing landscape of rules and regulations – I could not be “proud of the performance of the Shipping Industry, its contribution to the Cypriot economy and its vital role in society during the pandemic”, he added.

& nbsp; It has never been clearer, he continued, how much shipping contributes to our country, while underlining “the tireless efforts of our sailors, who continued to deliver cargo to all over the world, including Cyprus, something we once again recognize and appreciate Recalling the economic contribution of shipping to the country, President Anastasiadis stressed that the Government is well aware that, through shipping, & nbsp; Cyprus is distinguished and holds a remarkable international position, much higher by its size and limits.

In addition, he underlined the role of the Cyprus Maritime Chamber, which has been serving the Cypriot Shipping since 1989 “and should be proud to have taken on an important professional body with an active involvement in shaping government shipping policy and contributing to its development. of the Cyprus register and the domestic shipping industry “.

In his speech, the President of the Republic also referred to the contribution and actions of the Ministry of Shipping, which in 2021 presented its comprehensive long-term strategy for shipping “Sea Change 2030”, with 35 different actions aimed at sustainable development. of Cypriot shipping.

Assuring that the implementation of the national strategy for shipping is one of the most important priorities of the Government, President Anastasiadis said that the aim is for our shipping to be one step ahead of the competition, both as an international register and as a basis. for international shipping activities. & nbsp;

In this direction, he added, the Ministry of Shipping has already announced a tender for its digital transformation, “a project that is expected to maximize its operational efficiency.” In addition, he added, the Government, in an effort to further increase the efficiency and attractiveness of the Cyprus register, will submit a bill to the House of Representatives, & nbsp; to adopt a regulatory and administrative framework regarding the establishment of a shipping company./p>

At the same time, the PTA stressed that, as a leading shipping state, we have a responsibility to accelerate the transition process of shipping to a low carbon and climate sustainable industry. “Obviously we need a coordinated approach to targeted international measures that should always be formulated in close consultation with the shipping industry,” he said, adding that such a course of action would allow us to achieve our emission reduction targets. while ensuring a sustainable future for the shipping industry. “

President Anastasiadis also described the Cypriot shipping “thorn in the side” of the ongoing illegal Turkish embargo, assuring that the Government is constantly intensifying its efforts to remove “this clear violation of international and European laws, which impedes the free trade the interests, not only of the Cypriot, but also of the European shipping “.

Referring to the crisis caused by the war in Ukraine, he noted that the sanctions imposed on Russia have a serious impact on international trade and especially on many Russian and Ukrainian sailors who employ shipping companies based in Cyprus. & nbsp; Saying that the Cypriot Government is ready to offer all possible assistance needed to facilitate the shipping industry and protect the affected seafarers, he cited as an example the decision to facilitate the opening of bank accounts, in cooperation with financial institutions, for seafarers and their families, who do not have access to their salaries.

Finally, expressing his appreciation to the Cyprus Maritime Chamber, President Anastasiadis also expressed the belief that, “all together, we will continue to work hard for our goal, which is not only to maintain Cyprus as a world-class international shipping center , but to further develop and upgrade the Cypriot shipping “.

Shipping is a sector that can play an important role in ensuring sustainable development, said in her greeting the Speaker of Parliament, Annita Dimitriou, expressing the full support of Parliament in industry.

She also assured that as a young politician and the first woman Speaker of the House of Representatives, she remains committed to supporting the goals of the “Sea Change 20230” strategy of the Ministry of Shipping and which relate to a changing climate, where shipping is linked. with civil society, through lifelong learning, the promotion of a maritime culture especially among young people and equality in the maritime and maritime professions.

Recalling the start of the Cyprus-Greece sea passenger connection, after 22 years, Annita Dimitriou said that it is expected to contribute to increasing connectivity, which is a top priority for Cyprus.

He further added that “the House of Representatives and its relevant Committees regularly address issues related to shipping, including sustainability and the protection of the marine environment”, noting that “in light of current challenges, including climate change Shipping is an area that can play a central role in ensuring sustainable development. “

In these times of international turmoil and significant economic challenges, he continued, the role of shipping in strengthening the economy and promoting prosperity in our region has become even more important, emphasizing that initiatives and actions taken collectively for shipping , is vital and must be fully supported.

Moreover, the Chairman of the Board of the Chamber, Themis Papadopoulos, He emphasized that in the wake of a prolonged difficult period, the Cypriot shipping industry had remained resilient and continued to offer its services vital to humanity.

stop shipping center) at the State Ministry of Shipping, which will be, according to its expression, a driving force for the further upgrade of Cyprus, to a modern, which It also referred to the efforts of the Cypriot shipping industry to achieve the objectives set for further reducing the environmental footprint of global shipping, in an efficient and safe manner, need to lift the Turkish embargo on Cypriot-flagged ships.

Source: www.philenews.com
Share
Facebook
Twitter
Pinterest
WhatsApp
Linkedin
Telegram
Previous article
The Appellate Prosecutor is appealing against the decision for the fire in Mati
Next article
Athalassa Forest Gardens: The magic of nature in the center of Nicosia unfolds on 4.5 hectares of land and is worth visiting (video-photo)
- Advertisement -