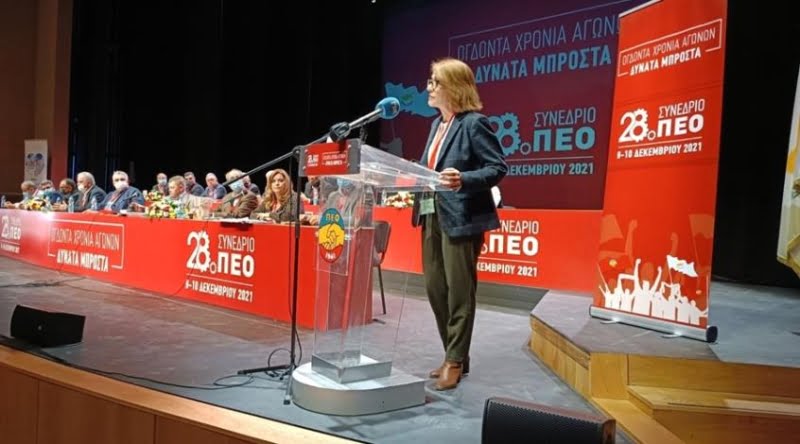 He expressed the need to take specific decisions and measures to change the data in the field of Safety and Health at work for the better, “so that we don't mourn victims, so that we don't come with retrospective analyzes and reports of what went wrong”, he expressed the CEO of PEO Sotiroula Charalambous in her speech at the event organized by PEO on Wednesday afternoon on the occasion of the European Week for Safety and Health, under the motto “Employees' lives above profits”.< /p>

According to a statement by PEO, the participants of the event, after expressing “their strong concerns about the negative progress in the field of Safety and Health at work”, approved a memorandum for the Minister of Labor and Social Insurance Kyriakos Kousios in which they state that “there is insufficient prevention and supervision on behalf of employers and the state for the implementation of the relevant legislation” and request the adoption of specific measures.

Also, to introduce the obligation to possess   certificates of compliance in matters of Safety and Health for those companies applying for public tenders or public sponsorships, to staff the Labor Inspection Department, to promote measures to make the investigation procedures for occupational accidents more transparent and to abolish the fees charged by the Department to employees, for granting the report of the investigation of a work accident.

Regarding worker heat stress and work in conditions of high dust levels, the participants in the PEO event believe that much more specific measures should be promoted, including compulsory work stoppages without loss of wages, if working conditions impose.

In her speech, the CEO of PEO said that from 2013-2017 the frequency index of occupational accidents increased by 27.3% and added that “accidents in labor-intensive sectors such as food sector and construction”.

“The economic miracle that some say has been achieved in addition to being based on lowering wages to make labor cheaper, has also been at the expense of working with Health and Safety,” he added.

Ms Charalambous said that “the neoliberal policies that prevailed in recent years almost all over the world and especially the policies that were implemented to deal with the financial crisis of 2008, which were mainly aimed at reducing labor costs through deregulation of work, among the many negative effects they had on the world of work, they also had a negative effect on the field of Safety and Health”. name profit at any cost, even if the price is human life itself,” he added.

He said that investments in equipment to protect workers from accidents, taking measures for safety and health are considered “unnecessary expenses”. lead to an intensification of work which in turn leads to more accidents, while at the same time the extensive layoffs of specialized personnel, again with the aim of reducing labor costs and replacing them with cheap unskilled personnel, mainly immigrants, without giving them the appropriate education, increases the dangerousness of the job.

Stating that a good legislative framework is not enough to guarantee this basic right to work, the PEO General Secretary said that practical measures are needed in the field and “first, employers need to take responsibility, in practice, by investing in Safety and Health equipment and at the same time assuming full political responsibility for monitoring and enforcing compliance with Health and Safety laws and regulations”.

“If someone looks at the reports made on work accidents, they will see that the vast majority of accidents happened because the employer did not take the appropriate protective measures as he should”, he said and added that, based on the Law, there must be Safety and Health committees, or a Safety Officer at each workplace.

Ms Charalambous said that of the 115,000 premises that under the Act must be inspected for the purposes of compliance with the Safety and Health Act in the Inspection Department's registration system Labor (T.E.E.) there are 43,000 and “of these 43,000 only in 546 places there are declared Safety Committees”.

“Let today's event be a day of remembrance for all our colleagues in Cyprus and abroad who lost their lives or were injured in the struggle for the living wage”, but “also an expression of our determination to continue the struggle claiming the right of every worker to return to his home to his family healthy and fit”, he concluded.

Source: www.reporter.com.cy
Share
Facebook
Twitter
Pinterest
WhatsApp
Linkedin
Telegram
Previous article
Equality nurses are calling out – “The need to recruit staff is urgent”
Next article
The Police are looking for them for theft in Kofinou (PHOTO)
- Advertisement -