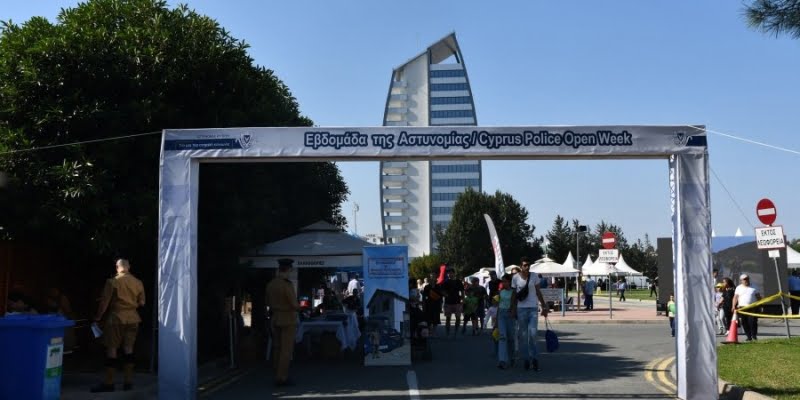 With the aim of better familiarizing the public with the work and role of the Police, the Police Week started on Sunday at the Traffic Training Park in Nicosia. The goal, according to the Chief of the Police, Stelios Papatheodorou, is to communicate with citizens, young and old, and for the public to get to know "several aspects of the operation and mission of the Police, which certainly reflect the important and multifaceted work we carry out" ;.

Crowds of people and mainly children visited the Traffic Training Park on Sunday to see up close Police vehicles, boats and helicopters, demonstrations with police dogs and to learn more about the Force's action.

The “Police Week” event ended a while ago with great success. in the Traffic Training Park. The park was flooded with people. From tomorrow, Monday 07/11 until Friday 11/11, the space will be open only for schools with scheduled appointments. pic.twitter.com/8I7vZqPGk7

"Knowing us, you know the services we offer, which work for the safety, service and well-being of our fellow citizens," said Mr. Papatheodorou, in his greeting during the ceremony for the start of the Week.  The Cyprus Police, he added, "is one of the largest public organizations" with 24 different Services/Departments/Units/Divisions, with Cyprus-wide infrastructures covering the entire range of tasks of a National Police.

"Respecting the religion, national origin, language, diversity and diversity of all our fellow citizens. We try to act humanely, fairly and impartially, respecting and defending the essential rights and individual freedoms of our fellow human beings without exclusions and exceptions,” he said.

Referring to the relationship between society and the Police, he said that "a safe society is everyone's shared responsibility» and that they ask society and citizens to become “essential partners and allies of the Police”.

Mr. Papatheodorou also referred to the foreign policy of the Police, which, he said, is based on the fight against terrorism and radicalization, on dealing with serious and organized crime, on improving the level of road safety, on effective border policing and on the regulation of issues of irregular immigration.

“Terrorism, corruption, drug trafficking, organized crime are harmful globalized threats, with the pace of change in these threats faster than ever before,” he said, adding that when the threats are global, the response cannot be local but synergy of all states at the international level.

He also noted that they also place "special emphasis" in internal matters, with the aim of promoting the issues of welfare and improving the working conditions of the members of the Force.

He referred to the recent upgrading of Police ranks up to and including the rank of Senior Constable and Special Police Officers, from which, he said, 4,000 Policemen are benefiting. He said that they have progressed, in parallel, in the construction and/or renovation of Police Stations, while, "our major goal is the construction of a new Police Headquarters which will house all the Services of the Headquarters and the Nicosia Police Department».

Among other things, Mr. Papatheodorou mentioned that the Force developed technologically, upgraded its fleet and equipment, and invested in strengthening relations and strengthening partnerships with services, authorities and agencies at the local and international level.

Mr. Papatheodorou said that the Cyprus Police is by its mission intertwined with the enforcement of the Law, but at the same time, it is "a human-centered organization with a very large humanitarian contribution".

He noted that precisely because of the nature of our duties, they experience many times from very close, "problems and difficulties of our fellow human beings, which could not leave us unaffected and unmoved". He said that all over the world police personnel put their lives at risk to help people. And that also in Cyprus, "the vast majority of our members are distinguished by self-sacrifice, conscientiousness, social sensitivity". In closing,  gave the assurance that the human-centered  approach «is what defines our philosophy and is an integral part of policy and practice  us».

In her own greeting, the Minister of Justice and Public Order, Stefi Drakou, said that through the Week  this Police will have the opportunity to "show its human face", as in the perception of citizens, especially young people, a stricter image of the Police usually prevails "since it is the authority called upon to enforce the law and maintain order and security'.

He added that this is a service that is next to the citizen 24 hours a day, and, where, "when our fellow citizens need help on the street, at home, or anywhere else it will be there immediately".

"And that is what we want to achieve. The citizen should feel the Police close to him, as his supporter and fellow traveler, but the Police itself should win each citizen, as its partner, he said.

In the context of this goal, he added, they have proceeded with the implementation of other institutions, such as the Neighborhood Police, as well as the Bicycle Police, while soon, as he said, they are proceeding with the trial operation of a new institution, the local councils in which representatives of schools, local authorities, civil society, among others, have the possibility to participate at the local level. He noted that they constitute "another policy of citizen cooperation with the institutions of crime prevention, in the context of promoting and deepening the participatory society".

Mrs. Drakou said that they do not stop here, however, as the Ministry of Justice and the Cyprus Police are moving “rapidly” with the reorganization of the House, recognizing, as he said, the ever-changing demands and difficulties faced by every citizen, but also the new forms of crime that the police must deal with.

The reorganization aims to modernize the Police and make it ready to meet its increased operational tasks. “With our main concern, to simultaneously strengthen the communication between the Police and citizens”, he said, adding that the first phase of the reorganization aims to improve the contact of the members of the corps who are on the front line, with the citizens, through new best practices and approaches.

A road safety song orchestrated by members of the Police Philharmonic was also presented, along with a dance performance by students of the Olario Dance School.

During the event, citizens, and especially children, had the opportunity to see up close and learn as well as get inside a Police patrol vehicle, a Coastal and Maritime Police vessel, and ‘Jason’, one of its helicopters Strength. Another helicopter, ‘Achilleas’, gave a demonstration flying over the area of ​​the Traffic Training Park.

At the event, which is open to the public on Sunday, there were also demonstrations by the Police Dogs and Fireworks of the Force, while the music program of the Philharmonic. The program also includes children's activities, such as face painting, a stilt walk and a magic program with jugglers. of the event, and with the aim of raising citizens' awareness of road safety issues, an exhibition with photographs by the KYPE of fatal road collisions is also hosted. The photos, selected by the Headquarters Traffic Police and edited by the Orasis photography association, were provided by Stavros Koniotis, journalist and correspondent of KYPE in Limassol.

From Monday to Friday, the site will only be open for visits from schools. Mr. Papatheodorou mentioned that, in the coming days, approximately 650 Primary and Secondary Education students from 17 schools, in collaboration with the Ministry of Education, Sports and Youth, will have the opportunity to visit the sites.