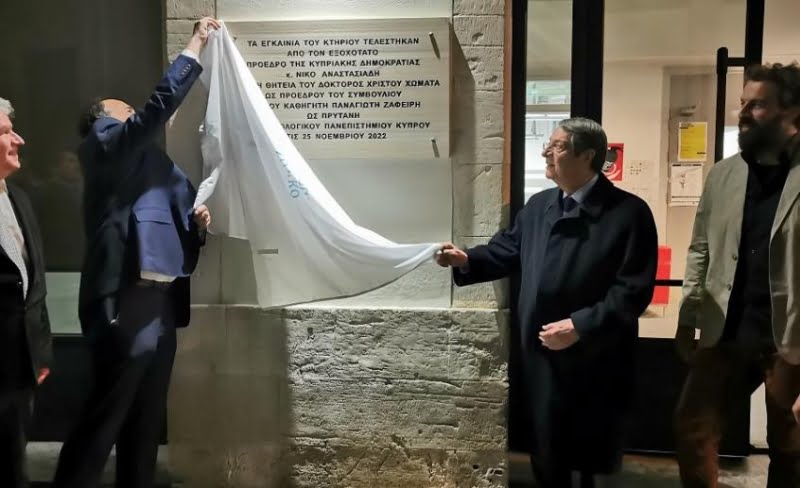 The introduction of the English language in the state universities is out of the blue, emphasized the President of the Republic Nikos Anastasiadis, celebrating the opening of the  laboratories of the Department of Fine Arts, new classrooms and the administration offices of TEPAK, in Limassol.

In his greeting at the opening ceremony, President Anastasiades also referred to the great interest that the current Government has shown and will continue to show until its last day in power, for Education and for the further upgrading of TEPAK.

As he said, the budget of the projects he is launching has exceeded 5 million euros and he expressed the belief that these projects will contribute to increasing the quality of the education provided and improving the administrative services of TEPAK.

< p>He added that the first project concerns the creation of laboratories of the Department of Fine Arts of the University with a total cost of 2 million 700 thousand euros, underlining the great donation of the Leventis Foundation to this end.

The second project, he said, has a total budget of 3.1 million euros and concerns the renovation and reorganization of a two-story listed building, as well as the construction of a new three-story building. The renovated building, as he mentioned, mainly includes offices, while the new building includes six new classrooms.

The President of the Republic underlined the great interest that the Government has shown and will continue to show until the last day of handing over power, so that with the cooperation of the local governments and the rectory authorities “we can see how problems that, unfortunately, arise as a result either due to bureaucratic structures or due to a narrow perception of what is beneficial, due to a strict spirit or due to some inconsistent perceptions”, he said.

Referring to a meeting he had with the administration of TEPAK and the rector's authorities before the opening ceremony, the President of the Republic said that “I heard what I have passionately supported since 1991, that the English language is among those that must be introduced in universities because in this way it allows cooperation with other universities abroad. TEPAK has succeeded, through the action of the President and the Rector's Authorities, in general the administration, to have a cooperation at the European level with seven other universities”.

“And the Rector wonders and I honestly wonder too”, he continued, how is it possible to exchange programs when we insist that the only language you can speak is Greek? But the biggest question is, beyond the cooperation with the rest of the universities: can you tell me, when we invest or when the headquarters of large companies are moved to Cyprus and they need TEPAK graduates, is English necessary or not? How will they get along? Shall we oblige giant companies to learn Greek so that they can communicate with our graduates, our scientists? Because the high level of the education provided cannot be ignored”.

He added that under these conditions it is impossible for even excellent scientists to work.

“I have been saying this since 1991 and despite the fact that I stood out for Greek-centric views. As then President of the Education Committee of the Parliament, I insisted that English was of necessity a language that should be taught and at the same time Greek lessons could be provided, in order to adapt the students to the terminology, so that they would not be alienated from the Greek language” , said the President.

Addressing the MPs present, he invited them to consider the issue as soon as possible for the progress of both the University of Cyprus and TEPAK, taking into account, as he said, the competition between private and state universities.

“We are not against private higher education, quite the opposite. But we should also give the supplies to the state universities”, noted the President, underlining that “I will take care in every way, as has always been my interest in TEPAK, so that before the handover of power, definitive decisions are also made about the Second Technique and for the old hospital, so that this problem can be overcome”.

Referring to Berengaria, the President of the Republic said that there is an amount in the state budget, adding, addressing the management of TEPAK that “if you go ahead with the studies either for the university campus or for the other facilities, sports, teaching, etc., then the new Government, with a supplementary budget, can easily cover whatever costs are foreseen”.

President Anastasiades also expressed his warm congratulations for the work carried out by TEPAK, which in just a few years has established itself at the highest levels of performance, expressing the belief that what he said “will reach the ears of the listeners and this 'disability' that is observed will not continue because it is a 'disability'. I am a graduate of a Greek university and I know the difficulties I faced during my postgraduate studies, but also the difficulties I would face if I did not pursue postgraduate studies in speaking English”.

He also mentioned the great interest from multinational companies in Cyprus, noting that knowledge of the English language would facilitate young scientists in the labor market.

He also emphasized that “without denying that it is the Greek language that contributed to science, nevertheless English is considered essential. And there is no problem that cannot be overcome.

Therefore, I appeal to the House of Representatives to move forward so that a backlog that has existed for years can be overcome.”

Finally, the President Anastasiades said that “I heard with interest about the new department of maritime science, it is something that was missing and will significantly contribute. Suffice it to say that Cyprus is 3rd in ship management in Europe and 11th worldwide. Therefore, it is an absolutely necessary educational service that will be offered to our young people and I am sure that the new Government, whoever it is, will be on the side of local education”.

Source: www.reporter.com.cy
Share
Facebook
Twitter
Pinterest
WhatsApp
Linkedin
Telegram
Previous article
She stabbed him after a fight… in the middle of the street. In the hospital a person
Next article
The Consumer Protection Service proceeded to withdraw products due to unsuitability
- Advertisement -