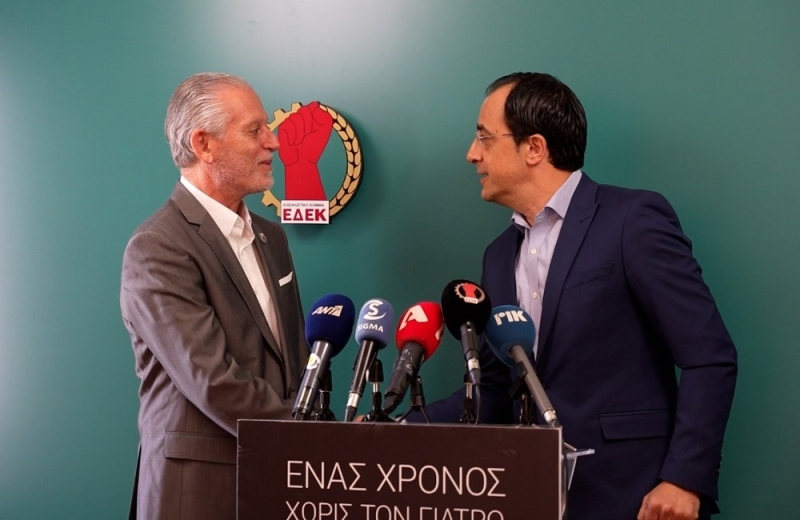 Despite the fact that meetings will formally take place with Mr. Averof and Mavroyiannis, the EDEK Secretariat has decided, without announcing it, that on July 13th during the party's conference it will support Mr. Nikos Christodoulidis. In fact, an agreement has been reached regarding cooperation. EDEK and Nikos Christodoulidis, as was the case with DIKO, agreed on process and communication issues in three pillars:

EDEK and Nikos Christodoulidis do not agree on much, however, if we judge from the last meeting of their staffs, this is not of particular concern. As Mr. Christodoulidis clarified, the support provided to him does not constitute absolute identification with him. Some parties or groups may vote for him, but at the same time they may maintain their disagreements.

The question, of course, and at the same time the fear that exists is whether there will eventually be Babylonia in the transmission of the candidate's messages in the context of the election campaign.

The reorganization of EDEK

EDEK is reorganizing and reorganizing on the way to the July 13 Congress, according to a member of its Political Bureau. This is made easier by the Christodoulidis pick, which, we're told, is “considered a win pick.” And this prospect alone will bring many distanced people close to the party, since in the event of a victory, there will be dozens of appointments to the ministerial, to independent positions, as well as the semi-state ones. The new Central Committee has already been established, a ten-member Political Bureau has been elected and five members constitute the Secretariat which manages the day-to-day affairs of the party. At the same time, the Citizens' Alliance (the former party of Giorgos Lillikas) is now functionally included, which ex officio will take a third position as vice-president of the party, with MP Andreas Apostolou being the dominant party. At the same time, the Citizens' Alliance will contribute 12 people to the Central Committee and 4 people to the Politburo.

EDEK does not seem to be worried, as we were told, by the recent conference of the dissenting Edekites, especially after the court decision. These people can at any time return if they wish or establish their own political formation.

On the other hand, Marinos Sizopoulos is selectively trying to approach some of these executives, such as the MP Ilias Myrianthous, for whom there are hopes that he will come down with the EDEK and the support of other parties for the City Hall Chrysochous.

Mr. Sizopoulos, however, does not hide his disappointment at the participation of Nicosia MP, Kostis Efstathiou, in the recent conference of the dissidents. As reported to Politis, Mr. Sizopoulos intended to propose to Mr. Efstathiou to stand as EDEK's candidate for the European Parliament in 2024. “Through his participation in this conference,” according to a member of the Politburo, “he has put himself outside party”.

Source: politis.com.cy
Share
Facebook
Twitter
Pinterest
WhatsApp
Linkedin
Telegram
Previous article
The children of the “missing” die and the grandchildren take over
Next article
The Ministry of Interior wants a… Polish-style fence on the green line
- Advertisement -