PTD for EastMed: Instead of air words, have suggestions 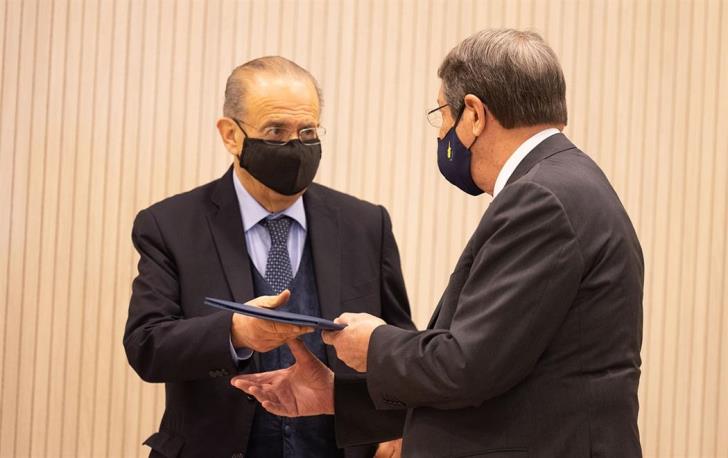 It is time for the opposition to be exercised on the basis of constructive criticism and not nihilism, said today the President of the Republic Nikos Anastasiadis when asked to comment on AKEL criticisms for the Government's handling of the Cyprus issue and other issues. Asked if he shared the position of Foreign Minister Ioannis Kasoulidis that “EastMed has always been a tool for causing problems”, the President said that “I do not think that is what Mr. Kasoulidis meant nor is it a matter of commenting on any personal views that some Mr. Kasoulidis expressed at that moment.

I am sure that his whole course is a source of inspiration for every European citizen, but also for every citizen who respects democratic principles and values. May his memory live forever”.

Asked about the forthcoming Security Council resolution, the President said: “I want to hope that the resolution reflects what has been received from the Secretary-General's report. “First, the basis for a solution to the Cyprus problem and second, the actions that must and must be taken, the initiatives that must and must be taken, in order to create those conditions that will allow us to return to a creative dialogue.”

Asked if he shared the position of Foreign Minister Ioannis Kasoulidis that “EastMed has always been a tool for causing problems”, the President said that “I do not think that is what Mr. Kasoulidis meant nor is it a matter of commenting on any personal views that some Mr. Kasoulidis expressed at that moment.

What I want to remind everyone is that it was a joint decision of three Governments. If some in Cyprus attribute responsibility or hasty triumphs to the Government of Cyprus, I thank them for acknowledging the great influence that Cyprus has on neighboring countries and especially in the EU. we dragged Israel, we dragged Greece and possibly Egypt.

It is time to get serious. In any project, the viability study is always a prerequisite. The decision is made, the studies are done and if a project is feasible, it is implemented. If not, there are alternatives that will help transfer the natural wealth of the eastern Mediterranean basin to the EU, a vital issue for the EU, security, supply adequacy, etc. “

In a journalist's remark that AKEL called EastMed “words of the air” and criticized the Government for failing to shield the Cypriot EEZ and defend the Republic of Cyprus against the constant challenges of Turkey, the President said that “what I did not hear from AKEL is a proposal either to the National Council or through the discussions that take place in the Parliament to suggest us to buy submarines to shield the EEZ of the Republic of Cyprus, or warships, or aircraft. Finally, it is time, instead of words in the air, thanks to the opposition, to have proposals for specific actions. And if they mean that we have to take the initiative – which I often hear – to start the dialogue again, I want them to respond bluntly. I can take the initiative by coming to the table, but accepting on Turkish terms that the debate will take place on the basis of the two states. Is this what I am suggested to do?

There was not a move that I did not make, that was not even criticized by AKEL, there was no effort and proposal in good faith always based on finding a working solution that is not criticized by AKEL. “It's time for the opposition to act on the basis of constructive criticism, not nihilism.”

In a journalist's remark that the print media cited legal sources according to which he could reclaim the Presidency of the Republic for a third term, the President said that “despite what I have been accused of 'committing', it was a commitment that I fulfilled. immediately after my election for the first term. If the Parliament delays and adopts the legislation after the second term, this does not invalidate my commitment. It was a reform that I consider to be very important and which from the time it was adopted and will be implemented “.