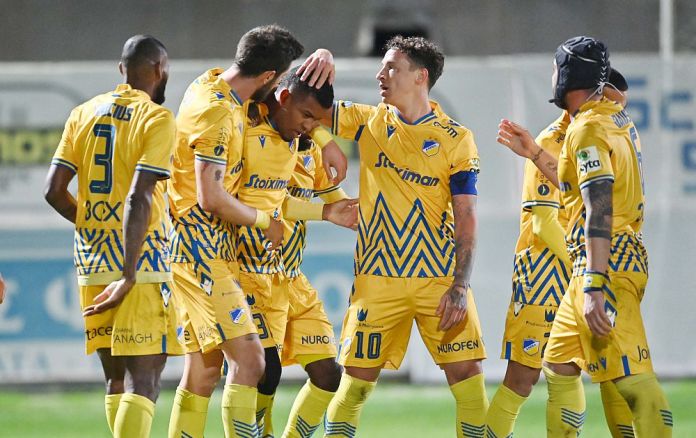 After many months, in the ranks of the thousands of APOEL friends, the smiles are evident for the noticeable improvement of their team, which culminated in the great victories over Omonia and Ethnikos Achnas. Now the vast majority of APOEL friends believe that this team, as formed by Sofronis Augustis, is ready to return to the top positions of Cypriot football.

In a standard vote of APOEL friends for the top against Ethnikos, the first place went to the coach of the team Sofronis Augustis, who was rated with 9.1, the highest score that APOEL coach has received for a long time! In terms of players, the first place was taken by Kvilitaia with 8.7, followed by Giannis Satsias with 8.3 and Vinisius with 8.2.

The people seem to be participating en masse in the competitive rebirth of the team. This was seen in the last two games of the team with Omonia and Ethnikos, while it is expected that it will be seen in tomorrow's game with Olympiakos, despite the bitter cold that is predicted to prevail in Nicosia. Tickets are available at affordable prices (10, 5 and 1 euro).

With passion in the cup

APOEL forgets for a while the championship (on Sunday it welcomes the champion Aris) and concentrates all its attention on tomorrow (19:00) cup match against Olympiakos. It is an institution where APOEL wants to reach the final at all costs, which is why it is expected to play with great passion in order, if possible, to seal the qualification to the “8” from the first match. The coach, not only does not face particular problems, but also has increased options, especially in the midfield. Andreas Karo also participates in full training in rhythms, while players who did not start against Ethnikos are claiming a place in the starting lineup.

Source: gipedo.politis.com.cy
Share
Facebook
Twitter
Pinterest
WhatsApp
Linkedin
Telegram
Previous articleLabor Committee: The extension of the right to apply for paternity leave was discussed
Next articleNikolaidis: A new city is coming, inside the city of Limassol
- Advertisement -