Sizopoulos received answers from Christodoulidis – On July 13 the decisions (video) 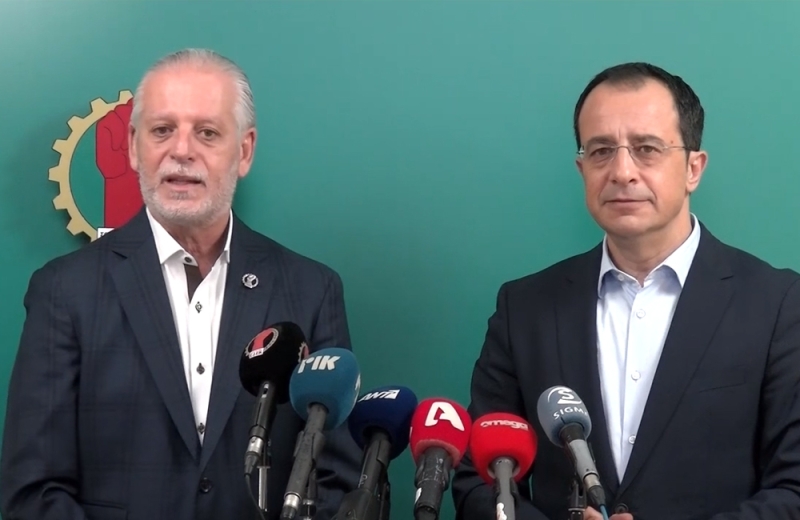 The candidate for the presidency of the Republic, Nikos Christodoulidis, and the leadership of EDEK had an in-depth exchange of views today to explore the prospects of their cooperation for the presidential elections of 2023. The meeting, which took place at the offices of EDEK, lasted about 1.5 hours.

The President of EDEK, Marinos Sizopoulos, stated after the meeting that they heard from Mr. Christodoulidis the main goals of his own policy, in case he will be supported by EDEK and in case he is elected President of the Republic.

< p class = "text-paragraph">“We asked our own questions so that there are the appropriate answers so that we as a party can complete the contacts we have planned and on July 13 at the extraordinary pan-Cypriot congress of the party to be able to submit all views, all suggestions to have a final and final decision on what will be born regarding the stance that EDEK will adhere to in the next presidential elections “, added.

Mr. Sizopoulos said that Mr. Christodoulidis was quite detailed on the issues he raised and therefore all these will be taken seriously in our final decision.

For his part, Mr. Christodoulidis said that they had a very productive discussion and said that he had the opportunity to develop very specific positions and approaches on issues that concern the Cypriot society, such as issues of education, health, immigration, economy, the Cyprus issue. “I have answered several questions and I hope this dialogue will continue,” he said. He said that any procedures and any decisions taken are fully respected.

He also expressed the desire to continue the dialogue to explore the prospects of a possible cooperation.

Asked about the report of Nikolas Papadopoulos, in his speech before the Central Committee of DIKO, that two politicians insisted, until the end, that President Anastasiadis in Crans Montana not accept anything other than “zero army and zero guarantees” and that one was Nikos Kotzias and the other was Nikos Christodoulidis, Mr. Christodoulidis said that the report is very specific. I think the report says that they supported the effort of the President of the Republic, he added.

Mr. Christodoulidis said that today, as when he was Government Spokesman and Minister of Foreign Affairs, he believes that we must at some point stop negotiating with each other in relation to the settlement of the Cyprus issue.

I believe that the goal of the settlement of the Cyprus problem and this is the wish of the vast majority of the Cypriot people, Greek Cypriot and Turkish Cypriot, is there, it is a given, he said.

He said that the framework for achieving this goal is to face Turkish intransigence as it manifests itself every day, and that is where our discussion and goal “which I insist is collective at the end of the day” should focus.

Commenting that they have a different approach to the Cyprus issue with EDEK, Mr. Christodoulidis said that it is one of the issues they discussed.

He stated that the dialogue will continue and that a possible cooperation will have convergences, and common approaches and possible disagreements.

For his part, Mr. Sizopoulos said that it is obvious that in the context of a cooperation they can not have the requirement to have a complete identification of views on all issues.

He said that from the side of EDEK they have clarified from the beginning that these exploratory meetings are aimed at being able to clearly define in every area of ​​government policy, including the Cyprus issue, what are the convergences and what are the discrepancies, so that the collective party organs to have a clear and rational image before them so that they can make their decision.

He added that if they consider that in various issues there is the possibility through consultation in matters where there are discrepancies, there should be mutual compromises in order to possibly have a common line “this is something we will explore and see”.

“We will not blackmail anyone into accepting anyone's position, nor will we forcefully insist on giving our positions to anyone we work with,” he said, adding that in a partnership there can be no absolute identification of positions on all issues.

Asked which of the three main candidates EDEK finds more concurrence of views, Mr. Sizopoulos said that there is no completion of procedures, there will be meetings with other candidates and exchange of views on these issues .

All this will be completed before July 13 so that the EDEK conference is in front of specific proposals with a clear picture to make its decisions, he pointed out.

Asked who he considers that it is the quality characteristics of Nikos Christodoulidis that make him superior to Mr. Mavrogiannis, he said that as President of the party he will not express any opinion in public.

“I will respect the opinion which will be adopted by the party's collective bodies. “Whether I agree with it or disagree, I will defend it with the same passion for its implementation,” he said.

Answering another question, he said that before the conference may be submitted by the Politburo of EDEK and not by its President.