Increases in basic necessities continue to be observed at a rapid pace, with the data presented by the Consumers' Association showing that the champion of increases is sugar, with other necessities also recording significant increase, while at the same time, the fact that inflation stabilized is important.

More specifically, studying essential items in November compared to October, sugar showed the largest increase, with a rate of 16.1%, while potatoes increased by 12.7%. In the same period, there was a big increase in prices of services at home for the elderly and people with disabilities, which saw an increase of 19.46% compared to October, while travel items also increased by 8.1%.

Satisfied with inflation, but disappointed with the increase in some basic necessities, he appeared in REPORTER the president of the Cyprus Consumers' Association, Marios Drousiotis, who, as he said, “in the last four months, inflation stabilized at 8.7-8.8. This fact is gratifying because no additional increases are added to consumers. But just because it has stagnated does not mean that a large portion of our population does not continue to struggle to meet these prices. The happy fact is that fuel last week announced a four cent reduction, last Monday they announced a four cent reduction and today they have announced another five cent reduction”.

What we can say for certain  the Consumer Price Index, however, added Mr. Drousiotis, “is that it stabilized and that is the important element. Sugar is the champion in terms of prices, followed by meat and beef”.

Unfortunately, complaints from ordinary citizens seem to continue and are even daily. “We became the confessor of consumers. But we let people tell us their grievances, so that they get off their nerves. It is every day that citizens come to us to complain about the situation they are in and convey their pain to us. It will definitely be quite difficult for some families, especially now that the holidays are approaching and some families will have a harder time this year than other years at Christmas”.

See below in detail the products that had the biggest increase: 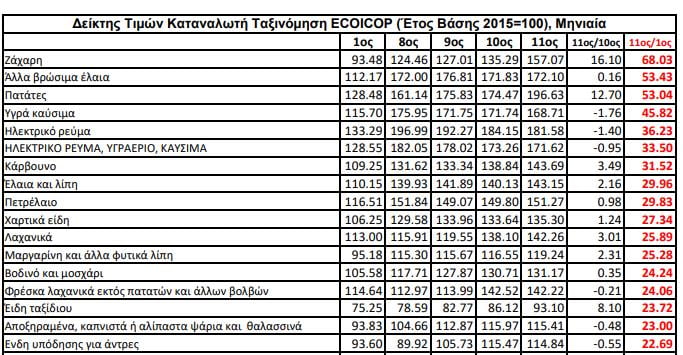 According to the data of the statistical service, the Consumer Price Index in November increased by 0.54 points and reached 114.55 points compared to 114.01 points in October 2022. inflation in November 2022 increased at a rate of 8.7%. For the period January-November 2022, the CPI recorded an increase of 8.4% compared to the corresponding period last year.

The categories Food and Non-Alcoholic Beverages (2.97), Housing, Water Supply, Electricity and LPG (2.36) and Transport (1.76) had the greatest impact on the change in the CPI of November 2022 compared to November 2021 . The categories Food and Non-Alcoholic Beverages (0.19), Transport (0.16) and Clothing and Footwear (0.11) had the greatest positive impact on the CPI change compared to the previous month.

Source: www.reporter.com.cy
Share
Facebook
Twitter
Pinterest
WhatsApp
Linkedin
Telegram
Previous article
PHOTO: A minor is still absent from her place of residence
Next article
“I found out on my birthday that I have leukemia, it was a great gift because I didn't know”
- Advertisement -