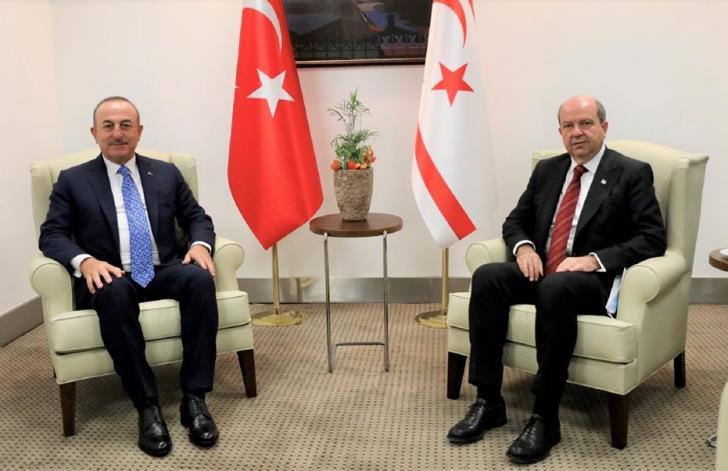 The Greek Cypriot side hopes for a positive response from the Turkish Cypriots to its proposal for a discussion of confidence-building measures, as a step that will contribute to the resumption of talks. The Turkish side shows that only talks, on the basis of decades, do not think about the Cyprus issue. Turkish Foreign Minister Mevlüt Çavuşoλουlu, during his visit to the occupied territories, took care to determine the course of the Cyprus issue, as at least what the Turkish side seeks. & Nbsp;

For the Turkish side, the only available The way to resume talks on the Cyprus issue is “the acceptance of sovereign equality and the equal international status of the Turkish Cypriot side.” Ankara, through Tsavousoglu and in the presence of Tatar, took care to record in a specific way the course it seeks in the Cyprus issue (source Cyprus/GTP): & nbsp;

Tsavousoglou: Rejects MOE and sends a message to two states Nicosia to Turkish Foreign Minister: We do not succumb to threats

According to Mevlüt Çavuşoλουlu, this position is not under negotiation but “the only solution dictated by the realities on the ground.” & nbsp;

The Turkish side insists at every opportunity that the confidence-building measures promoted by the Greek Cypriot side are not new but are old MOEs “whose term has expired” and which are being tried “to be sold in the EU and internationally as if they were new proposals “. & nbsp;

Nicosia does not seem to receive the answers it expects from Ersin Tatar in relation to the MOE as the Turkish Cypriot leader prepares” proposals for co-operation “. Ersin Tatar reiterated that “it is not possible” to accept the proposals of the Greek Cypriot side, which he characterized as “non-existent, invalid”. & Nbsp;

According to Ersin Tatar, in the meeting with Mevlüt Çavuşoλουlu, the answers/proposals of the Greek Cypriot side were substantially discussed: “We will soon submit some of our proposals for cooperation that will be for the benefit of both peoples.” In essence, Tatar's response to Anastasiadis will be based on the logic of cooperation between the two countries. & Nbsp;

Regarding the MOEs, M. Tsavousoglou had also stated the following: “We are also in favor of confidence-building measures, but we know very well the reason behind the fact that some important elements are removed through the solution in the general sense and effort. to be sold as confidence building measures. We never fall into such traps. “If the Greek Cypriot side is sincere, if it wants to see the Turks of Cyprus as equals, it will recognize their sovereign equality and we will go for cooperation.” & nbsp;

THE DERTY FOR VAROSI: In his statements, M. Tsavousoglou also referred to the issue of Famagusta, emphasizing that “the derti of the Greek Cypriot side is to take back Varosi”, noting at the same time how much the decision to open it bothered the Greek side. city. He added that Varosi is a territory of the pseudo-state while he claimed that “the steps taken in the context of the opening of Varosi do not violate international law. I want to emphasize that the steps taken here are in harmony with international law and are steps taken for the benefit of both peoples. “

An intense confrontation between Greek MPs and the Turkish Minister of Defense, Hulusi Akar, took place in the committee of the NATO Parliamentary Assembly in Istanbul. According to Greek media reports, during his speech, the Turkish minister reiterated Ankara's accusations against the islands, while accusing Greece of supporting terrorism.

Mr Akar was responding angrily to questions from Greek lawmakers, who also said “how are you in favor of a NATO alliance when there is a casus belli and this hostile attitude”. The confrontation lasted for 12 to 13 minutes until Akar left the room and continued in the corridors. that Greece finds a firm understanding and support for Turkish aggression throughout the international community.

“Our sovereign rights and our national sovereignty are unquestionable and fully protected, but also guaranteed, both legally and historically. “Myths and baseless allegations do not affect Greek law in the least,” the government spokesman added.

The latest statements by Turkish officials on the Aegean and the Cyprus issue have caused discomfort among political parties and candidates. The president of DISY, Averof Neophytou, stated that Erdogan's challenges will not be limited to Greece. He expressed the hope that “he will not use Cyprus” because he will find resistance in Greece. & Nbsp; is a very serious problem and an obstacle to the efforts to restart the negotiations for a solution. “We who are not comfortable and will never accept the division, need to take initiatives in the direction of the international community,” said St. Stefanou.

DIKO notes that “Turkey, in order to negotiate seriously and productively, must be forced. “Unfortunately, the absence of a assertive policy and the failure to impose sanctions have intensified its intransigence.”

Greece with additional concessions in the context of the talks or in the deposit of MOE “.