An uproar has been caused by a textbook for the 3rd High School Biology course, in which it is stated that one way to protect against sexually transmitted diseases is chastity and abstinence from sexual activity before marriage.< /p>

Specifically, on page 68 of the 3rd High School Biology book and in the chapter on the protection of individuals from sexually transmitted diseases, it is stated that one way of protection is to have abstinence, which implies chastity, i.e. abstinence from sexual activity before marriage. 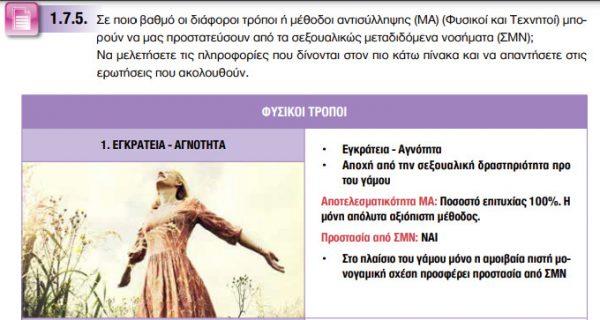 In fact, it is stated that “MA effectiveness: 100% success rate.” The only absolutely reliable method. Protection from STDs: YES In the context of marriage, only a mutually faithful monogamous relationship offers protection from STDs.”

Next to said text, there is a female figure.

Naturally, this specific reference, but also the fact that immediately below the text there is a reference to periodic abstinence and refers to when a woman should refrain from sexual intercourse in order to avoid any unwanted pregnancy, caused an uproar on social media , with various users talking about the tooling of a school textbook, so that some messages and opinions can be passed on to children.

However, the Ministry of Education and a well-informed source are aware of this specific issue, he told REPORTER p as the matter was identified recently, however, instructions have been given immediately and it is being examined.

3rd high school biology book in Cyprus! We exercise restraint by tolerating the nonsense of the Ministry of Education and every idiot pic.twitter.com/NFr3jdTYva