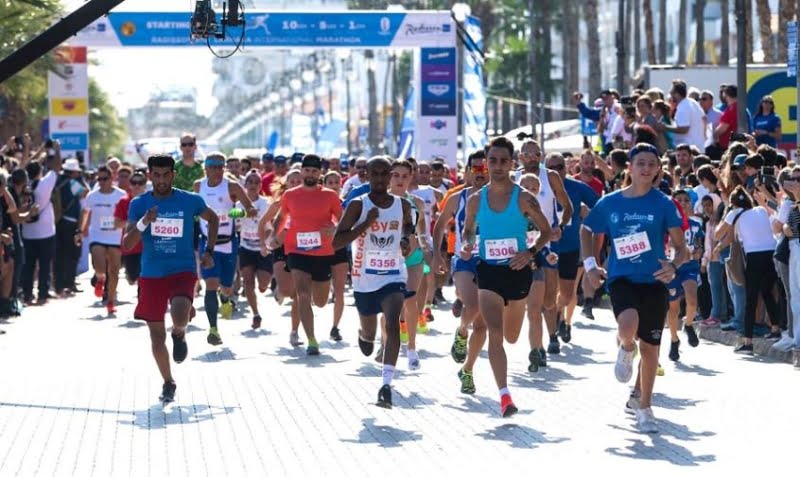 Me the participation of thousands of athletes from Cyprus and abroad, the 5th Radisson Blu International Larnaca Marathon takes place again this year on November 20, in the city of Zenon.

In a press conference, held today, Tuesday, October 25, at the Radisson Blu Hotel, which is also the title sponsor of the event, all the details of the routes were presented. “The aim of the organizing committee of the 5th Radisson Blu International Larnaca Marathon is on the one hand for the runners to enjoy the experience of a real fiesta of sports and culture and on the other hand to continue the rich charity work that the organizers have consistently presented since the first moment in 2017”, as reported.

In his greeting, the Mayor of Larnaca, Andreas Vyras, said that “now the Radisson Blu Larnaca International Marathon does not need advertising and this can be seen by anyone who is in the city on November 20”. It has been seen over the years that this day, with thousands of people from all over Cyprus and abroad, is very important for Larnaca, since it is a day of celebration, he said and expressed the certainty that “on November 20, Larnaca will be flooded with people , joy and sports”.

He added that “a lot of effort and work is being done by the whole team and the term “team” includes the sponsors and the Municipality of Larnaca who has supported the organization all these years”.

For his part, the CEO of SunnySeeker hotels, Marios Polyviou, said in his own greeting that “for the fifth consecutive year, the Radisson Blu Hotel Larnaca is the title sponsor of the event. A highly successful partnership that continues”.

He added that “the Radisson Blu Larnaca International Marathon  beyond a sporting event, it is an institution that constitutes a way of life. The benefits of this institution are manifold for Larnaca, if we take into account the thousands of visitors who arrive in the city and the thousands of overnight stays created”.

Besides, the Executive Advisor of the Petrolina company, Georgia Lefkaritis, expressed “pride for this great sports event that is being held for the fifth year. From the beginning we were by and believed in this project, which promotes sports, culture, volunteering, i.e. all those principles that we also want to promote”.

Also, the Deputy Ministry of Tourism, from first year of holding the Radisson Blu Larnaca International Marathon and through the promotional program  sports events, strengthens the organization.

In his own greeting, the President of the Provincial Volunteering Coordinating Council of Larnaca, Andreas Sergiou, representing the Pan-Cyprus Volunteering Coordinating Council, said that “volunteers have the opportunity to experience the joy of giving to their fellow man, personal fulfillment, new experiences, knowledge and skills, to create friendships, to participate in society”.

As mentioned in the press conference “Radisson Blu Larnaca International Marathon is the first green marathon in Cyprus, since its first year in 2017. It follows a coordinated program of green actions called “Make the World Greener” which includes actions concerning water and the aquatic environment, material recycling and transportation”.

The Radisson Blu Larnaca International Marathon is under the auspices of the Environment Commissioner, who in her greeting said that “the effort that all of us must make today to protect humanity in the area of ​​the environment is enormous. And if so much emphasis is placed on the Green Marathon, it is because a huge emphasis is placed on every detail and aspect of it, which serves the athletes who arrive from every part of the world” he said and noted that “visitors are good, but we also have to take care how we deliver the city the next day”.

In addition, in a written announcement by the organizers it is stated that “the charity side of the Radisson Blu International Larnaca Marathon has been dominant since the first year of its holding and the organizers are continuing the rich charity work this year as well. Radisson Blu runs and supports the Special Olympics, the  Karaiskakeio Foundation, the Christina Apostolou Foundation and the Ronald McDonald's House of Charities Cyprus”.

In addition, Radisson Blu Larnaca International Marathon “continues its partnership with the GivenGain Foundation, a global online fundraising platform, to offer participants the opportunity to make a difference for their favorite cause”.

Georgia Michael, Organizational Leader of Ronald McDonald's House of Charities Cyprus, said that “we need support to be able to provide this supportive care and continue our work”.

It is noted that starting from Finikoudes beach on Sunday, November 20, 2022, athletes from all over the world will run and test their endurance in one of its 7 routes and will be part of the biggest celebration of sports.

< p>Sunday's competition program starts with the basic course of the Marathon Road (42.195 km), the Half Marathon (21.095 km) and the 10 km road race. Following are the routes of the 5 km road race and the 5 km corporate race, where teams and companies from all over Cyprus will test their limits.

The day ends with the Fun Race 1 km for adults and with the McDonald's™ Kids Race 1 km, while all routes are designed to offer refueling stations so that everyone can enjoy their participation in the race to the fullest.