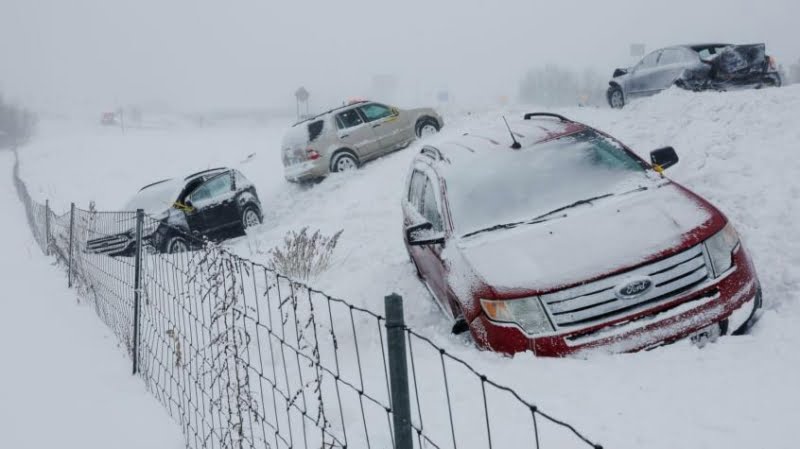 The biggest risk in relation to the ice storm hitting the USA is what will follow, the Director of the Department of Meteorology Dr. Cleanthis Nikolaidis.

“The biggest danger that exists apart from this situation remaining for a few more days is what will happen next, as if southerlies with warmer air masses follow then the problem will be called snowmelt, melting of the snow that is, and this can lead to in flooding phenomena”, he said in response to questions from KYPE.

The severe snowstorm that has been hitting the USA for days and has claimed the lives of dozens of people is still far from over, the American authorities warned today . Forecasters are predicting another 30cm of snow will fall and the phenomenon has been labeled the “storm of the century”.

The death toll from the “blizzard of the century” was at least 49 dead as of Monday night and fears are being expressed how it will increase further.

As stated at the KYPE, Dr. Kleanthis Nicolaidis, the situation prevailing in the central and northern regions in the United States, as well as in Canada allows the transfer of very cold air mass from the North Pole to these regions and due to the very low temperatures, everything that falls is in the form of snow.

This phenomenon, he noted, which continues for the fifth day, has resulted in the loss of lives, the creation of problems in the social and commercial activities of these areas, as the low temperatures lead to freezing of the snow, thus creating ice with characteristic temperatures – 30 to – 35 degrees Celsius.

“With such temperatures, many infrastructures are not functional, while people are in a white line with enormous difficulties to go to work, to go out of their homes, to procure goods,” he continued.

In combination with the very strong northerly current that prevails, a network of problems is created which at this stage is intractable, he said.

He noted that the biggest risk beyond this situation remaining for a few more days is what will happen next, as if southerlies with warmer air masses follow then the problem will be called snowmelt, that is, melting of the snow, and this can lead to flooding phenomena.

He recalled that in 1996 in the State of North Dakota such a problem had arisen and an entire city was found under the water because, as he said, an incorrect forecast claimed that the snow would continue, while it did not continue and high temperatures followed, resulting in melt the snow and the water to flood the city that was in a natural hollow. There are also these problems, he said, and mentioned that according to the meteorologists, it seems that after the snow there will be a warm episode with all the consequences.

In the US the authorities warned that although the intensity of the storm has stopped, compared to the previous days the phenomenon remains dangerous.

Western New York, though used to cold and storms, was covered in two feet of snow over the weekend. The temperature has remained at polar levels since last week.

In Erie County, whose capital is Buffalo, 25 people have died. In Ohio, nine people were killed in weather-related crashes.

At the height of the storm, emergency crews were unable to reach people in need, such as those trapped in their cars or left behind. without electricity in their homes.

“It is heartbreaking to hear calls from families with children, who say they are frozen,” commented an official.

More than 12,000 buildings remain without electricity and in some power is not expected to be restored before Tuesday.

Also, chaos at airports continued today, with at least 2,600 flights canceled. Conditions are expected to improve gradually as the days pass.