The black limousine, Christodoulidis and Vgenopoulos – The peaks of Phaedo and the book by Makarios Drousiotis 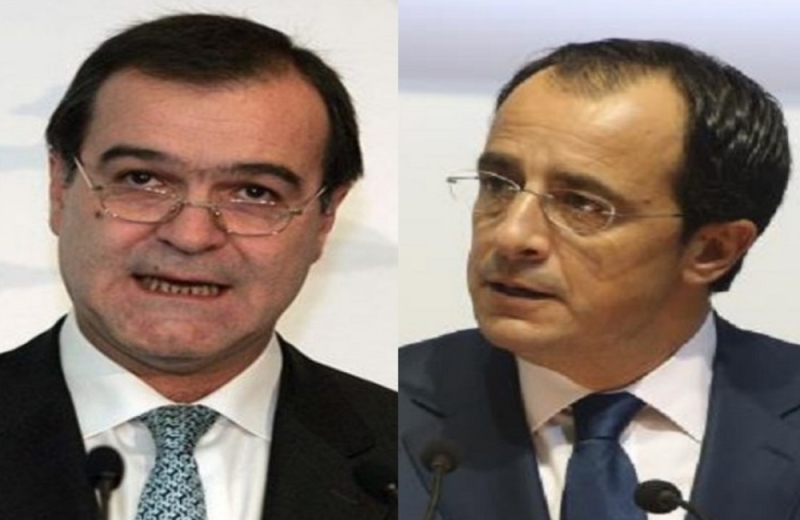 Tips against the former Minister of Foreign Affairs and candidate for the presidency of the Republic, Nikos Christodoulidis, for a meeting in Athens with the Greek businessman Andreas Vgenopoulos, left from the podium of the political and ideological conference of DISY, the mayor of Paphos, Faidos, Faidos.

Specifically, Mr. Faidonos stated that “it was not provoked to reveal publicly what the dialogue between Andreas Vgenopoulos and the specific one in Athens included, when he was received by the black limousine and taken to Vgenopoulos' headquarters. “These things must be asked in the public debate and they must be answered and not tell me about incorruptible and clumsy.” He asked “what was he looking for in a meeting with Andreas Vgenopoulos after the haircut in Athens?”

In fact, Mr. Faidonos called on the Minister of Finance to further investigate the transfer of CIPA (Cyprus Organization Investment Promotion) under the supervision of the Ministry of Foreign Affairs.

Asked to answer who he was referring to during his speech, the mayor of Paphos stated to politis.com.cy that the reports concerned the face of Nikos Christodoulidis.

The next book of Makarios Drousiotis

The first reference to the meeting of Nikos Christodoulidis with Andreas Vgenopoulos was made in the book of the journalist and writer, Makarios Drousiotis, “The Gang”.

Information of politis.com.cy states that the next book of Makarios Drousiotis will include an entire chapter on the Vgenopoulos-Christodoulidis meeting in Athens, which was about the company Focus, a topic that “P” dealt with extensively.

There is no doubt that Anastasiadis had a relationship with Vgenopoulos and the latter had demands from Anastasiadis to intervene to stop the persecution against him. In August 2013 he died and I was an audible witness of a telephone conversation that Anastasiadis had with Vgenopoulos. I had opened the door of his office while he was talking to him. When he saw me, he nodded to me to come in and sit down. When I realized that they were discussing sensitive issues, I nodded to him to go outside. With the index finger of his hand he showed me the floor, that is, he asked me to stay. Vgenopoulos demanded an end to the persecution against him and Anastasiadis, politely, explained to him that the justice system in Cyprus was independent and was not like that of Greece, where the prime minister could intervene. Vgenopoulos insisted and Anastasiadis, with a lot of patience, repeated to him, “My Andrea, understand me, it is not possible”. The discussion then turned to the “Citizen” digging into the story with Focus. Vgenopoulos saw Averof Neophytou's finger and Anastasiadis tried to convince him that he had no influence in the newspaper, while supporting Neophytou.

I was impressed that Anastasiadis wanted me as an audible witness of his conversation with Vgenopoulos. It took me a few years to understand why my accumulated experiences helped me to decode his communication practices. Anastasiadis can talk to you and convince you of anything. You can hear from his mouth the most revealing truth, even the biggest lie, with the same naturalness. In order to draw conclusions from what he says, you must have a judgment, but mainly the necessary information, in order to understand what is in the back of his mind. You may be wrong again.

An incident told to me by my former colleague at the Presidential Palace, Pampos Charalambous, is the best example to understand Anastasiadis's communication tactics: It was a few days before the 2016 municipal elections. DISY supported the candidacy of Nikos Nikolaidis for Limassol Municipality, but some high-ranking local officials were working against him. Nikolaidis contacted Pampos Charalambous and gave him some names, asking the president to talk to them on the phone and tell them to stop fighting him. Charalambous went to Anastasiadis's office with the list in hand and conveyed Nikolaidis's request. Anastasiadis opened his arms wide and shouted at him: “O Pambo, I am the president of the Republic, you are mixing me with the mayoralty”. Charalambous got up to leave frowning, when Anastasiadis told him: “Sit down, Jiame. Where are you going? Did you see the coffee maker inside? ” A meeting had preceded the president's office and the coffee man, who belonged to AKEL and Anastasiadis suspected him of being vigilant, was collecting the cups. Anastasiadis pretended to be irritated, in order for the coffee man to convey the message to AKEL that the president is not interfering in the municipal elections. As soon as the coffee maker left, he took the list to call the executives, as Nikolaidis had asked him

This is exactly what he did to me when he talked to Vgenopoulos. He wanted me as a witness that he did not accept his appeals to intervene in justice, so that I could defend him. I would not be surprised if I learned that when I left his office he spoke to Vgenopoulos on the phone again and said “My Andrea, I had someone next to me who was listening…”. However, as soon as he hung up the phone, he commented, saying: “Let's go to c *****. I will not get involved for his sake “.

Vgenopoulos continued to pressure him. His name was often on the list of people who contacted and asked to speak to the president. Vgenopoulos asked to meet, but in the climate of the time, Anastasiadis was afraid. In one case, on November 5, 2013, when he visited Athens, he sent Nikos Christodoulidis as his personal envoy. Christodoulidis later told me that Vgenopoulos had sent a limousine to pick him up from the “Great Britain” hotel and took him to a meeting with his bodyguards, who looked like gorillas. To get to his office, he said, huge sliding doors opened. Christodoulidis told me that Vgenopoulos demanded that the court proceedings against him be terminated.