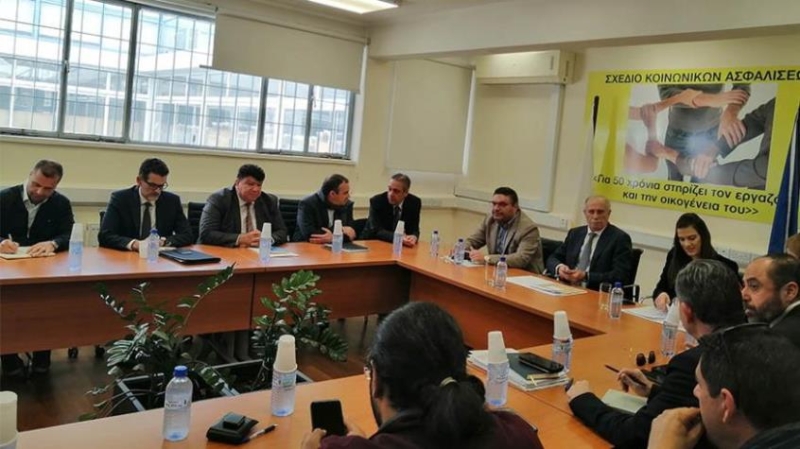 All parties expressed their satisfaction on Friday with the outcome of the meeting at the Ministry of Labor on the issues concerning the EAC, with the Chairman of the Board of the Organization expressing the belief that the viability of the EAC is ensured. It was agreed that the labor issues be referred by the EAC Board to the Ministry of Labor for mediation, and that intensive contacts begin, and that an intensive consultation take place within the next week, with the aim of sending an additional letter to the Cyprus Energy Regulatory Authority ( CERA), which should specify exactly the ways in which EAC will be involved in the RES sector.

After a meeting lasting almost four hours, between the Ministers of Labour, Energy and Finance, the Board of Directors and the management of EAC and the trade unions of the Organization's employees, EPOPAI, SIDIKEK-PEO, SYVAIK, and SEPAIK, the Minister of Labour, Kyriakos Kousios, announced that it was a “very productive, informative and efficient meeting, which had a happy ending”. mediation, “and intensive contacts will begin, at the Ministry of Labor, in order to reach a conclusion as soon as possible”.

Informing about the policy issues, the Minister of Energy, Natasa Pileidou, said that “we all agree that the EAC has a role in the activity in the field of RES (renewable energy sources), but also a very important role in the competitive electricity market of Cyprus as well as in ensuring the adequacy and energy security of our country”.

Therefore, he added, regarding the issue of EAC's activity in RES, it has been agreed that an intensive consultation will take place within the next week, with the aim of quickly sending an additional letter to CERA, which will clarify exactly the ways in which EAC is involved in the RES sector, “of course based on the preliminary plan that had already been submitted to CERA, with the aim of having this plan approved by CERA as soon as possible”.

Regarding the issues of Dekelia, said the Minister, “we all agree and have always agreed that the production area of ​​Dekelia must continue to be used both for reasons of sufficiency and for reasons of energy security”, and therefore again based on the development plan it already has prepared by EAC and which has already been approved by the Organization's Board of Directors, the consultation will take place next week, so that this development plan is also approved by the Ministry of Energy and submitted additionally to CERA, together with the activity plan in RES , “where, in any case, all the issues are consistent with each other in the holistic treatment, so that they can be taken into account and implemented”.

“At the same time, the consultation we are doing with the European Commission will continue, on the same wavelength, and we believe that all this will have a happy ending both for the sustainability and the role of EAC itself, and of course for the consumer with the reduction of prices but also the green transition”, said Mrs. Pileidou.

Finally, regarding the issue of controls, which will be carried out in relation to the issues of the Ministry of Transport and charging points, a consultation with the Ministry of Transport will also be launched as soon as possible, he noted. “We believe that these are issues that can easily be resolved and have already preliminarily agreed with the Minister of Transport that this consultation will take place immediately in order to resolve the issues that have arisen, and where the necessary amendments need to be made to the bill that has been submitted to the Parliament”, he added.

When asked if they will have time to do all this before the end of their term, the two Ministers answered positively.

Mrs. Pileidou noted that the EAC's development plan has already been approved by the Organization's Board of Directors. “We already have some information regarding the issues he is dealing with and I think we are already more or less in agreement regarding what will be submitted to CERA,” he said. He added that an effort will be made so that before the end of February all issues are finalized.

Mr. Kousios said that, if there is good will from everyone, there is enough time “to be able to provide solutions to the problems that are presented”.

Mr. Kousios thanked Ms. Pileidou, the Minister of Finance , the Board of Directors and the management of EAC, the employees as well as the service agents “for the productive, constructive   consultation we had, which aimed not only to solve the problems that exist but also to be able to offer the services of the EAC to our fellow citizens and to ensure its sustainability”.

The President of the Board of Directors of EAC, Despoina Panagiotou​​ Theodosiou in her own statements, noted that, today, “we consider that we have ensured the viability of EAC and also that its role as a pillar in the energy landscape of Cyprus will continue” .

On behalf of the EAC Board of Directors, he expressed their pleasure, “that we have finally come to an end”. Mrs. Theodosiou thanked all three Ministers, “for the excellent cooperation, which we have and have had all these months”, but also the departments and the  service of the Ministries, and the trade unions “for their constructive attitude and long-term cooperation , not only for the issues we discussed today or have been discussing lately, but for all issues concerning the Electricity Authority”. He also thanked the Directorate and the Service of the Electricity Authority, because, as he said, especially in the last few weeks, a lot of work has been done to prepare for the meeting.

The President of EPOPAI, Kyriakos Tafounas, noted that, indeed, “we had the opportunity to develop our positions on the serious issues that we have highlighted and that have been of concern to us lately”, stating that there was indeed a discussion that was intense in some places. “The good thing is that we reached a conclusion on all issues. We are satisfied and will await the final decisions, conclusions, letters, for what was previously presented, both by the Minister of Labor and by the Minister of Energy”, he added, expressing their thanks to the three Ministers, the EAC Board of Directors and the General Director of the Authority.

It is recalled that representatives of a fifth union of employees of the EAC, ASTEPAIK, had earlier a 20-minute meeting with the Ministers, the Board and the management of the EAC, and left due to the disagreement of the other four unions to sit in the same meeting with them, noting that he disagreed with their positions and did not participate in the measures that had been taken.

Source: www.reporter.com.cy
Share
Facebook
Twitter
Pinterest
WhatsApp
Linkedin
Telegram
Previous article
POPO: Demographics to be treated as a national problem
Next article
Applications for the financing of motion pictures for 2023 are accepted by the Ministry of Finance. Culture
- Advertisement -