The first childcare center in Nicosia-Who can apply

It has opened its doors and is ready to be filled with children's voices, the first childcare station, aimed at children aged 2-5 and it is free. What sets him apart from the rest of the childcare centers is that he has working hours until 8 in the evening and comes to support low-income families, as well as parents who belong to vulnerable social groups, such as single parents and those with many children.

The “Rainbow” Kindergarten is an initiative of the Nicosia Multipurpose Municipal Center. A project that took years to complete and finally became a reality after going through several challenges due to the pandemic. The building that houses the childcare center had to be rebuilt, renovated, furnished with the appropriate equipment and staff, in order to open its doors and receive its first little visitors.

This was last Monday, which was the first day it worked. He had three children, who went to the place for some time, so that they could acclimatize, meet the teachers who will keep them company for the hours they will be there, but also to get used to the idea that they will slowly be away from their family . Entering the nursery, the first thing one encounters are the colors that fill it and make you immediately feel a warmth. 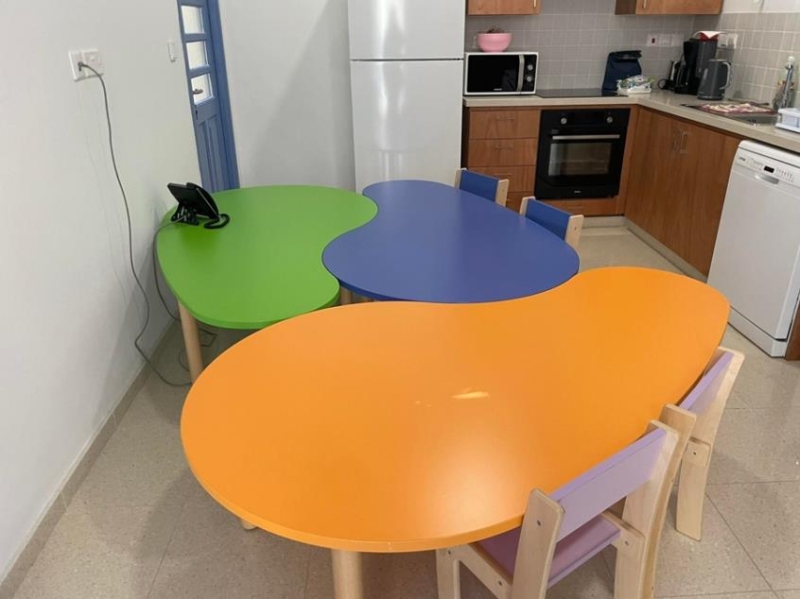 Besides the colors, another key ingredient that makes you feel familiar is the happy mood that the station staff radiates. Despite the fact that there were only three children there, they gave them all their attention, played with them, had fun and taught them some things.

The childcare center building is located opposite the Nicosia Multipurpose Center, since this is also an annex of the Center. The house is sponsored by the Polyviou family and the Alkyonides Charity and is named “Georgia Polyviou Building”.

The tour was given by Nicole Tamana, who is the children's program officer and informed us about all the programs. operation of the daycare center.

“The program runs from 7 in the morning until 8:00 in the evening. Basically we have three timetables. They are from 7:00-15:00, from 7:00-18:00 and from 7:00-20:00. Those who will choose the 8:00 pm hours must meet the criteria we have set and it will be proven that they work until late at night. It is divided into three phases, so that parents can choose the schedule that suits them. We just want proof for 7:00-20:00 because we don't want kids parking here. We want them to spend time with their family too”.

Regarding the acceptance criteria for the Center's children, parents of children aged 2-5 whose parents are residents of Nicosia can apply and they will be given priority if they belong to one of the following groups:

-Parent with chronic illness and/or disability pension with low incomes

In order to apply, one must submit it electronically, through the “Noiazoami” platform of the Municipality of Nicosia.

“We have received applications for children who are yet to turn two and we are waiting for them. We have had several applications since the day we opened and they need to be evaluated, based on the criteria, because we prioritize the income criteria. Priority is also given, depending on the order in which the application was made. We have from 16 to 20 seats. We will see, depending on the demand, how many seats we will offer”. 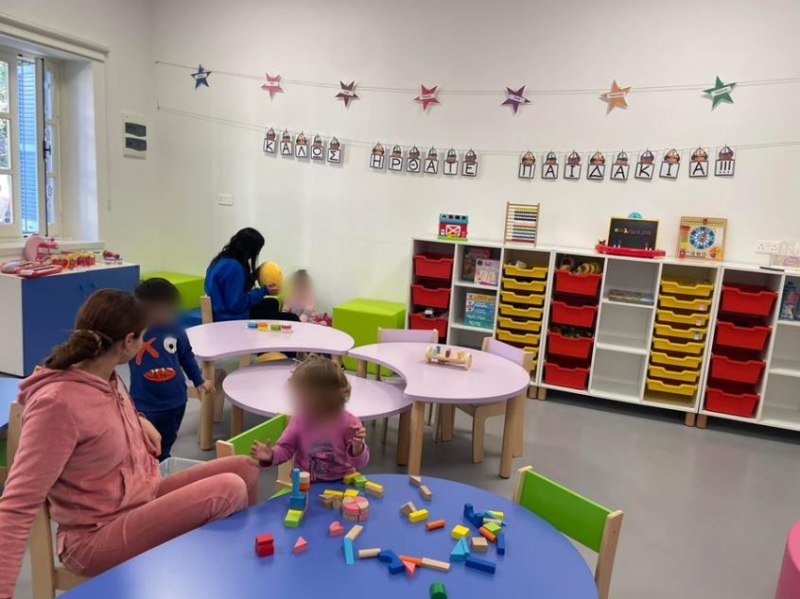 How the idea came about

The initiative is not recent. It had started many years ago, during which time several things had to be changed in the building and one could say that it was almost built from scratch.

“Now we are trying to start the operation of the programs. It is a big project, which took many years. We also experienced the coronavirus pandemic, which required us to suspend the operation of all the programs of the Nicosia Multipurpose Center and to intervene in another way. We sent love packages, which we took to our members, who were in the vulnerable groups. If it wasn't for the pandemic, maybe we would have started the operation earlier”.

“We try to help families reconcile with the labor market, so that some can join and some can continue to work, because there are a lot of people that jobs they are on shifts or even Saturdays and we try to build on that. We see that it has a response and soon all positions will be filled”.

The nursery offers activities such as:

-Linguistic expression, with the aim of children defining the rules of their class and through discussions to learn the rules of good behavior and develop their vocabulary

-Ethical and emotional education, so that they know the concepts of respect, cooperation, teamwork and develop the feeling of “belonging” to a group

-Creative Arts and Physical Education, with the aim of developing fine and gross motor skills, gaining self-control and developing their imagination and creativity.

Children are offered lunch, as well as afternoon snacks, however no breakfast and parents are asked to ensure that children have a healthy breakfast with them. 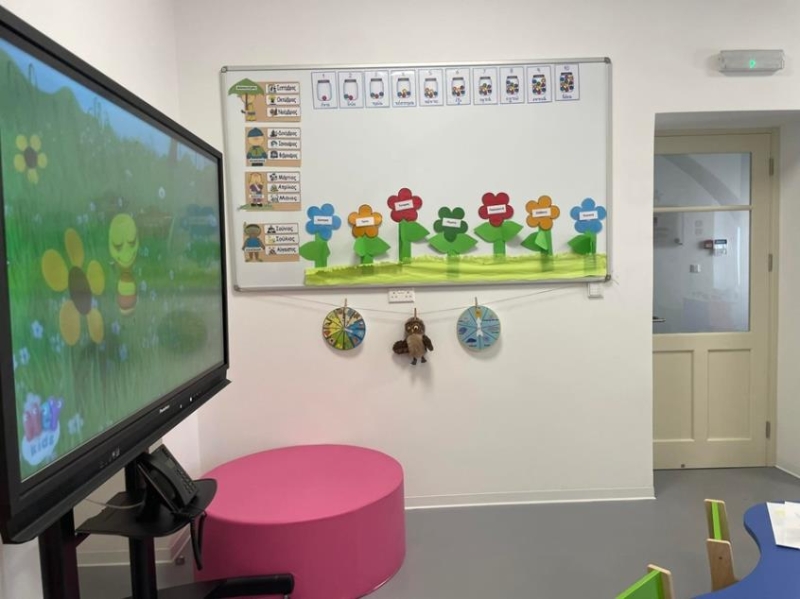 In the two-story building, where the childcare center currently operates, a Protection Center for children aged 8-12 is expected to open, which will be a club for children who, when they leave school, to have a place to

“We are waiting for the applications for our attendants to be approved and to start its operation. It might take a few months. Its hours are from Monday to Friday, from 13:00 to 3:00 and from 13:00 to 20:00 at night, for those who are proven to need it. They will be offered their transportation, with the Center's buses, their security will be offered, they will be fed with one lunch and two afternoon meals, as well as activities, which we will prepare at a later stage”.

The project is co-financed from the European Regional Development Fund, from national resources, under investment priority 9b, within the framework of the operational program competitiveness and sustainable development 2014-2020 and the beneficiary is the Municipality of Nicosia and the implementing body is the Municipal Center of Nicosia. 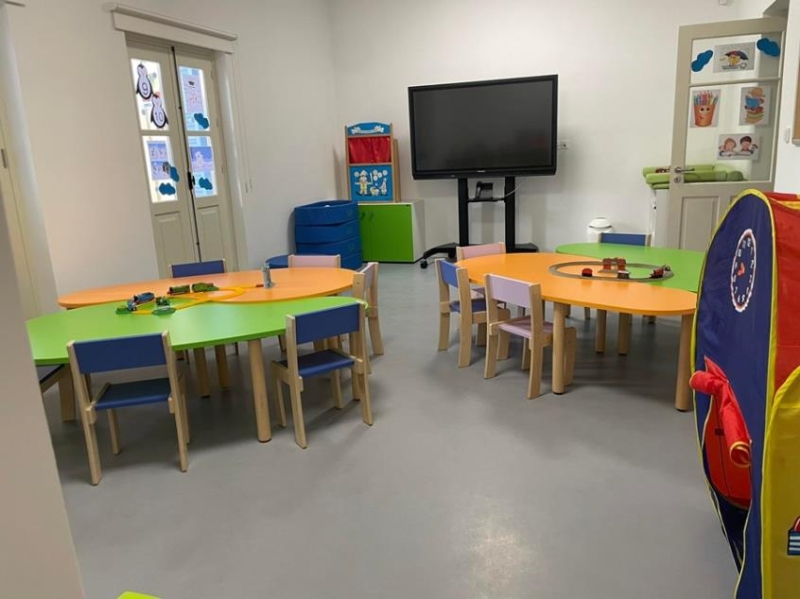 Source: www.reporter.com.cy
Share
Facebook
Twitter
Pinterest
WhatsApp
Linkedin
Telegram
Previous article
N. Nouris: The development of the mountainous areas is the primary goal of the Government
Next article
N.Averof: It is time to march with one mind and with patriotic responsibility
- Advertisement -