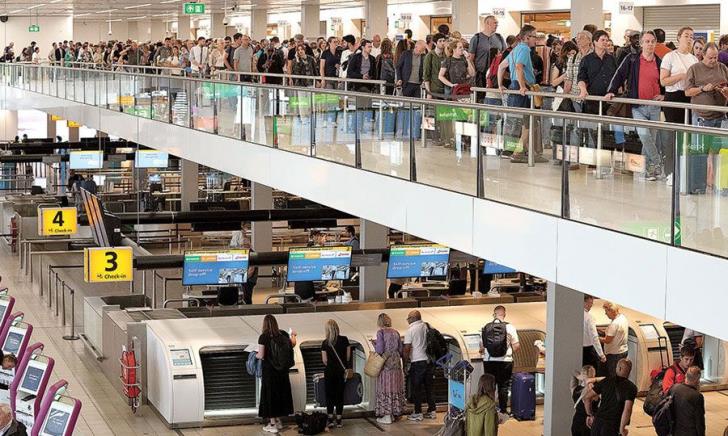 The percentage of flights in Cyprus affected by the situation at European airports is smaller, said the Deputy Minister of Tourism Savvas Perdios, while urging the passenger public to travel in months other than July and August.

In his statements after the end of the annual commemoration of the Fallen Heroes of 1964 & 1974 which was held in the community of Pigaenia and when asked about the impact of dozens of flights at Paphos and Larnaca airports and the lack of staff, Mr. Perdios said that the positive thing is that we are talking about tens of flights and not hundreds or thousands, as it is for other destinations, such as  Greece, Croatia, Spain and so on.

He added that the percentage of   affected flights to Cyprus. He also said that it is good for our fellow citizens who wish to travel in July and August to know the truth and that it is not a problem that can be solved.

So let's not expect, he continued, “someone to magically solve this problem, neither Hermes Airports can solve it, nor the Ministry of Transport, nor us as the Deputy Ministry of Tourism since the demand for travel is so great that airlines have not been able to to properly staff their programs”. He said even airports abroad are understaffed.

Mr. Perdios then advised the traveling public who can travel outside of July and August and move their holidays further down the line, so as to help themselves the airlines and airports.

He also added that the The Deputy Ministry of Tourism does advertise for the summer, but in a way that people abroad understand that the Cyprus summer extends until November. In this way we also help the airlines, airports, booking agents and so on, he concluded.

Satisfaction with the five-month results

The Deputy Minister of Tourism Savvas Perdios described this year as the best and based on the official statistics provided by the Statistical Service regarding tourist arrivals before five months.

Speaking after the end of the annual commemoration of the Fallen Heroes of 1964 & 1974   which was held in the community of Paginia at the   Church of Agios Charalambos in Paginia, he said that based on the official statistics of tourist arrivals before the five-month period, we are currently at about 75% of arrivals compared to 2019.

He continued, “a performance which under the circumstances is considered satisfactory if one considers that in this first five months we also had to manage Russia's invasion of Ukraine which unfortunately deprived us of a large share of our tourism this year but also the outbreak of Omicron, which also during the first months of the year brought us back to Cyprus very strict protocols, the strictest in Europe”, adding that under these circumstances we must say that being at 75% today is not a bad development. Mr. Perdios noted that the demand continues to be high.

He admitted, however, that the year we are going through is certainly not without difficulties, stating at the same time that  it is a given that  the numbers  we lost from Russia and Ukraine are quite large.

He added that with the timely actions of the Deputy Ministry and tourism agencies, they have managed to somewhat mitigate these losses. However, he mentioned that there are still various adversities that they need to face, such as some cancellations that they see, especially in the last month.

There is, said Mr. Perdios,   such a great demand internationally that the airports and various airlines do not have time to serve, noting that we are entering the heart of the summer  which are considered  months very strong for tourism.

He pointed out that the positive thing about the whole case is that compared to other countries, Cyprus is less affected. It's not such a percentage of cancellations that make us worry, it's just another example of the difficulties and adversities we have to face, he added, stating that this  is also the reason why the Deputy Ministry of Tourism and other tourism agencies are trying always have their feet on the ground.

The situation, said Mr. Perdios, does not raise excitement  since everything says  and the situation is changing. We have   he said, “the pandemic is still between us, and   no one knows in two to three months where we will be in relation to this matter”, adding that ” the impact on the Russian market but also on the Ukrainian it is not only for these three to four months, this impact will be continuous”.