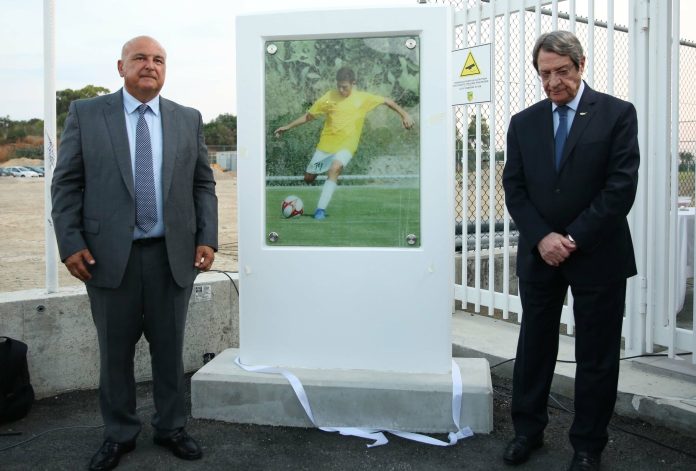 The Opening Ceremony and Naming of the Sports Center of the AEK Academy took place today (15/06) with all formality. The inauguration was performed by His Excellency the President of the Republic of Cyprus Nikos Anastasiadis. Nectar.

The announcement of the yellow-greens:

The speech of the President of our Association Mr. Andros Karapatakis followed:

“A dream of decades came true thanks to the collective effort and contribution of all of us. Our children are now playing on their own football roof at the AEK Larnaca Academic Sports Center, which today is officially renamed the AEK Larnaca Academic Sports Center Nikola Theodotou – in memory of the undefeated football player of our academies. The Board of Directors of our Association after the completion of the construction of the basic infrastructure of AEK ARENA, decided to proceed with the development of the infrastructure for the Football Academies. As in the case of AEK Arena, due to limited financial resources, this development will be completed in phases.

The First Phase of the Sports Center that we are launching today includes:

The construction cost of the A'Phase amounted to € 1,280,000 and was financed as follows: with an agreement for the service of Sports Tourism,

Today we declare before you that we are proceeding with the implementation of the Second Phase of the works, which will be completed in two parts. The first part includes the creation of 3 FUTSAL courts for children up to 12 years old, whose work, as you can see, has already begun and will be completed in 3 months. The second part that will be implemented at a later stage includes the construction of a Cafeteria, Coaches Locker Room, Sports Equipment Warehouse, and Gym.

You have associated your name with most of the development projects in our city, including AEK ARENA. You founded AEK ARENA – You inaugurated AEK ARENA and supported us financially both with a Special State Sponsorship and through the programs of KOA, which we publicly thank once again for the close cooperation. Today you are inaugurating the Sports Center of our Academies, sealing with your presence here your support both morally and financially.

The regular announcement of programs through the CMO and the Ministry of Tourism during your Presidency, gave us the opportunity to utilize the funds, turning another of our dreams into a project. special sponsorship.

Your Excellency Mr. President
You are very welcome
Distinguished guests

Your presence here honors us very much and we thank you “

Then we had the speech of His Excellency the President of the Republic of Cyprus Mr. Nikos Anastasiadis:

“With special pleasure I accepted the invitation addressed to me by the President and the Board of Directors of AEK, to inaugurate the Sports Center of the Academies of Nikolas Theodotou. Before any other mention, let me congratulate the management of the team for the initiative of naming the Center, honoring the memory of the football player of its Academies, Nikola Theodotou.

This decision is a recognition not only of the talent as a footballer, but also for the morale, kindness, consistency, patience and perseverance of the young Nicholas.
These are the characteristics that allowed him to bravely give any battle, and to become a beacon militancy for anyone going through his own Golgotha.

These very high principles and values, with which every person must walk, will remind his name from now on, to every child who will compete in this space.
I do not have the Sports Center that we are inaugurating today There is no doubt that it will strengthen the upward course of AEK, one of the most remarkable, I must admit, teams that play in our championship.

An upward course, which this year was accompanied by the success of participating, for the first time, in the qualifying round of the top inter-club football organization, the UEFA Champions League.

I hope that the draw that took place today is good, that it is passable the team.
At the same time I can not ignore the equally successful course recorded over time by the basketball and volleyball teams, as well as the distinguished presence in the KOP championships of all ages.

In this context, let me congratulate my dear friend the President Andreas Karapatakis and the members of the Board of Directors, for the successful course of the sports departments of the team.

At the same time, I would like to commend the initiatives that undertake, which, in addition to their own Association, contribute more widely to the multifaceted development of sports in our country.

Suffice it to note that the Sports Center we are inaugurating today, as well as the AEK Arena, which were a vision of the Management, are comparable to stadiums of top European clubs and are fully compatible with international operating standards and safety rules required by UEFA./p>

In this context, in addition to AEK and our national teams, they fully serve the needs of other teams in the league, but also abroad, thus promoting sports tourism.
Recognizing the benefits arising from the construction of the Sports Center, the State assisted in the implementation of this project as well.

In addition to its construction on a piece of land in the Republic of Cyprus, AEK received funding from both the Cyprus Organization Sports and the Ministry of Tourism totaling 590 thousand euros.

As, of course, the State strengthened the effort to build your excellent privately owned stadium, a real gem, with a contribution of 2 million euros.

In addition, promoting our further plans and especially of the Association regarding the implementation of privately owned indoor stadiums, the plot of land adjacent to the Sports Center has been leased through the Cyprus Sports Organization.

I am aware that for the Completion of the project you look forward to financial support from the State.

I want you to be sure that, to the best of our ability, and especially given the critical hours facing the global economy, we will be by your side.

I will consult with you and the Minister of Finance to see the possibilities that the state can contribute to this noble effort that you are making. I want you to be sure of that.

As we have already proved, as in the past, we are on your side now, as of course next to all the Associations without exception.

There are many footballers, coming from the Academies of AEK Larnaca who, in addition to their excellent course in various teams, brighten our National teams with their morale, but also their participation.

I am absolutely sure that the The Sports Center that we are launching today, as a new motivation and inspiration for even more young people to get involved in the sport of football, will be the new page of history for the Larnaca team.

A page that I am absolutely sure they will write with the example of the ethos, the dedication and the self-discipline with which Nikolas Theodotou played in this field and in all the stadiums.

In conclusion, I would like to congratulate once again the President and the members of the Board of Directors of AEK for the naming initiative, but also because in difficult times of financial austerity, the management managed to deliver sports facilities that truly honor our country./p>

At the same time, I want to congratulate the athletes and the fans of AEK, who, while staying away from fanaticism, honor with their presence in the sports fields, the history and the reputation of their team.

I wish good luck in view of the match obligations in the UEFA Champions League, where I am absolutely sure that you will repeat yourself writing a History for the Cypriot football “. President of our Association Mr. Andros Karapatakis. The plaque states:

IT WAS INSTRUCTED
TODAY JUNE 15, 2022
THE SPORTS CENTER OF AEK LARNACA ACADEMY
NIKOLAS THEODOTOU
BY THE EXCELLENT PRESIDENT
OF THE REPUBLIC OF CYPRUS
Mr. NIKOS ANASTAS
/p>

The speech of George Theodotos:

« The group is generally defined as the set of people with the same beliefs, who with their collective actions pursue a common goal. But when some separate actions take place within the group, then the concept of the group is transcended.

The decision of AEK to give the name of our Nikolas to the training center of its Academy, shows in the most obvious way that AEK is more than just a team. It is a family. A family that considers us its members.

There are no words to express our gratitude. Nikolas will now be part of the daily life of all the young football players of AEK who have a dream to play in the A 'team. The dream that he had but did not manage to realize. Nicholas loved sports and especially football. Those who knew him will surely remember his passion, but also his terrible perception of the ball. Despite his young age, he realized that football is not just a sport, a hobby, a profession. He knew very well that football is a way of life, that it teaches you to play, to discipline, to respect, to appreciate, to persevere and to endure. This has always been his way of life. All this characterized him at every step, culminating in the most difficult and important struggle of his life. When he showed us the greatness of his strength, courage and composure. Without losing for a moment his humor, patience and optimism. Nicholas taught us how to fight man, no matter what difficulties arise in his way, without ever bending, without complaining at any point of his ordeal. He taught us that the biggest winner is the one who, although he knows that the odds are against him, who knows that the end result does not depend solely on him, never gives up. Nor does he allow the others to put them down.

THIS was our Nicholas. Dear children of the Academy and friends of Nikolas, I strongly feel that Nikolas would like to address you at this time. Never stop trying, no matter how many obstacles you encounter on your way.

Always give 100% of what you do to yourself and have faith that success will come. And remember that successful people compete with themselves, improve their performance and keep getting better.

Dear friend, President of our AEK Andro, my dear friends, members of the Board of Directors, Joseph, George, Andrea, Afxenti, Evmee, every parent's concern is to see their child happy and happy. Thank you from the bottom of our hearts that today you made our child up there, our Nikolas happy, and at the same time so proud of his team. We are sure that the Road that Nikolas has paved passes through here, from the heart of AEK, the Sports Center of AEK Larnaca Academies Nikolas Theodotou “.

The Board of Directors of AEK Larnaca, honoring its general contribution to Sports, decided as it awards to the Supreme President of the Republic of Cyprus for his contribution to our Association and the Sports of Cyprus in general, a commemorative gift silver disk.

For The implementation of this project was significantly contributed either by funding or as Scholars People and companies that shared the same dream.