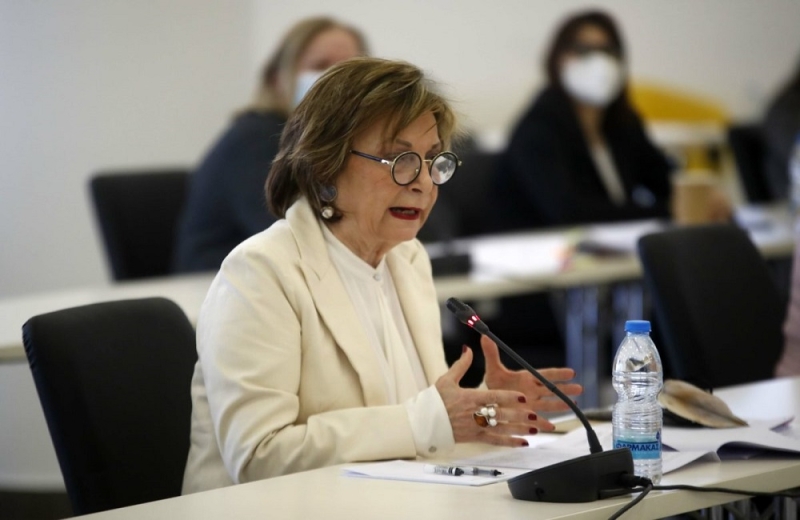 “Regarding the issue of the complaint of the Director of the Prison Department, Ms. Anna Aristotelous, against a Senior Police Officer, I duly requested and received relevant information, first from Ms. Aristotelous and then from the Chief. Stelios Papatheodorou “, the Minister of Justice and Public Order, Mrs. Stefis Drakou, states in a written statement.

“During my meeting,” he added, “I suggested to the Director of Prisons that, on the advice of her lawyers, she make a formal complaint, assuring her that all legal procedures would be followed for her full investigation.”

< p>“Regarding Ms. Aristotle's concerns for her personal safety,” he concludes, “in my meeting with Mr. Papatheodorou, I additionally called him to contact the Director of Prisons and to take all necessary measures for the her security, always in consultation with her “.

Assurances for her personal security were received from the Minister of Justice, Mr. Stefi Drakou, the director of the Prisons, Mrs. Anna Aristotelous, during their meeting today . The director of the Central Prison informed the Minister of Justice about the case with the senior police officer who put a prisoner to locate videos with her personal moments and other information that could affect her.

In statements after the meeting, the director of the Central Prison stated that “she has informed the Minister of Justice about the information in our possession and the involving the senior officer who was communicating with a varipoinite who was sentenced to many years in prison for drug trafficking “.

Subsequently, Ms. Aristotelous stated that she had received assurances from the Minister of Justice that “all legal actions will be taken, with all rigor.” The prisoner said she had spoken to her lawyers and would file a complaint with the Attorney General on Monday, requesting the appointment of independent criminal investigators. He even spoke about a huge corruption scandal which is unheard of for the Cypriot data.

“We will ask,” he said, “to make it available because many issues are being raised, including security issues.”

Asked to answer whether she received assurances from the Minister of Justice for her safety, Ms. Aristotelous replied that she also received assurances on this issue. “From the moment,” he said, “he is a senior officer who so lightly used his own cell phone and illegally communicated with a varipoinite, asking for videos from my personal life with the ultimate aim of destroying me and taking me away from position, you realize that in itself raises security issues. “

Remains in his duties senior officer

For his part, the Chief of the Police, Mr. Stelios Papatheodorou, stated that the Minister of Justice has requested a meeting to inform him in relation to the complaints of the director of the Prisons.

Arriving at the meeting with the Minister of Justice, Mr. Papatheodorou was asked about the appointment of independent criminal investigators, saying that “I do not know what the decision of the Attorney General is, but it may be better to be appointed from outside.” >

Asked to answer whether he is concerned about the complaint, the Chief of Police reiterated that he has been informed about the incident today and “that the Attorney General stated that he is waiting for the official complaint from Mrs. Aristotelous, we will see the progress of the case later”. He went on to say that “on the way I met Ms. Aristotle and told her that we should also discuss the issue of security, since as mentioned above there may be some danger.”

Asked what is provided in such cases , the Chief of Police replied that “this is not a simple criminal or disciplinary case against a member of the Police. The complainant also differs, and possibly the person to whom the complaints are directed. It's not a case that can be handled by a low-ranking police investigator. ” , but we will see what the complaint is and then we will see “. He was then asked if the officer would remain in office and the Chief of Police replied that “according to the regulations, you must have a written complaint to see the next steps”.

Source: politis.com.cy
Share
Facebook
Twitter
Pinterest
WhatsApp
Linkedin
Telegram
Previous article
One tenth of low wild vegetation burned by fire in an area of ​​Xylofagou Community
Next article
The second who stays in the team, Spanos and the search for an analyst
- Advertisement -