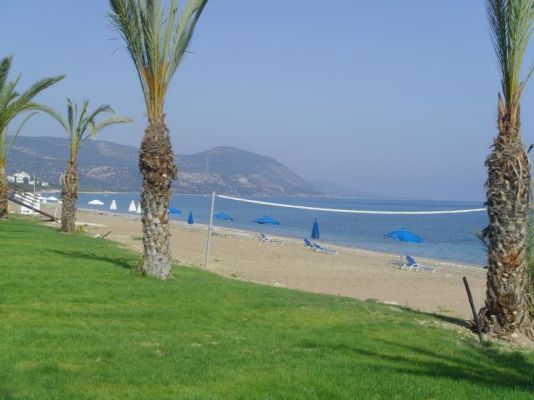 The Commissioner for the Environment, Klelia Vassiliou, sent a letter to the Ministers of Interior and Agriculture, Rural Development and Environment yesterday, on Monday, for the establishment of groups of technocrats from the public and private sectors, to start a public debate that will lead to beneficial and effective implementation of the very important Protocol to the Barcelona Convention for the Integrated Management of the Mediterranean Coastal Zone.

In a written statement, following a complaint from the Ecologists' Movement that the owner of a well-known restaurant in Latchi seems to have done illegal work within the beach protection zone to support the illegal expansion of his restaurant, the Environment Commissioner said, after receiving information yesterday from the Coast Guard of the District Administration of Paphos and confirmed by the District Supervisor, indeed work was done during the weekend which concerned the repair and restoration of an existing installation (deck) and not an extension, since it was affected by strong winter storms.

In the written statement, the Commissioner states that there is indeed a problem, which since the summer has been pointed out to both the Paphos District Administration and the Municipality of Poleos Chrysochous, regarding the licensing standard of companies.

“Already in the summer I pointed out to the Municipality of Polis Chrysochous the need to redesign the area based on new standards in both urban and environmental criteria, in order to re-evaluate the permits and remove those facilities that do not meet the permitting criteria based on environmental Ms. Vassileiou adds, adding that “the Mayor has informed me that the Municipality is in the third phase of a study for the landscaping of the coastal front of Latsi.

Reiterating that the need to protect the beach is non-negotiable, as non-negotiable is the need for all of us to move towards practices that will not harm the environment, but also will not endanger the sustainability of the earth's resources and ecosystems. The Commissioner states that the relevant photos, which saw the light of day, simply indicate the chronic problems which, with the removal of awnings, benches, etc., and expose the chronic problem that has remained the same for the last ten years and with the deck extensions. from all companies.

Concluding, Ms. Vassiliou states that her Office has been monitoring the issue since last June, trying to provide a holistic solution to a chronic multifaceted and complex issue by counting all the components.